I have put these articles together as a resource so you can start to join the dots for yourself and make up your mind whether all the media reports are true or whether there might have been a leak from a bio weapons lab in Wuhan.

What are those patents for coronavirus about?

Why, if we were warned just months ago is this such a surprise?

Let's start with the obvious. 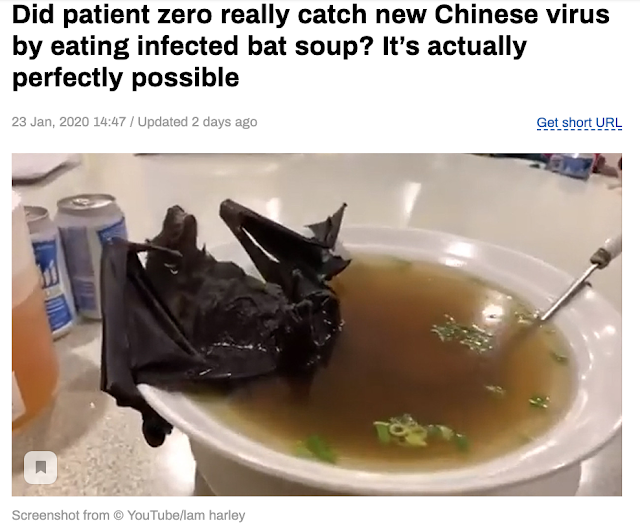 A group of Chinese scientists today reported that the likely source of the deadly 2019‐nCoV virus is snakes, based on genetic analysis. However, grisly images from a Chinese restaurant suggest bats may also be on the menu.
Their findings were fast-tracked to publication yesterday in the Journal of Medical Virology, and report that infected people were exposed to various wildlife species at the market, where live poultry, seafood, bats and snakes among others, were present. 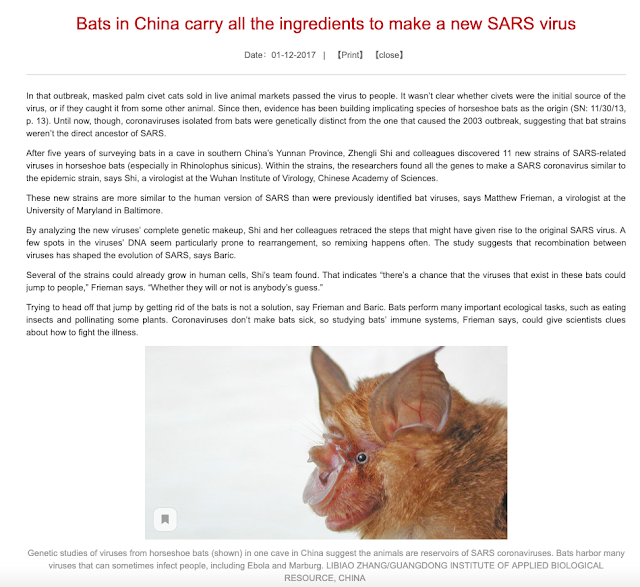 After five years of surveying bats in a cave in southern China’s Yunnan Province, Zhengli Shi and colleagues discovered 11 new strains of SARS-related viruses in horseshoe bats (especially in Rhinolophus sinicus). Within the strains, the researchers found all the genes to make a SARS coronavirus similar to the epidemic strain, says Shi, a virologist at the Wuhan Institute of Virology, Chinese Academy of Sciences.

These new strains are more similar to the human version of SARS than were previously identified bat viruses, says Matthew Frieman, a virologist at the University of Maryland in Baltimore

Snakes Could Be the Original Source of the New Coronavirus Outbreak in China
A study of the virus’s genetic sequence suggests similarities to that seen in snakes, but the origin must still be verified 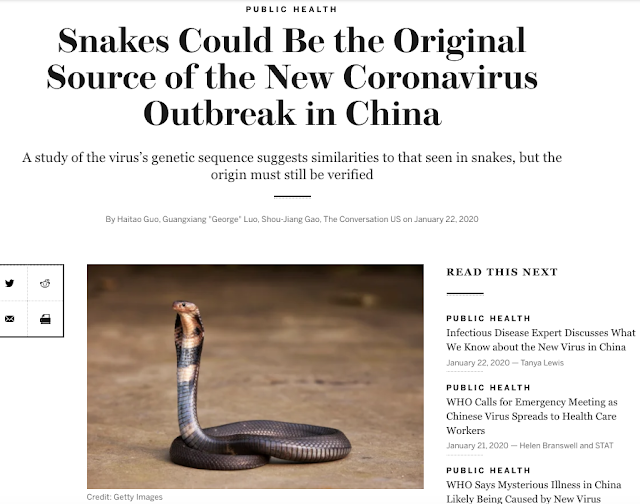 Then there is the question of those patents that have been taken out. 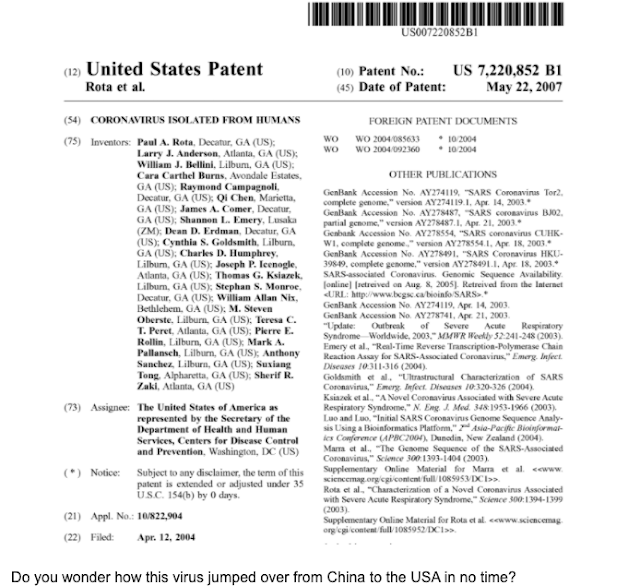 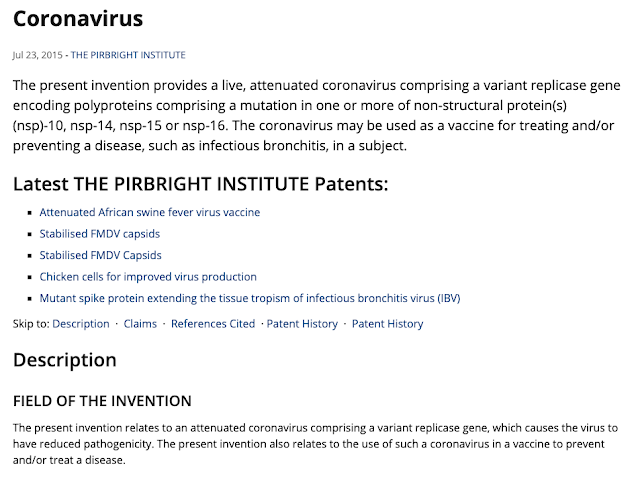 This is interesting. If one was looking at possible biowarfare against the people of China this might be what one might look out for. 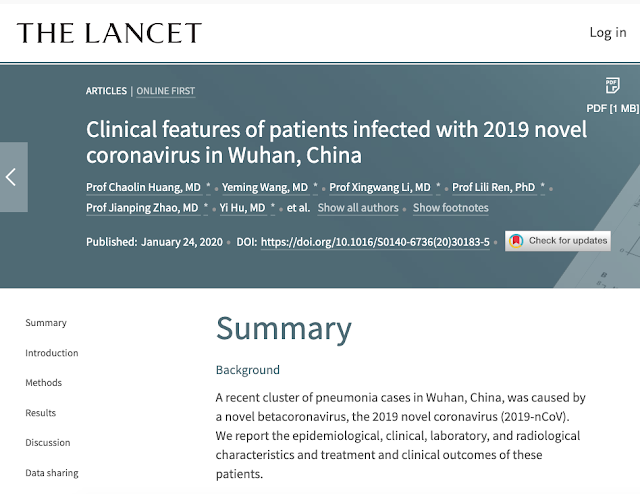 As the world waits for the official Status of this Outbreak to be called what it really is in Reality, A Pandemic emerging under our eyes and noses, and entering through the same sources, there is something besides its being "new" that is very Novel indeed.

The first true independent (not from china) Clinical Features Analysis and report from those who have actually died or been hospitalised from it, from the very prestigious Lancet Journal of Medicine shows some very interesting Info that is NOT being observed or reported.

Firstly forget the Meme it is the very sick and old who are mainly dying. Not statistically correct. The Median Age is late 40's

Secondly it is very it seems partial to infecting placing in ICU a LOT more Men than women in all of its parameters, ie if comorbitity is present, age factors etc.

AT TIME OF DATA ANALYSIS:

Of interest is the following on how the disease progresses

"The median duration from illness onset to

So 11 days or so, after bad symptoms those who are very sick with it, are in ICU on a ventilator or they will die.

Enough ICU? respirators in quarantined wards plus regular trauma and ICU after accidents and operations in your local area in the developed world, to take you in with Pneumonia?

The Third world ... well what chance, terrible things will happen because of this in Africa.

This is very real, a pandemic as we can all see it has the feathers, looks like a chicken, walks and talks like one to, so its what no one is admitting yet, until next week maybe, the week later at most.

As with all talk of Lab generated etc for those no agreeing to natural Zooonic virus mutation, the initial statistical Preference to Affect and Kill Males seems unique and novel among virus, I am unaware of any others like this.

In addition as a weapon to knock out the fighting capacity of an Enemy, with the largest population on earth so many hundreds of millions to spare after the great Cull, it could be seen if this proves true in larger data analysis as a bit Dr Strangelove like.

If its just a natural Feature of the Virus its surely new, against the backdrop of the recent known attack on the Traditional Gender structures of society and history, especially noted by many being bended, undermined in education, media and society etc, this novel feature seems either like a Cosmic Joke or maybe even something more.

Certainly just for planning and preparation and impact modelling on societies, etc for the course of this world threat, I find it interesting no one else has picked up on or mentioned this already, either in conspiracy circles or the MSM or Alternative media or the scientists.

Last year a simulation was done with devastating results.

Health experts issued an ominous warning about a coronavirus pandemic 3 months ago. Their simulation showed it could kill 65 million people. 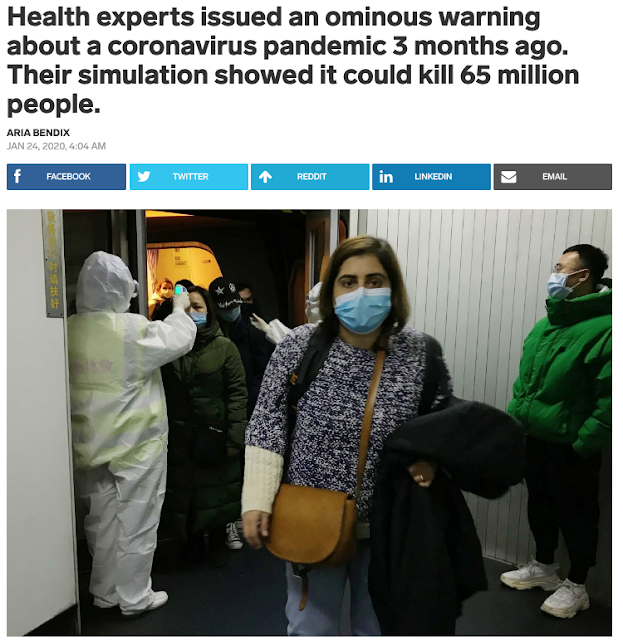 See who may have been behind this.

Bill and Melinda Gates Foundation & Others Predicted Up To 65 Million Deaths Via Coronavirus – In Simulation Ran 3 Months Ago! 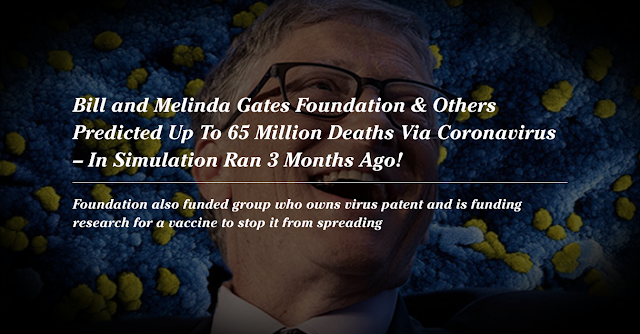 The Bill and Melinda Gates Foundation co-hosted a pandemic exercise in late 2019 that simulated a global coronavirus outbreak.

They also just happen to fund the group who owns the patent to the deadly virus and are working on a vaccine to solve the crisis.
On June 19, 2015, the UK government-funded Pirbright Institute filed an application for a patent for the live coronavirus, which was approved on Nov 20, 2018.

Arguments have been ongoing about Coronavirus

The creation of a chimeric SARS-like virus has scientists discussing the risks of gain-of-function research. 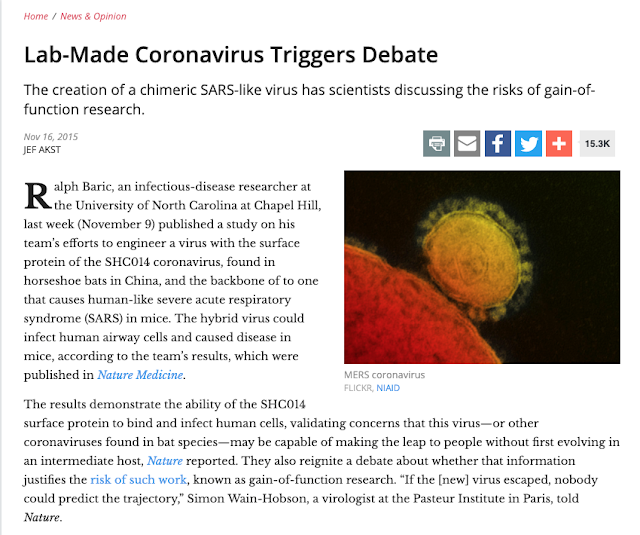 Ralph Baric, an infectious-disease researcher at the University of North Carolina at Chapel Hill, last week (November 9) published a study on his team’s efforts to engineer a virus with the surface protein of the SHC014 coronavirus, found in horseshoe bats in China, and the backbone of to one that causes human-like severe acute respiratory syndrome (SARS) in mice. The hybrid virus could infect human airway cells and caused disease in mice, according to the team’s results, which were published in Nature Medicine.

The results demonstrate the ability of the SHC014 surface protein to bind and infect human cells, validating concerns that this virus—or other coronaviruses found in bat species—may be capable of making the leap to people without first evolving in an intermediate host, Nature reported. They also reignite a debate about whether that information justifies the risk of such work, known as gain-of-function research. “If the [new] virus escaped, nobody could predict the trajectory,” Simon Wain-Hobson, a virologist at the Pasteur Institute in Paris, told Nature.

Interesting! Only in 2017 (under Trump) a ban on making lethal viruses was LIFTED.

A Federal Ban on Making Lethal Viruses Is Lifted 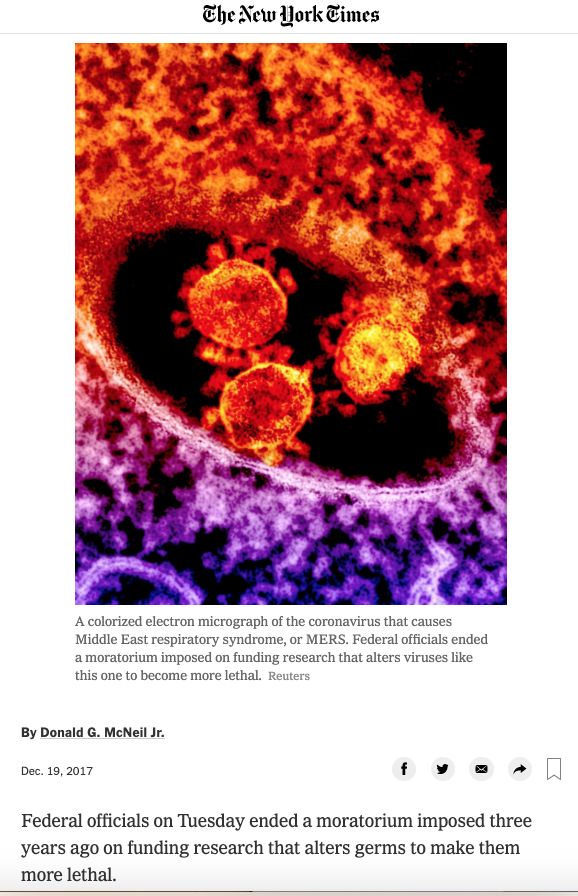 Federal officials on Tuesday ended a moratorium imposed three years ago on funding research that alters germs to make them more lethal.

Such work can now proceed, said Dr. Francis S. Collins, the head of the National Institutes of Health, but only if a scientific panel decides that the benefits justify the risks.

Some scientists are eager to pursue these studies because they may show, for example, how a bird flu could mutate to more easily infect humans, or could yield clues to making a better vaccine.

Isn't it interesting that like Porton Downs in the Skripal case in Britain there is a lab of this sort in WUHAN and it happens to be the biggest in the world!

The Wuhan National Biosafety Laboratory is the only lab in China designated for studying dangerous pathogens like SARS and Ebola: Coincidence? Had annual safety drill days before outbreak! 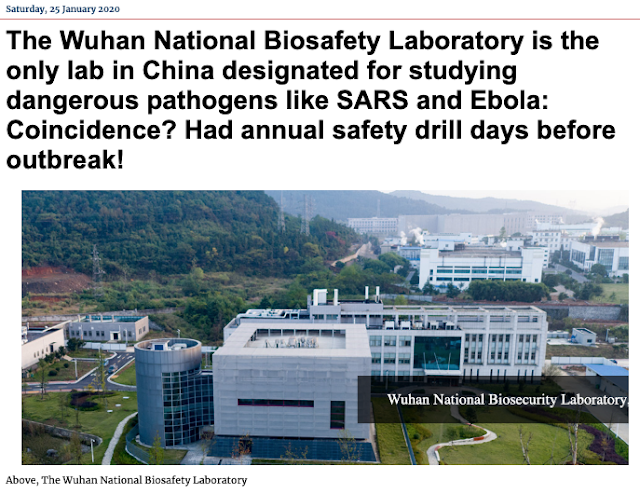 Now, this was interesting. 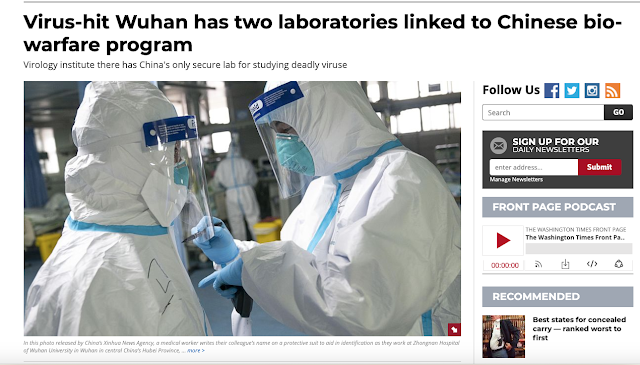 “Certain laboratories in the institute have probably been engaged, in terms of research and development, in Chinese [biological weapons], at least collaterally, yet not as a principal facility of the Chinese BW alignment,” Mr. Shoham told The Washington Times.

Work on biological weapons is conducted as part of a dual civilian-military research and is “definitely covert,” he said in an email. 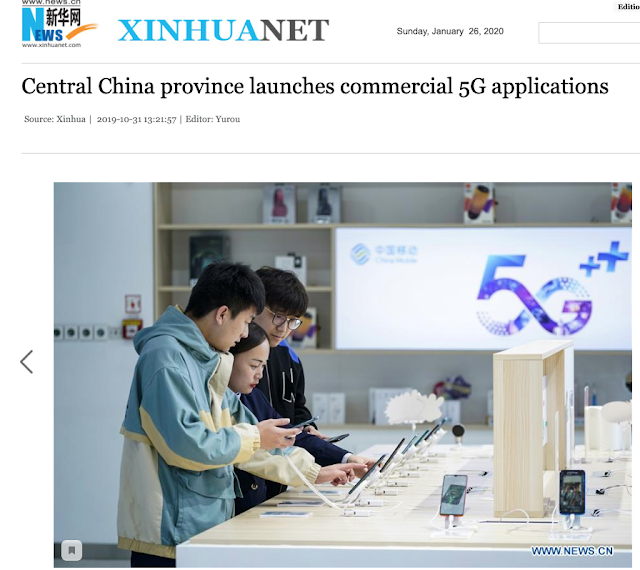 The branches of Chinese major telecom operators in central China's Hubei Province announced Thursday the launch of commercial 5G applications in the province.

Wuhan City, the capital of Hubei, is expected to have 10,000 5G base stations by the end of 2019, said Song Qizhu, head of Hubei Provincial Communication Administration.

China Telecom has established a 5G network covering airports, railway stations and other areas in the city, which will also help boost the digital and intelligent transformation of the industries with 5G technologies, said Li Hongbo, general manager of the company's Hubei branch.

China Mobile Hubei Branch has activated 1,580 5G base stations in the city as of mid-October, achieving the 5G coverage of universities, transportation hubs and other densely populated areas, according to the branch.


Does the virus incubate and then attack the central nervous system?

Hal Turner is reporting to his subscribers that the British Government has done a Genome Sequencing of this new virus and report that the disease striking China is a highly modified strain of Flu with a separate neurological/Central Nervous System (CNS) disease payload in it.

In other words, the flu is just the mechanism to transport the CNS payload.

The initial onset of flu-like symptoms can creep along making the victim sick and weak. Within about ten days, they begin to show signs of improvement and recovery, (I have seen reports of this) but in reality, the second disease is creeping into the brain and attacking the CNS.

A few days into the "recovery" the victim suddenly finds themselves unable to breathe; they hurl a large volume of blood from their lungs, collapse, and fall down dead within minutes.

This is what this video seems to indicate. How many people just drop dead on their face?

Doctors around the world have already noted what they call "mutations" in the virus. But it now appears that these "mutations" are actually the Bio-weapon coming into its own!

This was the final conclusion reached.

I have not been able to confirm any of this.


I recorded this conversation with Margo today