Another headline that was very easy to miss. 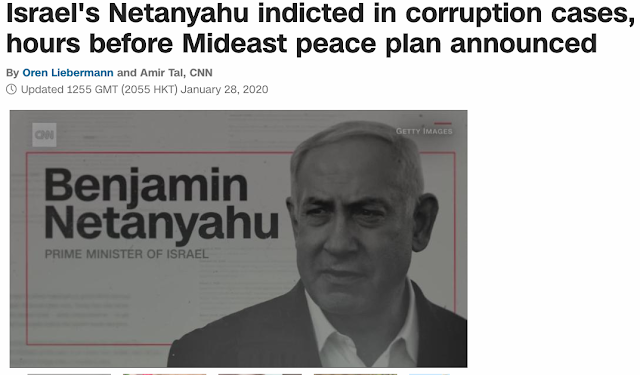 Israeli Prime Minister Benjamin Netanyahu was formally indicted on corruption charges Tuesday, just hours before he was set to meet President Donald Trump for the unveiling of the US administration's long-anticipated Middle East plan.

Netanyahu has been charged with bribery and fraud and breach of trust in three separate corruption cases. Attorney General Avichai Mandelblit submitted the indictment in Jerusalem District Court on Tuesday shortly after Netanyahu withdrew his request for parliamentary immunity, a request he was almost certain to lose.

Netanyahu has insisted he is innocent, calling the investigations an "attempted coup" driven by the left and the media.
The charges in court mean that Netanyahu will be the first sitting prime minister to face trial in the country's history. A trial date has not been set yet, but the legal process could possibly take years.
Under Israeli law, Netanyahu does not have to resign upon indictment. Instead, he only has to resign if he is convicted and that conviction is upheld through the appeals process.
The Knesset was due to start debating Tuesday whether to convene the committee tasked with weighing the immunity request. Lawmakers appeared certain to reject his bid, a factor likely to have influenced Netanyahu's decision not to proceed.
Trump says administration&#39;s Middle East plan to be unveiled Tuesday
Trump says administration's Middle East plan to be unveiled Tuesday
The Trump administration's plan to end the Israeli-Palestinian conflict will be released with Netanyahu standing next to Trump, in a powerful image for Israel's embattled leader, reinforcing his claim that this is a "historic" opportunity.
"At this fateful hour for the people of Israel, while I am in the United States on a historic mission to shape the final borders of Israel and safeguard our security for generations to come, another show in the immunity-removal circus is set to begin," Netanyahu wrote on his Facebook page before his indictment.
Renewing his strategy of seeking to delegitimize the corruption cases and the investigation process, Netanyahu added: "This is the continuation of a personal and obsessive hunt against me by the 'Anyone But Bibi' people. Instead of understanding the magnitude of the hour and rising above political considerations, they continue to deal in cheap politics that endangers a crucial moment in the history of the nation.
"I will not allow my political opponents to use this matter to interfere with the historical move I'm leading," he said.
Rival Benny Gantz, whose Blue and White party emerged the largest in the Knesset after the last elections, said Netanyahu cannot lead the country and deal with his legal problems.
"Netanyahu goes to trial. We must proceed," Gantz said on Twitter.
"The citizens of Israel have a clear choice -- a Prime Minister that will work for them or a Prime Minister dealing with himself. No one can run a country and at the same time run three severe criminal cases on bribery, fraud and breach of trust."
Political deadlock
The charges against Netanyahu, which relate to three separate corruption cases, were unveiled in November.
Prosecutors say that in the most serious case, known as Case 4000, Netanyahu advanced regulatory benefits worth more than 1 billion shekels (approximately $280 million) to his friend, millionaire Shaul Elovitch, who owned the Walla! News website as part of his control of the Bezeq telecommunications company.
Prosecutors say that in exchange Netanyahu, who also served at that time as Israel's Minister of Communications, received favorable news coverage on Walla! as well as influence over the choice of stories and language used.
Netanyahu has maintained his innocence throughout the ongoing criminal proceedings, calling it an "attempted coup" led by the left and the media.
Meanwhile Israel has also been gripped by political deadlock, following elections in April and September, both of which failed to result in the formation of a new government.
Voters have a third chance to decide the fate of the country in March, though opinion polls suggest little change on the previous two results.