The Lancet reports an 83% infection rate for coronavirus

I woke up to this heartstopping headline this morning.

As he did not acknowledge his source I checked online and found the source of this information, which comes from the august British medical journal, the Lancet.

I really do have to acknowledge a debt of gratitude to Hal Turner (whom I don't agree politically at all) who has been at the forefront of bringing this information out and is being proven to be correct in both things.  I have no way of confirming but I suspect with everything that has come out subsequently he was right (or near right) with his figures when most people were still in a state of denial.

Having read that I can say that my response to this is not panic, or fear, or anger but a great Silence and a determination to make every day of my life matter. 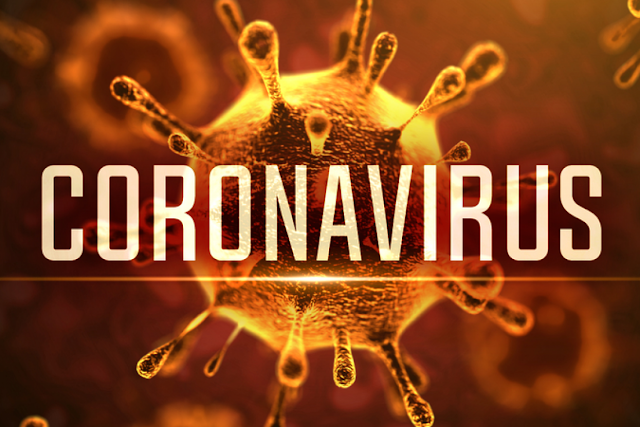 Here is the paper from the Lancet. 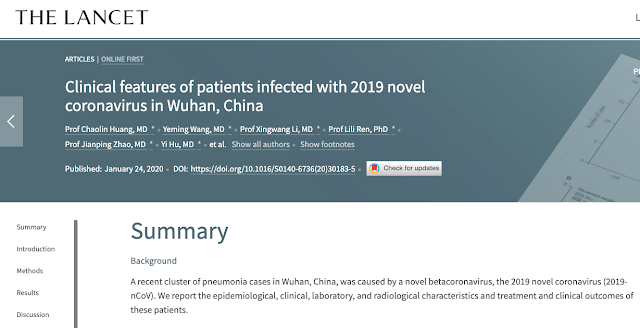 And another confirming article. 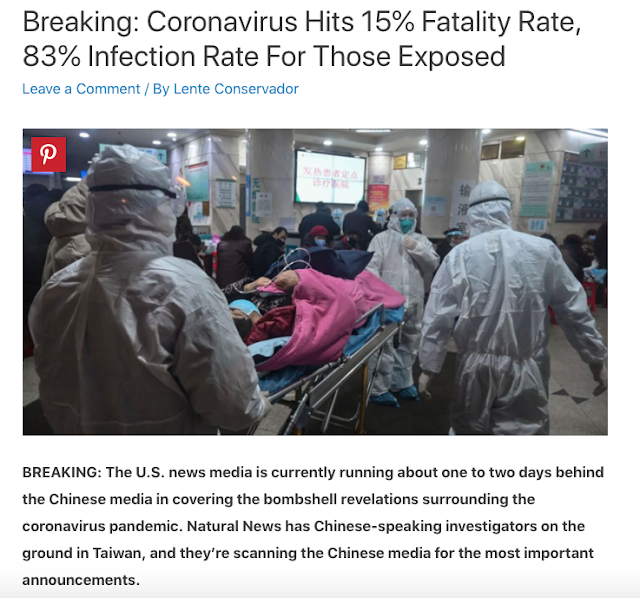 Here is Hal Turner's article.  I have truncated it a little by leaving out his advice for preparations. I may present that separately.

The first conclusive study of the new "novel Coronavirus" outbreak in China has been performed and the general public . . ."should get right with God."

The terrifying details of this study show, out of 100 people EXPOSED to the virus, 83% will contract it and get sick.   Of those 83 people, 12 WILL DIE. The outbreak is presently "unstoppable."

WORSE: The disease can spread from person-to-person via breathing.  And not just "close proximity" either.   If a person is in a store, supermarket, or bathroom, and either coughs or sneezes, the virus lingers in the air for several minutes. It can be blown several aisles over by interior heating or air conditioning systems. Anyone walking through it can become infected by either breathing it, or having virus particles (microscopic) land in their EYES, then travel through the tear ducts into the body.

TERRIFYING: This virus becomes contagious from one person to another BEFORE THE INFECTED PERSON HAS ANY SYMPTOMS!   So people who have no idea at all they're infected, are spreading this virus as they're out going about their routine affairs: Work, Shopping, etc.

The study is the first precise and conclusive study of THIS PARTICULAR SICKNESS and it's findings bear many of the hallmarks of a BIOLOGICAL WEAPON.

Interpretation:
The 2019-nCoV infection caused clusters of severe respiratory illness similar to severe acute respiratory syndrome coronavirus and was associated with ICU admission and high mortality. Major gaps in our knowledge of the origin, epidemiology, duration of human transmission, and clinical spectrum of disease need fulfillment by future studies.

The study goes on to admit there are ". . .major gaps in our knowledge . . ."  so as bad as this analysis proves to be, things may get very much worse.
But the most disturbing aspect of this study is this:

With 98% showing fever, this means that one out of 50 people infected will show no fever and therefore easily bypass current screening methods that are practiced by health officials.
If one in 50 infected people is able to get through screening that’s primarily looking for fever and respiratory symptoms, it means this outbreak is highly unlikely to be contained.

Put simply, if you, your spouse, your children, are out and about, doing what you usually do,  any or all of you MAY be "exposed" to this virus from other people who were in the area minutes earlier.  None of you have any way of knowing you've been exposed.

As of today, January 27, the Virus is ALREADY HERE, in America!   There are FIVE confirmed cases.  Seattle, Los Angeles, Orange County, CA, Chicago and Maricopa County, Arizona.   THe trouble is already here and it will spread.