I feel most remiss in having largely ignored the Australian bushfires in the last week.  My attention has been completely hijacked by a coronavirus pandemic.

Hundreds of Thousands of Fish Dead in NSW as bushfire Ash Washed into River: https://amp.theguardian.com/world/202...

Bushfire-Destroyed Homes Should Not be Rebuilt in Riskiest Areas, Experts Say:https://www.theguardian.com/australia...

The Australian Capital is under threat tonight as a massive bushfire emerges amid soaring heat and high winds.
A huge wall of flames moving over hills toward the Australian capital of Canberra tonight.
Images posted to social media show the terrifying display of Mother Nature, as massive flames consume the hills near the city.

“No one in south Canberra will sleep easy tonight. Hopefully the fire will be easier to control once it leaves the forest and enters the grassy plains. Hopefully,” – Canberra resident Nathanael Coyne.

I don't know how they're continuing to post updates to the fire boundary when there are no aircraft operating at night, but here you go. Looks like the homestead has been lost.

This shows the fire is about 4km from Tharwa and 8km from Banks. 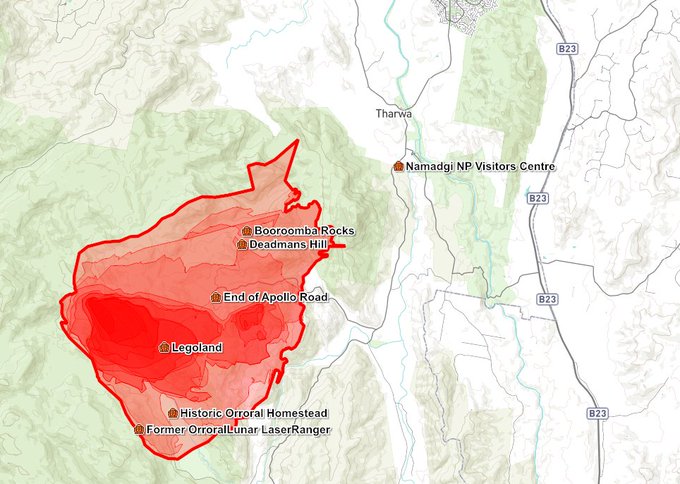 Nathanael Coyne@NathanaelB
No one in south Canberra will sleep easy tonight. Hopefully the fire will be easier to control once it leaves the forest and enters the grassy plains. Hopefully.

Earlier story:
Canberra Bushfire: A massive bushfire is fast moving toward Ausralia’s capital.
Outer suburbs of Australia’s capital Canberra are under threat from a massive blaze tonight.
The blaze is the worst fire emergency the city has faced since the devastating 2003 fires which hundreds of homes, the Chief Minister of ACT said.
From the emergency servies in the ACT:
“Fire situation near #Canberra is developing and escalating quickly this evening. Residents in southern areas & nearby parts of #NSW should check the latest information now, & then remain up to date through tonight.”
The ACT emergency services authority issued an emergency warning to residents of Tharwa at 4:30pm saying it was too late to leave and to seek shelter immediately.
“The fire may pose a threat to all lives directly in its path,” the advice said. “People in these suburbs are in danger and need to seek immediate shelter as the fire approaches.”
“The fire is also threatening properties in rural areas on Boboyan, Apollo, and Top Naas roads.”
The fire is fast moving and people are evacuating.
The southernmost suburbs of Canberra are within range of possible spotting/ember attacks from the massive blaze in the Nnamadgi National Park. The rural hamlet of Tharwa is already facing the beast.

Embers from the fire have already reached populated areas.

The Australian Defence Forces said the fire may have started when a helicopter landed in the area yesterday.
The bushfire ignited due to heat from a landing light on a military helicopter, a MRH-90 Taipan, which was conducting operations in Namadgi National Park, the Guardian said.

Chief Minister Andrew Barr said it poses the greatest risk to the ACT since the 2003 bushfires, which killed four people and destroyed hundreds of homes.
“This is the most serious situation we have faced since the 2003 bushfires,” Mr Barr said.
Winds are now gusting northeasterly at speeds up to 40km/h, according to ACT Emergency Services Agency (ESA) commissioner Georgeina Whelan.
“The weather this evening is not favourable for firefighters,” Ms Whelan said.
The ESA expects the fire to burn for several weeks.

The ACT has already been placed under a total fire ban for the remainder of January.
Emergency Services have forecast that the coming heat wave, which will bring predicted days over 40 degrees Celsius, will make it very difficult to control the fire.
Please refer to the ACT Emergencies website for the latest and most accurate information.
Much of it is burning in some of the most inaccessible terrain of the rugged Namadgi National Park.
Rural Fire Services Commissioner Joe Murphy said it was also burning quickly and erratically.
“This is not a fire that is operating under normal rules,” he said.


“We’re not going to get it out today, or any time soon. This is going to take significant effort.”
Posted by seemorerocks at 13:05