Winter ‘Heatwave’ to sweep QLD for the next week

A winter ‘heatwave’ is likely to sweep QLD (and much of Australia really) across the next week or more, seeing temperatures of up to 10ºc above average in parts of QLD during this period. Above image – Maximum Temperatures for Sunday (July 30th) via BSCH / OCF showing the heat still in place across large parts of the State.

Animated gif of the next 14 day temperature anomaly via Tropicaltidbits. Red or pink areas indicate temperatures exceeding the 4ºc heatwave threshold (pink is up to 14ºc above average)


Across the next 7 days at least, a high pressure system is expected to become planted over Southern QLD with a ridge extending into Northern and Central QLD. This entire system which is also likely to affect the majority of Eastern Australia, is likely to produce clear and sunny conditions for the most part (apart from some isolated showers along the Northern Tropical Coast). Its also likely to draw off a warm air mass situated over QLD resulting in an increase in daytime maximum temperatures.

Across South-Eastern QLD, the Darling Downs and Wide Bay, the typical 18-22ºc maximum temperature averages will be a far cry from reality. Although it has been abnormally warm already for the most part this month (Brisbane 0.7ºc above average, Dalby 2.1ºc above average, Gympie 1.3ºc above average), things are likely to be ramped up even further with a week of temperatures ranging between 5 and 8ºc above average and sitting in the mid to possibly even high 20’s for most locations. Out west its even worse with the majority of Western and Northern Inland QLD is expected to see temperatures more typical of mid Autumn or mid Spring, with maximums ranging between the high 20’s and low 30’s. This is a far cry from the low 20ºc temperatures which are typical of this time of year around Birdsville and the mid 20ºc temperatures which are seen around Mt Isa.

While technically speaking it isn’t a ‘heatwave’ given its only ‘Winter’ and temps are in the mid 20’s not mid 40’s. By numerical reality, it is a heatwave to a degree. What we mean by this is, the thresholds for heatwave criteria are about 4-5ºc above average for both maximum and minimum temperatures for at least 3 days.

Due to the clear skies, minimum temperatures are expected to be normal, if not below average with light frost still expected over the Darling Downs, Granite Belt and Western parts of South-East QLD most mornings. Its solely the daytime temperatures which are roasting. 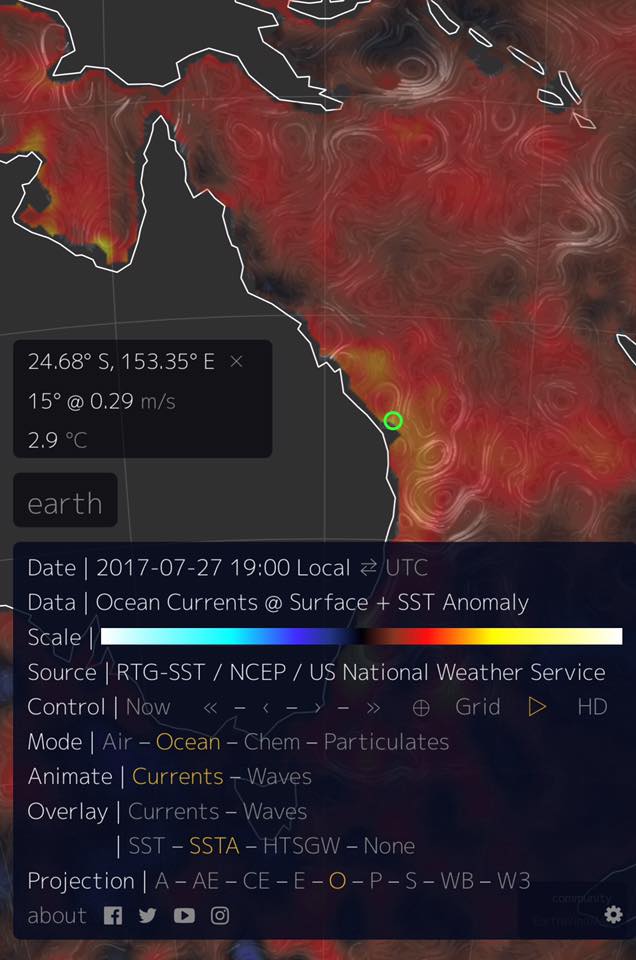 The Southern Great Barrier Reef is now in its 6th day above 2C anomaly - the threshold for coral bleaching. Global warming is destroying the worlds reefs.

Last year it took until October to get this warm.

Info provided by Weatherzone
Posted by seemorerocks at 18:04