On the sixth extinction 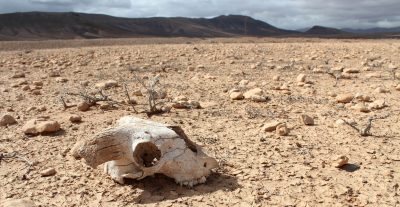 Human beings are now waging war against life itself as we continue to destroy not just individual lives, local populations and entire species in vast numbers but also destroy the ecological systems that make life on Earth possible.

By doing this we are now accelerating the sixth mass extinction event in Earth’s history and virtually eliminating any prospect of human survival.
In a recently published scientific study ‘Biological annihilation via the ongoing sixth mass extinction signaled by vertebrate population losses and declines’ the authors Gerardo Ceballos, Paul R. Ehrlichand Rodolfo Dirzo document the accelerating nature of this problem.

‘Earth’s sixth mass extinction is more severe than perceived when looking exclusively at species extinctions…. That conclusion is based on analyses of the numbers and degrees of range contraction … using a sample of 27,600 vertebrate species, and on a more detailed analysis documenting the population extinctions between 1900 and 2015 in 177 mammal species.’

Their research found that the rate of population loss in terrestrial vertebrates is ‘extremely high’ – even in ‘species of low concern’.
In their sample, comprising nearly half of known vertebrate species, 32% (8,851 out of 27,600) are decreasing; that is, they have decreased in population size and range. In the 177 mammals for which they had detailed data, all had lost 30% or more of their geographic ranges and more than 40% of the species had experienced severe population declines. Their data revealed that ‘beyond global species extinctions Earth is experiencing a huge episode of population declines and extirpations, which will have negative cascading consequences on ecosystem functioning and services vital to sustaining civilization. We describe this as a “biological annihilation” to highlight the current magnitude of Earth’s ongoing sixth major extinction event.’ Lions in South and East Africa, like this male cat in Botswana, are better known than their cousins in West Africa, which tend to be smaller and are now highly endangered. (Source: PETE OXFORD, NATURE PICTURE LIBRARY/CORBIS)
Illustrating the damage done by dramatically reducing the historic geographic range of a species, consider the lion. Panthera leo ‘was historically distributed over most of Africa, southern Europe, and the Middle East, all the way to northwestern India. It is now confined to scattered populations in sub-Saharan Africa and a remnant population in the Gir forest of India. The vast majority of lion populations are gone.’
Why is this happening? Ceballos, Ehrlich and Dirzo tell us:

‘In the last few decades, habitat loss, overexploitation, invasive organisms, pollution, toxification, and more recently climate disruption, as well as the interactions among these factors, have led to the catastrophic declines in both the numbers and sizes of populations of both common and rare vertebrate species.’

Further, however, the authors warn

‘But the true extent of this mass extinction has been underestimated, because of the emphasis on species extinction.’

This underestimate can be traced to overlooking the accelerating extinction of local populations of a species.

Moreover, and importantly from a narrow human perspective, the massive loss of local populations is already damaging the services ecosystems provide to civilization (which, of course, are given no value by government and corporate economists).
As Ceballos, Ehrlich and Dirzo remind us:

‘When considering this frightening assault on the foundations of human civilization, one must never forget that Earth’s capacity to support life, including human life, has been shaped by life itself.’

When public mention is made of the extinction crisis, it usually focuses on a few (probably iconic) animal species known to have gone extinct, while projecting many more in future. However, a glance at their maps presents a much more realistic picture: as much as 50% of the number of animal individuals that once shared Earth with us are already gone, as are billions of populations.
Furthermore, they claim that their analysis is conservative given the increasing trajectories of those factors that drive extinction together with their synergistic impacts.

‘Future losses easily may amount to a further rapid defaunation of the globe and comparable losses in the diversity of plants, including the local (and eventually global) defaunation-driven coextinction of plants.’

They conclude with the chilling observation:

‘Thus, we emphasize that the sixth mass extinction is already here and the window for effective action is very short.’

Of course, it is too late for those species of plants, birds, animals, fish, amphibians, insects and reptiles that humans have already driven to extinction or will yet drive to extinction in the future. 200 species yesterday. 200 species today. 200 species tomorrow. 200 species the day after…. And, as Ceballos, Ehrlich and Dirzo emphasize, the ongoing daily extinctions of a myriad local populations.
If you think that the above information is bad enough in assessing the prospects for human survival, you will not be encouraged by awareness or deeper consideration of even some of the many variables adversely impacting our prospects that were beyond the scope of the above study. While Ceballos, Ehrlich and Dirzo, in addition to the problems they noted which are cited above, also identified the problems of human overpopulation and continued population growth, as well as overconsumption (based on ‘the fiction that perpetual growth can occur on a finite planet’) and even the risks posed by nuclear war, there were many variables that were beyond the scope of their research.
For example, in a recent discussion of that branch of ecological science known as ‘Planetary Boundary Science’, Dr Glen Barry identified ‘at least ten global ecological catastrophes which threaten to destroy the global ecological system and portend an end to human beings, and perhaps all life. Ranging from nitrogen deposition to ocean acidification, and including such basics as soil, water, and air; virtually every ecological system upon which life depends is failing’. See ‘The End of Being: Abrupt Climate Change One of Many Ecological Crises Threatening to Collapse the Biosphere’.

Moreover, apart from the ongoing human death tolls caused by the endless wars and other military violence being conducted across the planet– see, for example, ‘Yemen cholera worst on record & numbers still rising’ – there is catastrophic environmental damage caused too. For some insight, see The Toxic Remnants of War Project.

In addition, the out-of-control methane releases into the atmosphere that are now occurring – see‘7,000 underground gas bubbles poised to “explode” in Arctic’ and ‘Release of Arctic Methane “May Be Apocalyptic,” Study Warns’– and the release, each and every day, of 300 tons of radioactive waste from Fukushima into the Pacific Ocean – see ‘Fukushima Radiation Has Contaminated The Entire Pacific Ocean – And It’s Going To Get Worse’– are having disastrous consequences that will negatively impact life on Earth indefinitely. And they cannot be reversed in any time frame that is meaningful for human prospects.

Apart from the above, there is a host of other critical issues – such as destruction of the Earth’s rainforests, destruction of waterways and the ocean habitat and the devastating impact of animal agriculture for meat consumption – that international governmental organizations such as the UN, national governments and multinational corporations will continue to refuse to decisively act upon because they are controlled by the insane global elite. See ‘The Global Elite is Insane’ with more fully elaborated explanations in ‘Why Violence?’ and ‘Fearless Psychology and Fearful Psychology: Principles and Practice’.

So time may be short, the number of issues utterly daunting and the prospects for life grim. But if, like me, you are inclined to fight to the last breath, I invite you to consider making a deliberate choice to take powerful personal action in the fight for our survival.
If you do nothing else, consider participating in the fifteen-year strategy of ‘The Flame Tree Project to Save Life on Earth’. You can do this as an individual, with family and friends or as a neighbourhood.

If you are involved in (or considering becoming involved in) a local campaign to address a climate issue, end some manifestation of war (or even all war), or to halt any other threat to our environment, I encourage you to consider doing this on a strategic basis. See Nonviolent Campaign Strategy.

And if you would like to join the worldwide movement to end violence in all of its forms, environmental and otherwise, you are also welcome to consider signing the online pledge of ‘The People’s Charter to Create a Nonviolent World’.

We might be annihilating life on Earth but this is not something about which we have no choice.
In fact, each and every one of us has a choice: we can choose to do nothing, we can wait for (or even lobby) others to act, or we can take powerful action ourselves. But unless you search your heart and make a conscious and deliberate choice to commit yourself to act powerfully, your unconscious choice will effectively be the first one (including that you might take some token measures and delude yourself that these make a difference). And the annihilation of life on Earth will continue, with your complicity.
Extinction beckons. Will you choose powerfully?
Robert J. Burrowes has a lifetime commitment to understanding and ending human violence. He has done extensive research since 1966 in an effort to understand why human beings are violent and has been a nonviolent activist since 1981. He is the author of ‘Why Violence?’ His email address isflametree@riseup.net and his website is here.