4th heat wave upcoming in early August, peak of the season in some regions

Currently, Europe is in transition from a cooler period into a much warmer period as a large trough, which was in effect almost a whole week, is finally decaying. A progressive pattern change in ongoing as a large deep trough is entering western Europe from the Atlantic and should become stationary and will not continue further east. This will establish a significant warming over south-central Europe as an extensive upper ridge develops from SW Europe and Mediterranean into east-central Europe and partly also into southern parts of N Europe. The result will be a powerful heat wave over north-central Mediterranean and the Balkan peninsula, where afternoon temperatures will locally exceed 40 °C. Meanwhile, cooler temps are expected within the trough over W and partly also across SW Europe. 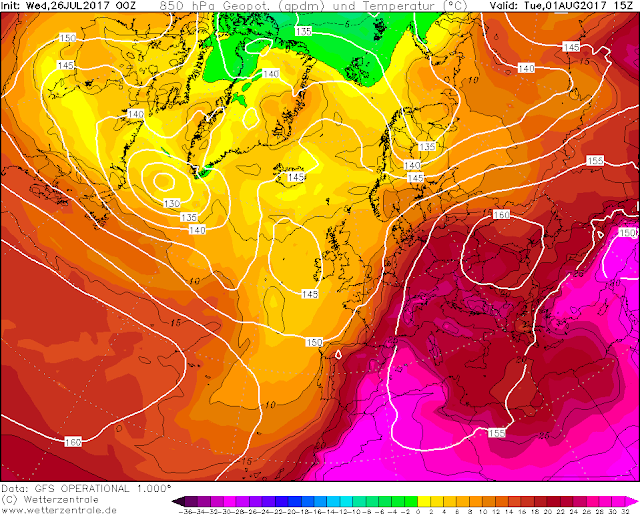 A look over the 850 mb temperature map revealing extremely warm temperatures extending from S Europe into N Balkan countries as a strong warm advection taken places under a developing ridge. Heat waves with 850 mb temperature around 25 °C are extreme, and it appears likely that daily averages will be much higher than usual with broad areas experiencing morning temperatures not falling below 20 °C (which is usually confined to coastal areas due to warm seas). 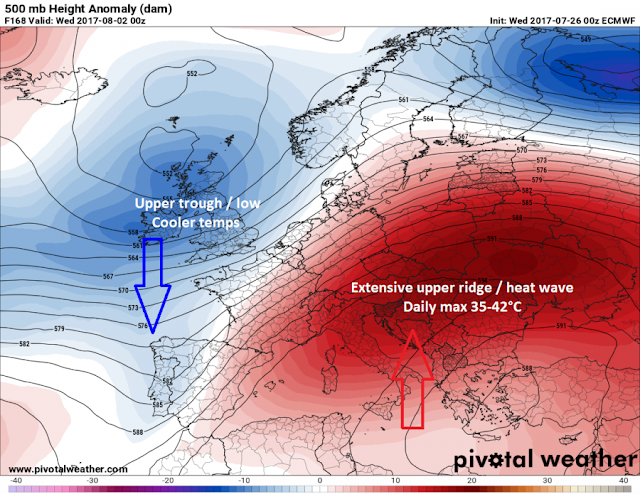 Early to mid next week, the ridge axis extends from the Mediterranean across N Balkan peninsula into NE Europe and starts the significant temperature anomalies. It appears likely that a couple of days could be more than 10°C warmer than usual, which means 850 mb well above 20°C. 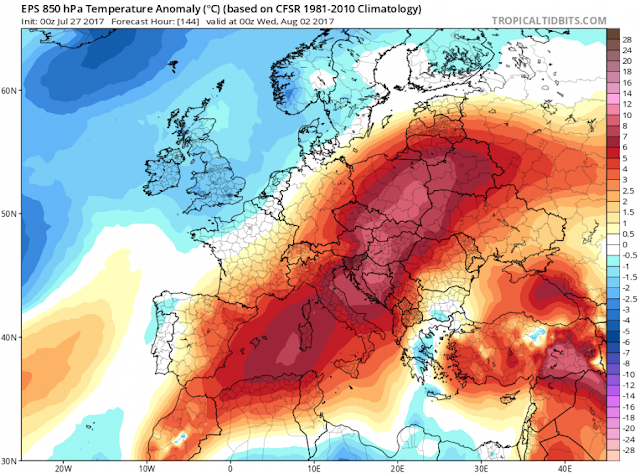 Animation of 850 mb temperature anomaly through the next 10 days – an obvious complete pattern flip from cooler weather into much warmer period!

Let’s face it, this has hardly felt like summer. Now we’ve got the numbers to prove it.

According to the Danish Meteorology Institute (DMI), July is likely to end without a single ‘summer day’, which is defined as any day in which temperatures top 25C (77F) at least somewhere in Denmark.

If the next five days come and go without hitting 25C as predicted, it will mark the first time that Danes will have suffered through a summer-less July in nearly four decades.

“There are only three years in our records in which July contains a big fat zero when it comes to summer days and temps above 25C. That’s 1962, 1974 and 1979,” climatologist John Cappelen said on the DMI website.

The warmest day thus far this month was July 19th, when an almost-yet-not-quite-there 24.6C was recorded. There were only two days in all of June that qualified as a summer day, while May had five.

But meteorologist Klaus Larsen said that all hope is not yet lost.

“The prognoses for the last day of the month - Monday the 31st – are hopping back and forth over the magic point. Until then there are no real signs that we will get over 25C so no matter what we are looking at a meteorological photo finish,” he said.

Before banking on Monday to break July’s sad streak, perhaps it’s worth a reminder that DMI wrongly predicted we would top 25C last week.

Oh well, we can always hope against hope that August is better.

More than 12,000 evacuated residents and tourists in the south of France began to return to their homes and holiday places after firefighters tamed one of the fiercest blazes to break out during four days of wildfires.

The fire in the Mediterranean seaside town of Bormes-les-Mimosas in the southern Var region calmed Thursday because of a drop in the wind — but still marked the skyline with clouds of black smoke that were visible for miles.

Local authorities said that while it was safe for people to return to places they'd evacuated in the Bormes-les-Mimosas area, the fire risk remained at its highest level in other parts of the Var region.

Despite the progress, authorities fear there may be new fires and flare-ups due to dry conditions and higher winds in weather forecasts. Firefighters are still battling blazes in Artigues, some 100 kilometers (62 miles) away from Bormes-les-Mimosas.
Before being allowed to go back to their homes and campsites, evacuees were being housed in makeshift shelters. A sailing club near Bormes-les-Mimosas was hosting 200 people, including tourists, who were evacuated Wednesday night. 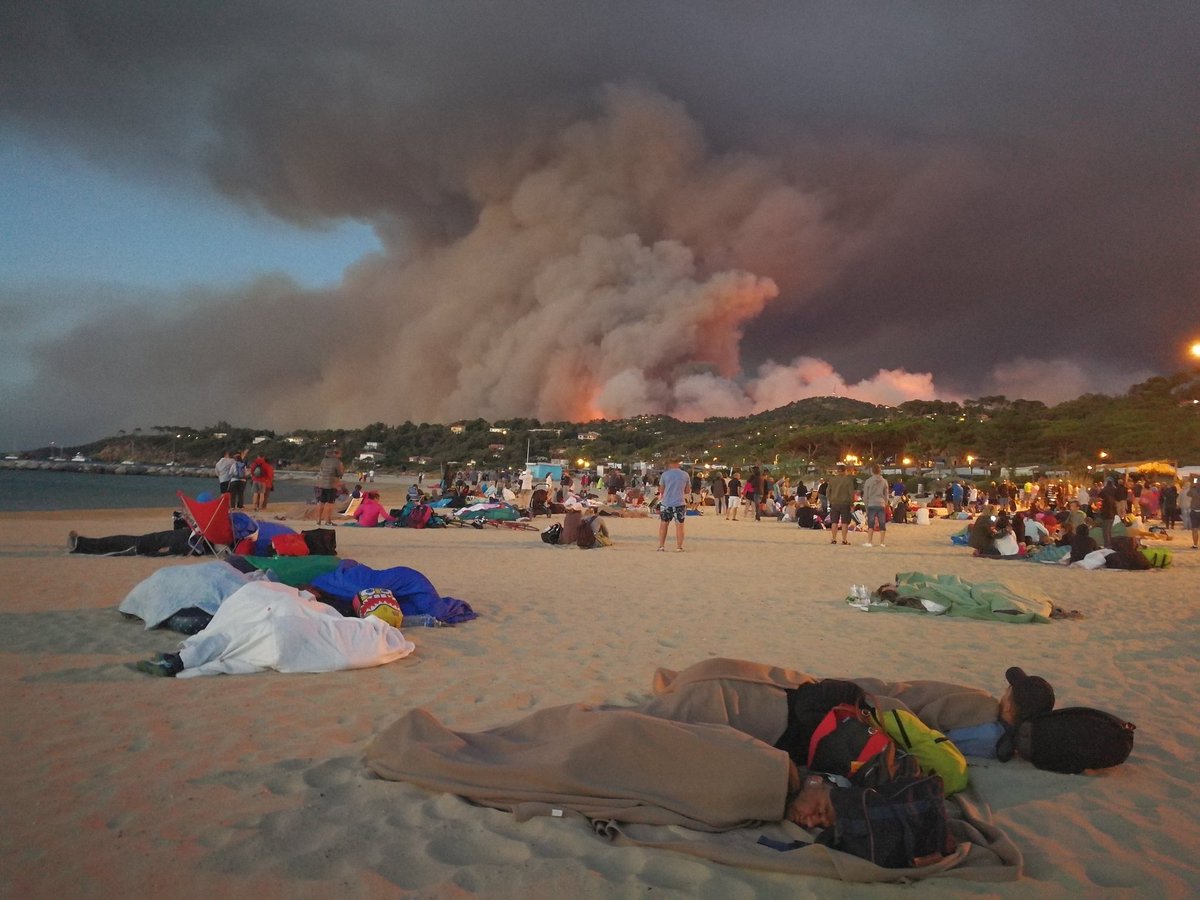 One displaced French camper, Stephanie Reiny, who slept at the sailing club, was upbeat on learning that the firefighters were making progress. "I will go straight away to the camping site for sure ... I'm not scared anymore," she said.
Some 3,000 firefighters have been deployed to contain the flames that broke out Monday in the southeast of France and on the island of Corsica. The fires so far have consumed 7,000 hectares (17,300 acres) of trees and other vegetation.
There have been no reported casualties.
French commentators fear the devastation in Bormes-les-Mimosas and other damaged areas will keep visitors away and disrupt the tourism on which the Riviera's economy relies.
As helicopters and planes carrying water flew overhead, Bormes-les-Mimosas Mayor Francois Arizzi told reporters Thursday he felt "sadness and anger."
"Seeing heritage like this going up in flames is sad. It's a lifetime's effort from local people that is destroyed," Arizzi said.
Arizzi also accused unknown "harmful" individuals of starting the fires, though did not explain why he thinks the blazes were human-caused.
"I'm not an investigator, but we have to stop closing our eyes to the facts. We need to find the persons responsible and punish them so that they don't do it again," the mayor said.
"Behind all this there are lives in danger, men who are working day and night, and they are putting their life in danger for the safety of others," he added