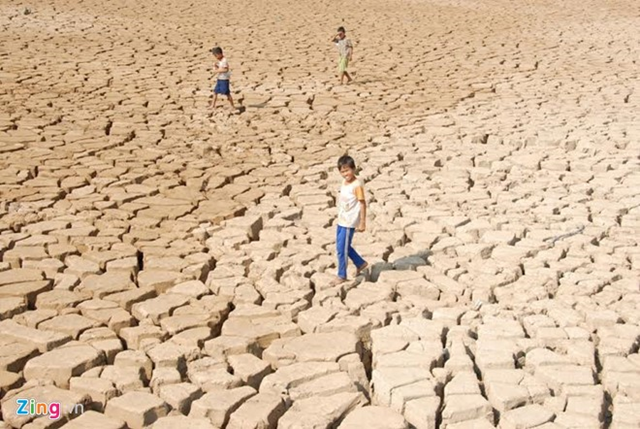 The drought could result in the loss of up to 1 million tons of rice, but is not expected to affect Vietnam's status as the world's third largest exporter of grain, said Ma Quang Trung, a department director at the Agriculture Ministry.

Vietnam exports an average 7 million tons a year, behind Thailand and India. Thailand too has been hit hard by the drought.

The water shortage could drive many farmers into poverty, especially if there are no rains between now and the peak of the dry season in late April, Trung said.

He blamed the drought on the El Nino weather phenomenon and excessive construction of more than 10 hydropower dams on the upper stream of the river.

Binh also said the ministry was working with China and other Mekong River countries toward sustainable use of the river's resources.

The level of inland saline intrusion was unprecedented, resulting in damage to some 180,000 hectares (444,780 acres) of paddy fields, Trung said.

The government has provided some $1.5 million in aid to farmers in three most affected provinces in the delta, according to state media. 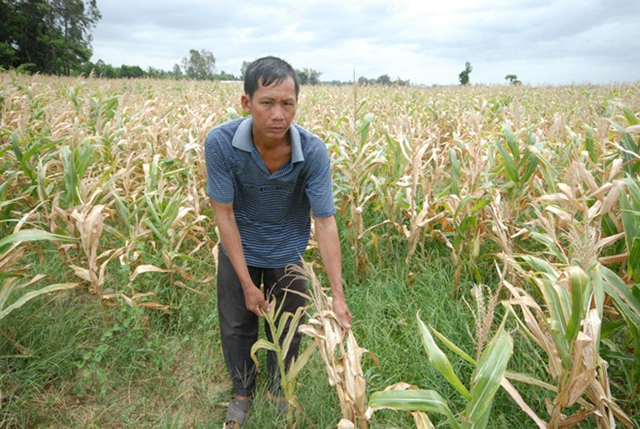 31 March 2016 (VietNamNet Bridge) – Just within five days, the rice price in Mekong River Delta increased by VND300-350 per kilo after the forecast about poor crop.

Pham Thanh Tho, a rice merchant at Ba Dac wholesale market in Tien Giang province, said on March 19 that fresh IR 50404 is now priced at VND5,000 per kilo, higher by VND350 per kilo than five days before, while IR 50404 material rice is being traded at VND7,100 per kilo.

Tho said the price has soared because of strong demand and short supply.

“The demand is very high. A big volume of rice is carried to the north,” he said.

Nguyen Dinh Bich, a rice analysis expert, said the demand from China is very high. The US Department of Agriculture (USDA) predicted that China would import 5 tons of rice this year.

“They (China) know the drought is occurring in Mekong River Delta and they have boosted purchases,” Bich said.

Huynh The Nang, chair of the Vietnam Food Association (VFA) and CEO of Vinafood 2, the Vietnamese biggest rice export corporation, said Vietnam had signed contracts on exporting 2.248 million tons by the end of February, up by 63.25 percent compared to the last year’s same period. This includes the contracted 1.12 million tons carried forward from 2015.

As Vietnam has delivered 856,000 tons, it would still have to deliver 1.392 million tons from March, an increase of 46 percent compared with the same period last year. This includes 365,000 tons for government-to-government contracts and 1.027 million tons for commercial contracts.

Meanwhile, the supply is getting short because of the serious drought and saline intrusion in Mekong River Delta, the rice granary of Vietnam.

Le Thanh Tung from the Ministry of Agriculture and Rural Development (MARD) told the press on March 18 that the rice output in Mekong Delta in the 2015-2016 winter-spring crop may decrease by 300,000 tons compared to last year. Some other sources said the decrease may be up to 1 million tons.

“Those who have rice in hands will make fat profits,” Phong said. 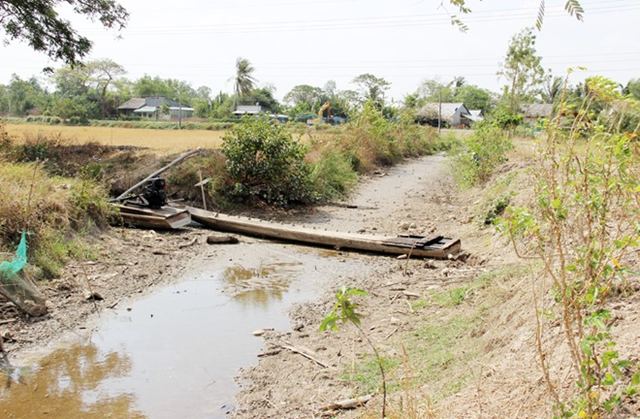 HANOI, 5 March 2010 (IRIN) – As temperatures rise in Vietnam, a nationwide drought has dried up riverbeds, sparked forest fires and now threatens one of the world's richest agricultural regions, upon which millions depend for their livelihoods.

Water levels on the Mekong River are at an almost 20-year low, largely as a result of the rainy season ending early and a precipitous drop in water flow upstream, he said.

With virtually no rainfall in the north since September, fires have burned through the northern provinces of Lao Cai and Lai Chau. In central Vietnam, sustained temperatures of about 38 degrees Celsius have sent hundreds to local hospitals.

According to the Ministry of Natural Resources and Environment, the heat and humidity have sparked a plague of insects and worms, which have eaten through thousands of hectares of rice paddies.

The drought conditions in the delta are also being felt in other Mekong countries because of the early end to the 2009 wet season, as well as low monsoon rainfall.

The Mekong River Commission, a regional monitoring body, on 26 February warned of significantly lower than average water levels on the Mekong River in Laos and Thailand, which it says will affect the economic development of already impoverished people there.

The Red River, upon which millions of Vietnamese in the north depend for fishing and irrigation, is at its lowest in more than 100 years, according to records beginning in 1902. The drought has turned sections of the normally bustling river into sand dunes, bringing river traffic to a halt.

"Never before has the water been so low that most ships cannot move," said Nguyen Manh Khoa, from Phu Tho province, whose debts are piling up as his new boat sits idle. [more] 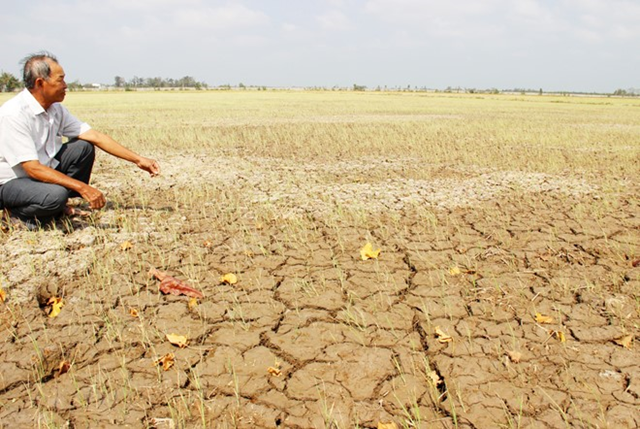 2 March 2016 (Al Jazeera) – Months of below-average rainfall have conspired to produce the worst drought in Vietnam in the best part of 100 years. It has been reported that the Mekong River is at its lowest level since 1926.

The ongoing El Nino weather pattern is thought to be the main cause of the lack of rainfall affecting the country.

Vietnam is not alone in suffering drought. Neighbouring Cambodia, and Laos, as well as Thailand and Myanmar, have been experiencing water shortages as a result of the weather phenomenon.

Vietnam's need for water is partly driven by its high reliance on agriculture as a source of income. The country is the world's second largest producer of coffee and rice, both high users of water. In addition, coffee is vulnerable to frosts and cold weather. In both 2013 and 2014 severe cold reduced the yield of the coffee crop.

The Mekong Delta has been worst affected by the lack of rainfall. The area has 2.2 million hectares of arable land. According to Le Anh Tuan, professor of climate change at Can Tho University, as much as 40 to 50 percent of this land has been hit by salinisation.

As water availability decreases, salinity from irrigation tends to increase. All water contains dissolved salts; when plants have absorbed the water, they leave behind the salts which accumulate. Over time, increasing salinity makes it difficult for plants to absorb soil moisture, and these salts can only be removed by the roots of the plants by the application of additional water.

"We do not have any specific measures to mitigate the situation," Tuan told the AFP news agency. He added that residents had been asked to save water for domestic rather than agricultural use. [more]

Vietnam hit by worst drought in nearly a century

In view of the above and everything else that's happpening I don't find this (apparently an April Fool's joke) at all funny or in good taste. 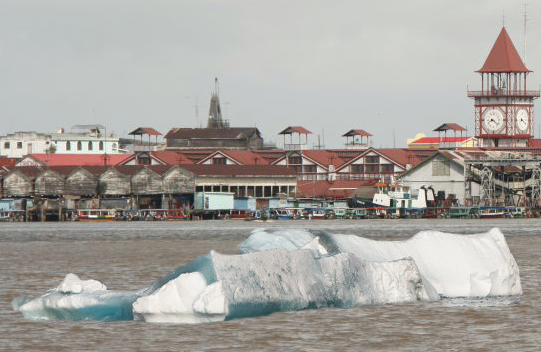 Maritime officials in the South American country of Guyana are seeking assistance from the American National Oceanographic and Atmospheric Association (NOAA) as engineers and policy makers contemplate options to remove several large chunks of Antarctic ice that have become lodged in this South American country’s major rivers.