A RIVER ON FIRE! Gas explodes from Australian river near fracking site. 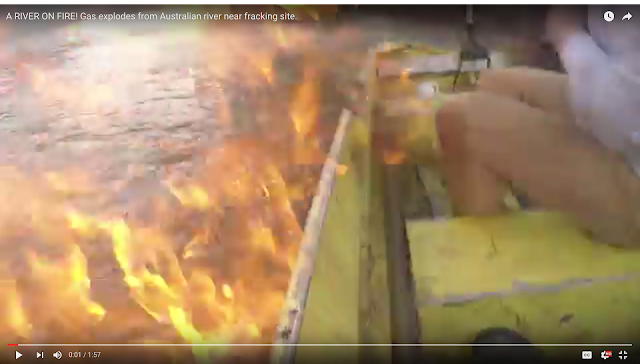 A RIVER ON FIRE! Gas explodes from Australian river near fracking site. I was shocked by force of the explosion when I tested whether gas boiling through the Condamine River, Qld was flammable. So much gas is bubbling through the river that it held a huge flame.

There has been concern that fracking and extraction of coal seam gas could cause gas to migrate through the rock. Not only is it polluting the river and air, but methane is an extremely potent heat trapping gas. Fugitive emissions from the unconventional gas industry could be a major contributor to climate change and make gas as dirty as burning coal.

Gas first started bubbling though the river shortly after the coal seam gas industry took off in the Chinchilla area. Since then the volume of gas bubbling through the river has massively increased and has spread along the river.

You can see stakes in the river bank were the Queensland Government has marked each gas seep. You can also see pipework near the river where Origin Energy has installed for monitoring the gas bubbling through the river.

Thanks to John Jenkyn for taking me up the river in his tinnie. He's a champion!