The New Normal in Europe 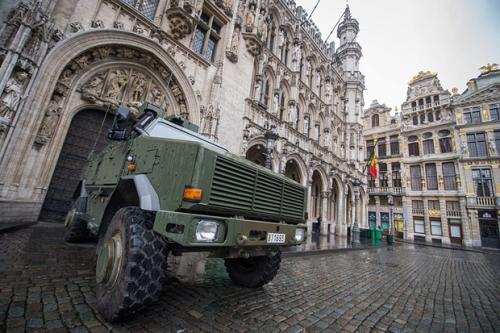 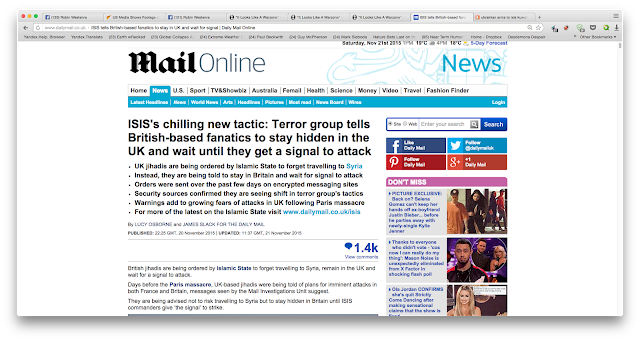 "It Looks Like A Warzone" - Army, APCs, Roadblocks Deployed In Brussels After Explosives, Chemical Weapons Found


In the aftermath of last night's warning of an "imminent" terror threat in Brussels when OCAM Crisis Center and the government raised the country's terror alert to the highest level, today the escalation continues and the Belgian capital looks like not only a ghost town but something out of a Call of Duty warzone after authorities deployed special forces, and APCs, shut the metro, locked down shopping centers, closed sporting events, and warned the public to avoid crowds, train stations, airports and commercial districts because of a "serious and imminent" threat of an attack.

As Reuters reports, a week after the Paris attacks carried out by Islamic State militants, of whom one suspect from Brussels is at large and said by authorities to be highly dangerous, Brussels was placed on the top level "four" in the government's threat scale after a meeting of top ministers, police and security services.

"The advice for the population is to avoid places where a lot of people come together like shopping centers, concerts, events or public transport stations wherever possible," a spokesman for the government's crisis center said.
As AFP reported earlier, the spike in the terror threat is due to a risk of attacks by "weapons and explosives"

The local security forces are taking no chances, and as can be seen on the photos below, APC have been deployed as the city barricades itself with the use of roadblocks at strategic locations. 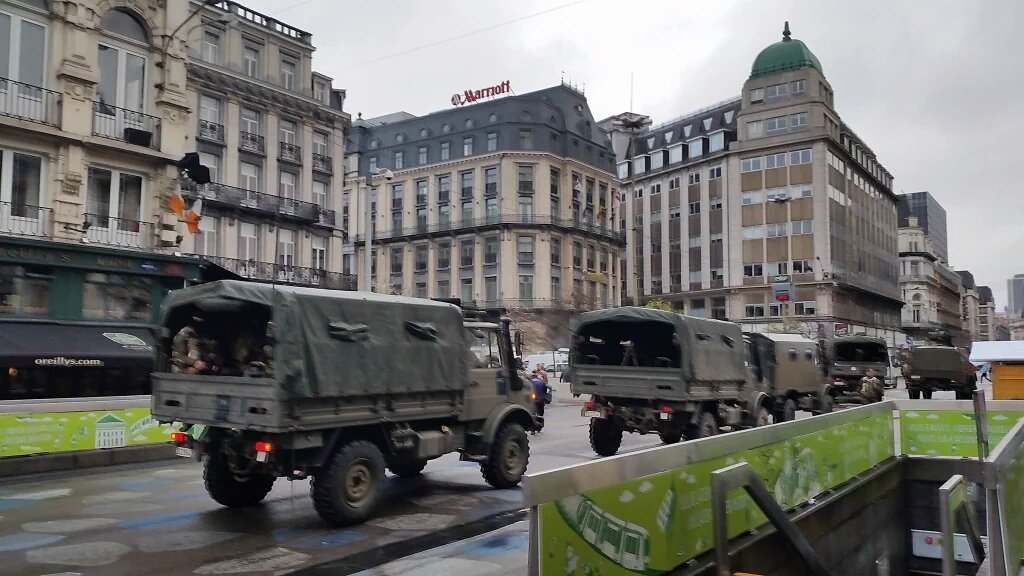 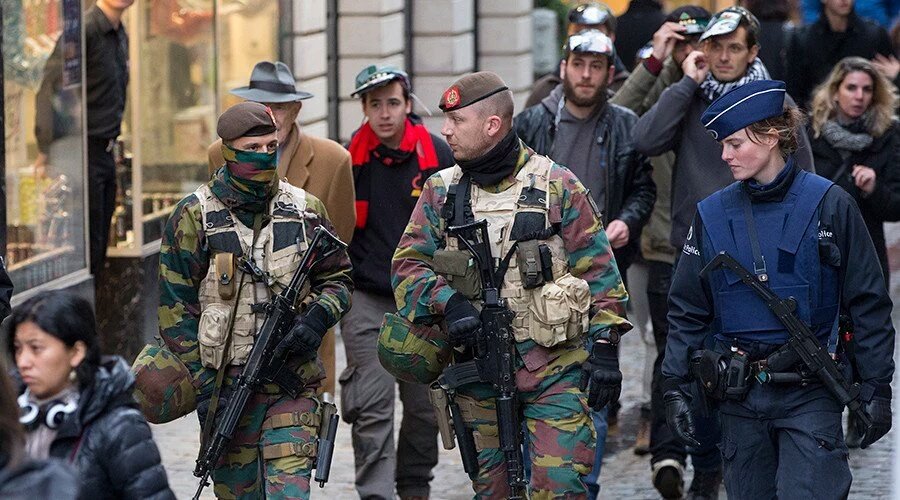 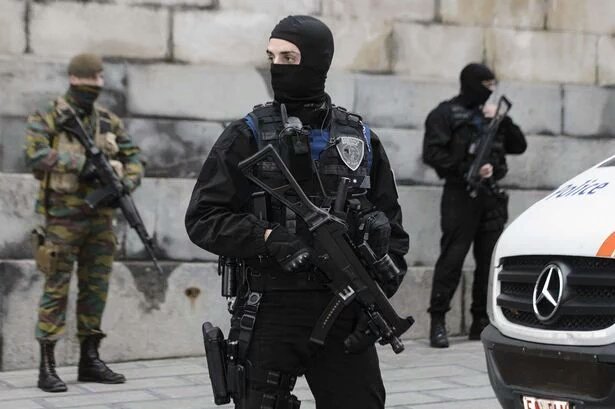 Belgian Prime Minister Charles Michel declined to give the reason why the authorities raised the alert level but told a news conference the government would review the security situation on Sunday afternoon and that the decision to raise the threat level was taken “based on quite precise information about the risk of an attack like the one that happened in Paris where several individuals with arms and explosives launch actions, perhaps even in several places at the same time." The metro system would remain closed until then, in line with the recommendation of the crisis center, he said.

The reason for the dramatic escalation is that chemicals and explosives were among the items found in the during a police raid on Vandepeerboom Street area in the immigrant neighborhood of Molenbeek, a rundown area where Paris attacker Abdelhamid Abaaoud was suspected of operating a terrorist cell.


A search was conducted on Friday at the home of a suspect placed under arrest, federal prosecutors said on Saturday. Some weapons have been discovered, but no explosives or explosive belt.

The suspect was arrested Thursday in the series of searches carried out in Brussels. The person concerned is suspected of involvement in terrorist attacks and participation in activities of a terrorist group.

The find came as Belgium’s capital entered a security lockdown. The government has warned that there could be a repeat of Paris-style attacks in the country’s capital, prompting the closure of subways in Brussels and the deployment of heavily armed police and soldiers.

The heightened security comes as reports claim that biohazard suits have been stolen from a Paris hospital, the Telegraph reports. Eau de Paris, the municipal water company, yesterday told Le Parisien that access to its sites has been limited to only the necessary service personnel, and that they have been accredited by the defence ministry.

Furthermore, we learned today that one more suspect from last Friday's terror attack has been arrested in Brussels which has quickly emerged as the nerve center of last week's Paris attacks.

As Reuters further adds, the crisis center website said it was calling on local authorities to cancel large events, urge people to avoid crowds, postpone soccer matches, close the Brussels metro for the weekend and stepping up the military and police presence. Suspected militant Salah Abdeslam, 26, returned home to Brussels from Paris after the attacks, when his elder brother Brahim blew himself up at a cafe.


Fears of the risk he still poses prompted the cancellation last week of an international friendly soccer match in Brussels against Spain. The crisis center said weekend games in the top two professional divisions should now be postponed.

The alert level for the whole country was raised following the Paris attacks to level three out of four, implying a "possible or probable" threat. Previously, only certain sites, such as the U.S. embassy, were at level three.

Belgium, and its capital in particular, have been at the center of investigations into the Paris attacks - which included suicide bombers targeting a France-Germany soccer match - after the links to Brussels emerged. Three people detained in Brussels are facing terrorism charges.


As a reminder, French authorities have said the attacks were planned in Brussels by a local man, Abdelhamid Abaaoud, 28, who fought for Islamic State in Syria and was killed in the siege of an apartment in the Paris suburb of St. Denis on Wednesday.

Salah Abdeslam, who was from the same Brussels neighborhood of Molenbeek and is said by officials to have known Abaaoud in prison, was pulled over three times by French police but not arrested as he was driven back to Brussels early last Saturday by two of the men now in custody.

As well as Abdeslam's brother, a second man from Molenbeek, Bilal Hadfi, was also among the Paris suicide bombers.

Belgian Interior Minister Jan Jambon told reporters he wanted a register of everyone living in Molenbeek because it was not clear at present who was there, with authorities conducting door-to-door checks of every house. "The local administration should knock on every door and ask who really lives there,"

Jambon said. Curiously when Donald Trump suggests doing something comparable in the US, immediate comparisons with Hitler emerge.
Meanwhile, as the photos below show, soldiers are already on guard in all key parts of Brussels, including at the institutions of the European Union headquartered in the city. Brussels is also home to the headquarters of NATO.

Finally, Belgium's interior ministry has released the following list of recommendations what the local population should do while the terror threat is at its highest level.