A report from Brussels

Thanks to Koen Van Dessel 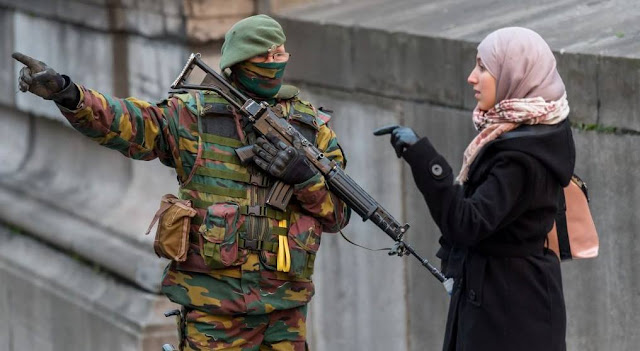 Since the weekend Belgium has been on the highest alert for acts of terrorism. Brussels is in lockdown.

On Saturday the mayor of the city asked cafés and shops to close at 6pm. Police were - and are still - searching for one of the suspects in the Paris attacks of last week, Salah Abdeslam.

In the meantime 16 suspects were arrested, but no trace of this man.

People all over the country are scared shitless, many haven't gone out at all. On Monday, Brussels schools remain closed, as well as children's daycare centers, universities, commercial centers and sports infrastructure...

Both IKEA affiliates in the larger Brussels area aren't opening today either.
Every soccer match planned has been cancelled.

The National Security Council has decided to keep the threat level at its highest (level 4, critical).

Brussels Midi train station has limited access to the platforms.

Electrabel (national power supplier) and Belfius and BNP Paribas Fortis banks have advised their staff to work at home today.

KBC bank has closed some offices and others have intensified security measures. 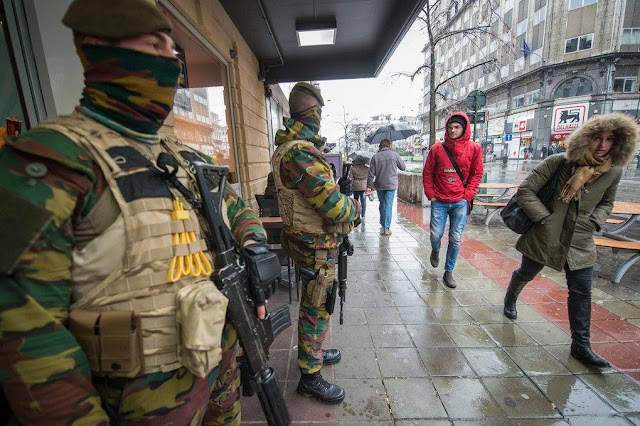 For the first time in 25 years I had to go through customs with passport check at our national Zaventem Airport yesterday coming back.

So it seems we are at war, or at least under siege. The terrorists have already won this way. And what's most appalling is that we're just reaping what we've sown, meaning that decades of destabilizing the entire world as NATO member, things are now pretty much blowing up in our faces, pun intended!

We seem to be going back to the 1930's, soon law enforcement will be stopping random citizens on the street for identity checks and more... 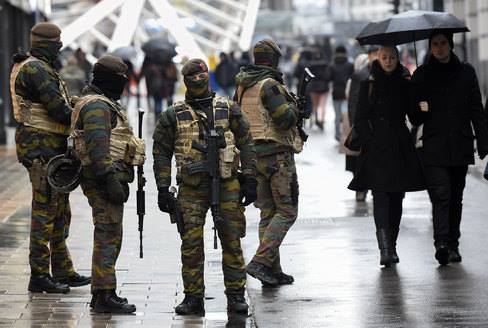 And people are so afraid, it's hard to begin to imagine. Some quotes from the past few days:

"The threat was the biggest in Vijfhoek (a suburb), so we thought it was better to close every pub and restaurant there. But other businesses near squares and crossings have chosen to take precautions, so as not to have another Paris on our hands. Since we are a region of leasure and hospitality, it's a serious setback, but we understand measures like these are a necessity." (Marc Van Muylders, horeca Brussels)

"Now in Belgium finally something is being done, just like what we should be doing in the Netherlands. Finally a right wing government is taking effective measures and is cleaning up the mess the left wing former governments have left us with..." (Bert Dekkers)

"I just want to say that Israel has been dealing with suicide attacks much earlier. Citizens getting blown up in buses, in ice cream parlors, on a terrace. But Europe didn't show any compassion and was even outraged when Israel placed the fence. Well, now Europe is facing the same problem and apparently they're taking Israel seriously when it comes to protecting citizens from muslim terror..." (anonymous)

Oh, how our governments must love what is happening now. Any moment now, european citizens will be begging to be derived from every bit of freedom they ever thought they had...

."..Ooh bruxelles,,ah yes,, everything is unfolding,, or just a big hoax,, the pressure, being put on europe,, to submit ,to israel and america, lets just say the new world order,but i think our country the netherland is playing a role in all this,, fakery,, shell oil,, our royals,, bilderberg,groupe,, and right wing government, lead by our prime minister ass kisser Mark Rutte,,we received a 5 million, tax break, this winter,, and guess what, that prick wont be giving it to the public ,,dus keeping it for so called protection, to our country,, because of so called terrorists,, its will probably go, to the eu , the blood sucking hounds ...."