From the horse's mouth: the war mongers of America 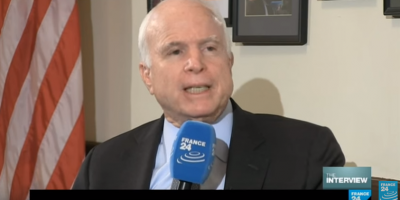 http://russia-insider.com/en/politics/did-john-mccain-actually-literally-choke-his-own-rage/ri11352
Is it just me, or does John McCain - a man that everyone knows is full of hate (especially for Russia) - actually choke on his own rage at two different places in this recent interview he gave to France 24?
Two things really got his goat in the interview: (i) Assad himself, who McCain blames for killing 250,000 people, and (ii) the Russians, who he still hasn't forgiven for Crimea. In fact, he's still utterly enraged over it.
You can tell that he starts to get riled up at the 7:13 mark when he 'ffffffirmly disagrees' with an alliance between Russia and France in Syria. Then, at the 7:26 mark while discussing the evil of Assad, he appears to choke a bit in a moment of pure angst
By the 9:00 mark, it's clear that McCain is trying as hard as he can to contain his fury while discussing a Russian role in the Syrian crisis, but you can tell that his rage over Ukraine is simply uncontrollable, and at the 9:13 mark, he seems to choke on it again.

I don't know, maybe I'm seeing something that isn't there; but with his long track record of anger and hatred, I think he may actually have choked on his own rage

Obama: Syrian "civil war" can not be stopped before Assad go, because majority of Syrians hate him