Obama to support terrorists in Syria and Kiev junta


President Barack Obama has signed the Pentagon funding bill giving $800 million in aid to both “moderate rebels” in Syria and the Kiev regime. Obama also vowed to work around provisions blocking the closure of the Guantanamo Bay detention camp.

Obama signed the National Defense Authorization Act (NDAA) of 2015 on the eve of Thanksgiving, a four-day holiday for most Americans. He previously vetoed the $612 billion bill in a well-publicized ceremony in October, arguing that the lawmakers dodged the spending limits by shifting money into the warfighting slush fund.

Although Congress then trimmed the bill down to $607 billion, the cuts did not affect the $300 million aid to the Ukrainian government, or the “zombie” surveillance blimp program that has cost nearly $3 billion so far. It also left almost $500 million dedicated to arming and training “moderate rebels” in Syria – a program the Pentagon had already abandoned. 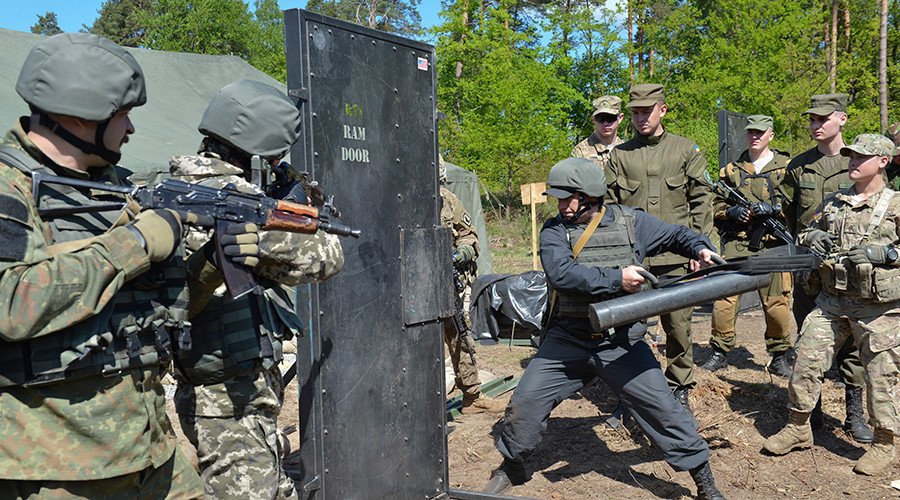 Originally intended to produce a 15,000-strong force by 2016, the program ended up with fewer than 200 fighters, who never even got to fight Islamic State militants. After training in Turkey and entering Syria, the first group of US-trained fighters was ambushed and captured by the Al-Qaeda affiliate Jabhat al-Nusra in August. The second group surrendered to Al-Nusra in September, turning over all their US-supplied weapons and equipment. Only “four or five” US-trained fighters were operating in Syria, Central Command head General Lloyd Austin told shocked lawmakers on September 16.

Obama did not insist on scrapping the program, even though he told ‘60 Minutes’ that he had been “skeptical from the get-go” about its prospects for success.

The NDAA specifically prohibits any US aid going to the “Islamic State of Iraq and Syria (ISIS), the Jabhat Al-Nusra Front, Al-Qaeda, the Khorasan Group, or any other violent extremist organization,” as well as the “Syrian Arab Army or any group or organization supporting President Bashir [sic] Assad.”

Entirely untouched by the cuts was the $300 million in funding for the “military and other security forces of the Government of Ukraine,” as laid out in Section 1250 of the NDAA. The Pentagon will now be authorized to spend the money, in coordination with the Department of State, on providing intelligence, training, equipment, and logistics support to the Kiev regime, including the notorious “volunteer battalions.”

The equipment the Pentagon is now authorized to provide Kiev will include “anti-armor weapon systems, mortars, crew-served weapons and ammunition, grenade launchers and ammunition, and small arms and ammunition.” Counter-artillery radars, drones, and cyber capabilities are also included in the program.

One of the points of contention between Obama and Congress was the provision in the NDAA blocking most of the White House initiatives to close down the camp in Guantanamo Bay, a US military base in Cuba.


Established under former president George W. Bush, the camp has been used for the indefinite detention of suspects in the “War on Terror.”

“Maintaining this site, year after year, is not consistent with our interests as a Nation and undermines our standing in the world,” Obama said in a statement accompanying his signature on the NDAA, adding that he was “deeply disappointed” in Congress for seeking to obstruct the transfer and release of prisoners.

Offering a hint of what the White House might do to circumvent the NDAA in this regard, Obama said that some of the provisions in sections 1031, 1033 and 1034 might “violate constitutional separation of powers principles” and the right of habeas corpus, and that “my Administration will implement them in a manner that avoids the constitutional conflict.”