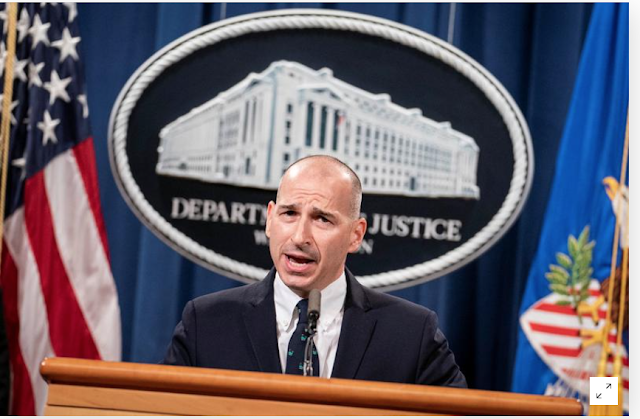 A U.S. Justice Department official on Friday said there is currently no direct evidence of efforts to capture or assassinate lawmakers in the Jan. 6 attack on the U.S. Capitol.

“We don’t have any direct evidence of kill capture teams,” said Michael Sherwin, the U.S. attorney for the District of Columbia, in a press conference with reporters.

The Justice Department is requesting an omission of a claim made in a court filing that says U.S. Capitol rioters intended to kill or capture lawmakers.

A federal prosecutor in Arizona asked a magistrate judge on Friday to strike a line in the initial filing related to Jacob Chansley, the "QAnon Shaman" who became widely known after being spotted in photos donning a fur headdress and red, white, and blue face paint.

The line in question said: "Strong evidence, including Chansley’s own words and actions at the Capitol, supports that the intent of the Capitol rioters was to capture and assassinate elected officials in the United States Government."

Todd Allison, a line prosecutor for the Justice Department in Arizona, said in court that such a position could be argued by the Justice Department if Chansley goes to trial. In the meantime, Allison said, "We do not want to mislead the court by discussing the strength of any specific evidence" related to his intent, according to a report by CNN.

Acting U.S. Attorney Michael Sherwin, the top prosecutor in Washington, D.C., who has been handling the investigation for the Justice Department, said in a Friday press call that "there is no direct evidence at this point in time of kill-capture teams or assassination."

Chansley, along with Lt. Col. Larry Brock, who was dressed in a military-style helmet and vest, have been the center of legal debate over whether there is enough evidence to allege their intentions were to harm elected officials during the siege of the U.S. Capitol on Jan. 6, when lawmakers were counting electoral votes and affirming President-elect Joe Biden's victory. Five people, including a U.S. Capitol Police officer and Trump supporters, died amid the mayhem.

Prosecutors said Chansley left a note on the Senate chamber dais, where Vice President Mike Pence had been presiding, that read "it's only a matter of time, justice is coming."

Chansley called the FBI's Washington field office the next day and confessed his participation but said he didn't mean his note as a threat.

Assistant U.S. Attorney Jay Weimer told a judge on Thursday that Brock's prior experience as a combat veteran made him "all the more dangerous" and argued to keep him behind bars.

Brock was spotted near House Speaker Nancy Pelosi's office, carrying zip-tie-like handcuffs on the Senate floor. He later told the New Yorker he found the restraints on the ground and regretted picking them up. A judge ultimately released Brock to home confinement.

Since the Capitol breach, local and federal officials have beefed up security in and around Washington, D.C., ahead of the inauguration for Biden. President Trump said he will not attend the event on Wednesday.