National Guard Allowed Back to the cold floors of the Capitol

Update (1020ET): National Guardsmen have been allowed back into the Capitol Complex after outrage erupted over their Thursday eviction to nearby parking garages.

According to CNN, one Guardsman said that they are now allowed to rest in the US Capitol Visitor Center.

Meanwhile, Donald Trump has reportedly given permission for troops to stay at Trump Hotel DC if needed.

Senate Majority Leader Chuck Schumer, meanwhile, said that it was "utterly unacceptable" to find that National Guardsmen were "sleeping in parking garages and cramped quarters without proper space or ventilation," adding "I pledge to every national guard member that it will not happen again."

After two weeks of sleepless nights protecting Washington DC from an alleged inauguration threat that never materialized, thousands of National Guardsmen were booted from Congressional grounds on Thursday, where they were forced to sleep on marble floors, and have instead been forced to take their rest breaks in nearby parking garages, according to Politico.

The unexplained move comes after 'dozens' of lawmakers posed for photo ops with the troops.

"Yesterday dozens of senators and congressmen walked down our lines taking photos, shaking our hands and thanking us for our service. Within 24 hours, they had no further use for us and banished us to the corner of a parking garage. We feel incredibly betrayed," said one Guardsman, who said their unit was abruptly kicked out of the Dirksen Senate Office building into a nearby parking garage with no internet reception, one electrical outlet, and a two-stall bathroom for 5,000 troops.

All National Guard troops were told to vacate the Capitol and nearby congressional buildings on Thursday, and to set up mobile command centers outside or in nearby hotels, another Guardsman confirmed. They were told to take their rest breaks during their 12-hour shifts outside and in parking garages, the person said.

Prominent lawmakers from both parties took to Twitter to decry the decision and call for answers after POLITICO first reported the news Thursday night. Sen. Chuck Schumer, the Senate Majority Leader, tweeted: "If this is true, it's outrageous. I will get to the bottom of this." -Politico

In response to the report, several lawmakers have expressed (or feigned) outrage, with several offering the use of their offices to Guardsmen.

This is absolutely unacceptable and despicable treatment of our brave and dedicated National Guard who answered the call to serve.We need to demand answers now and this needs to be fixed immediately. https://t.co/FyNUpFYJyX

According to some Guardsmen who spoke with Politico, there was no clear reason given for the eviction - though one said it that it may have been over a complaint that some troops were not wearing masks, though said that wasn't the case.

"We have strict guidance that masks are to be worn at all times unless soldiers are eating and drinking."

Another Guardsman speculated that "There really may be an important reason for us to vacate and it just hasn’t been well communicated yet."

The troops are particularly concerned about being packed in tight quarters with limited bathroom access during a pandemic. At least 100 Guardsmen have tested positive for Covid, according to two Guardsmen. Some are quarantining in hotels.

A spokesperson previously declined to provide a specific number for troops who have tested positive for Covid. -Politico

According to Guard spokesman Matt Murphy, "As Congress is in session and increased foot traffic and business is being conducted, Capitol Police asked the troops to move their rest area," adding "They were temporarily relocated to the Thurgood Marshall Judicial Center garage with heat and restroom facilities. We remain an agile and flexible force to provide for the safety and security of the Capitol and its surrounding areas." 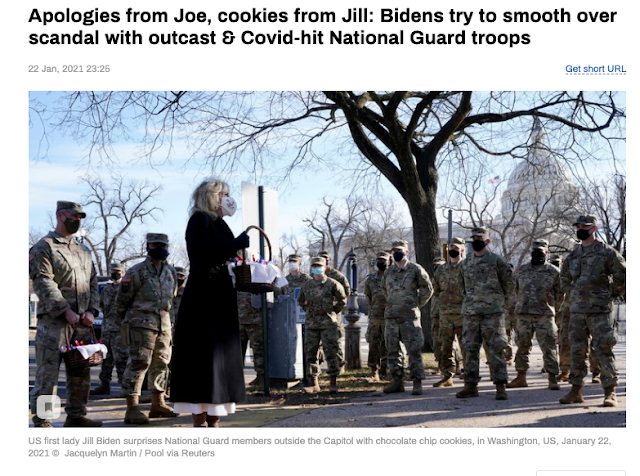 US President Joe Biden has apologized for 5,000 National Guard troops sleeping in a parking garage outside the US Capitol, and the First Lady brought them cookies, amid reports that up to 200 troops may have caught Covid-19.

Biden phoned General Daniel R. Hokanson, head of the National Guard Bureau, on Friday to apologize and ask what he could do, his administration officials told reporters. Meanwhile, First Lady Jill Biden was dispatched to the Capitol grounds to hand out chocolate chip cookies to some Guard members.

There was no mention of either of them addressing a statement by a US official that up to 200 National Guard members have tested positive for the coronavirus during the week-long deployment in Washington, DC.

More than 25,000 troops were deployed to Washington, DC to provide security for Biden’s inauguration, amid claims by Democrats that the January 6 unrest at the Capitol amounted to an “insurrection” against the government by supporters of the outgoing President Donald Trump. The inauguration before the locked-down and empty National Mall went ahead without any security threats.

On Thursday, Politico broke the story that around 5,000 troops ended up spending the night in an unheated parking garage, with only two toilet stalls and no electricity or internet access. It remains unclear who actually gave the order for the Guard to leave the Dirksen Senate office building, as the Capitol Police denied having anything to do with it.

The garage affair has riled up lawmakers on both sides of the aisle. Three Republican governors have already ordered the troops from their states to withdraw from DC.

“They’re soldiers, they’re not Nancy Pelosi's servants,” Governor Ron DeSantis of Florida told Fox News on Friday morning. “This is a half-cocked mission at this point, and I think the appropriate thing is to bring them home.”

His colleagues Greg Abbott of Texas and Chris Sununu of New Hampshire have announced that their National Guard units will be leaving as well. Even Democrats were angered, however.

“This is no way for our heroes to be treated,” New Jersey Governor Phil Murphy said on Friday. “Thankfully, none of our Guard – none of the New Jersey Guard – were left to have to deal with such disrespect.” The NJ troops were apparently placed in various hotels in the DC area.

The Pentagon announced on Friday that about 19,000 Guard troops were packing up and leaving Washington, a process they said would take from 5-10 days and include coronavirus screenings. Politico reported on Friday that some 100 soldiers caught the virus at some point during the deployment, with an unnamed US official saying later in the day that the number might be as high as 200.

Almost 7,000 troops will stay in Washington through the end of January, the New York Times reported, while Senator Chris Murphy (D-Connecticut) told Politico their presence might be needed “for the foreseeable future.” 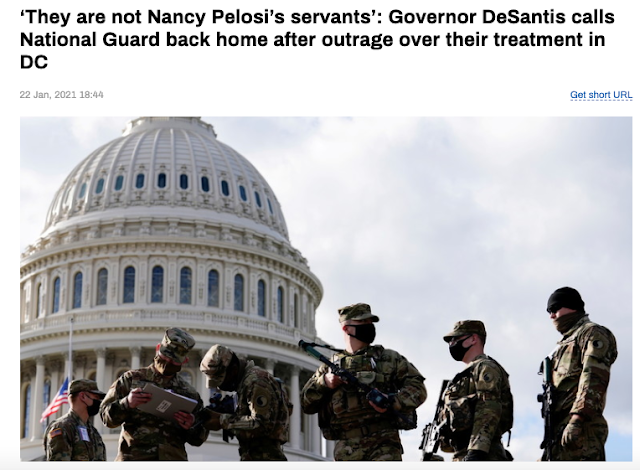 Sleeping In Garages To Be

Patient Until He Can Get Them 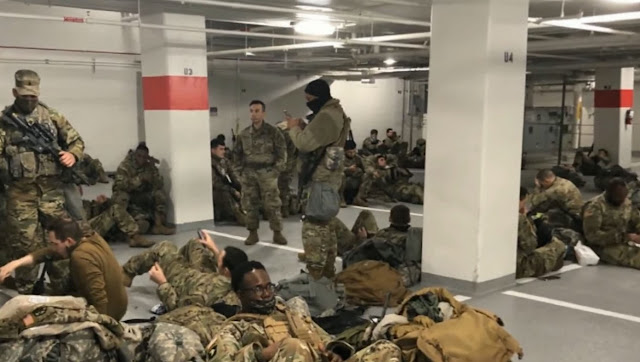 WASHINGTON, D.C.—After national outrage in response to tens of thousands of National Guard troops being sent outside to sleep in freezing parking garages, Biden issued a statement begging the troops to be patient while he writes up the order to send them to much warmer climates in Iraq and Syria.

"Listen, ya bunch of dumb pony soldiers," said Biden to a line of 3,000 soldiers waiting to use the bathroom. "I know you people are much better use to me when you're fighting some war in the Middle East. Hooah! Am I right? Don't worry. We'll get you off to Iraq soon. You won't be cold anymore, folks. It's 115 degrees there!"

According to sources, the guardsmen were sent away from the Capitol Building after some politicians complained that they smelled weird and were holding scary-looking guns.

"We were nervous about all those scary-looking men lying around everywhere," said Senator Cory Booker. "One of them was reading an Ayn Rand book. It was terrifying. Please get these people shipped overseas as soon as possible."

Biden has assured the waiting National Guard and the country that he will "have these boys shooting tribesmen in the hills of Afghanistan in no time."

In the meantime, the troops are dealing with the weather, food shortages, and only one bathroom per 5,000 troops. Fortunately, several more bathroom facilities were discovered on the hoods of Congress members' car