Abbreviated on You Tube 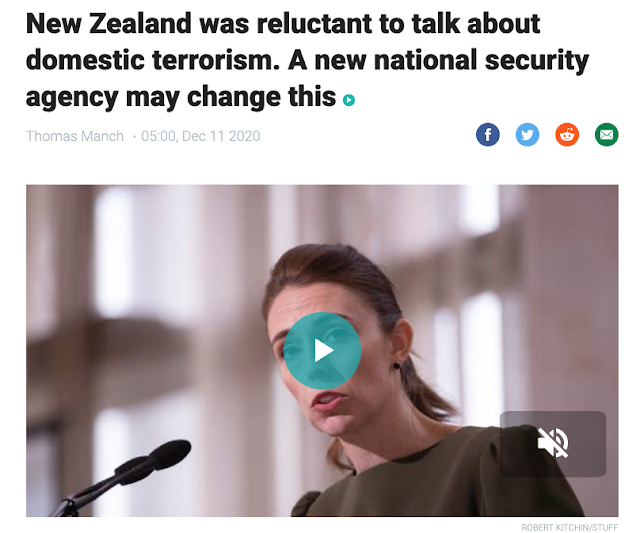 EXPLAINER: Natural hazards such as earthquakes, biosecurity intrusions like the Queensland fruit fly, and pandemics such as Covid-19 are obvious and known threats to New Zealanders.

Domestic terrorism and violent extremism were less understood, before ripping into the public’s consciousness with the terror attack on March 15, 2019.

But who was responsible for this ignorance?

The Royal Commission into the March 15 terror attack, which released its report on Tuesday, said the lack of discussion about counter-terrorism, intelligence, and security came from the top.

“There was no political ownership”, the commission said. Prime ministers and ministers “rarely speak publicly about the terrorism threat or violent extremism”, far less so than in Australia, Norway, or the United Kingdom.

That is now poised to change. The Government has agreed, in principle, with the commission’s recommendation to create a new national security agency, after it revealed confused bureaucratic leadership and a failure to re-evaluate an “inappropriate” focus on Islamic extremism.

How this new national security agency might look is not yet clear.

The royal commission has provided its vision. It wants the agency to create more public discussion about terrorism – publishing “threatscape” reports, encouraging people to report behaviours that might indicate a threat, host annual huis or meetings, to help understand violent extremism.

Who is in charge of national security now?

There is currently no single agency responsible for New Zealand’s national security, a term which covers all risks and threats to the nation’s people, way or life, institutions and communities.

The mostly-hidden bureaucrats who write briefings, and investigators who gather intelligence, are spread across various agencies – meeting in a series of boards and committees which are obscured from the public.

The Security Intelligence Service (SIS), Government Communications Security Bureau (GCSB), and the police are the operational agencies – the SIS and GCSB conduct human and signals intelligence, respectively, and the police deploy detectives for counter-terrorism investigations.

All three agencies fed into the national security apparatus, according to the commission. The Department of Prime Minister and Cabinet (DPMC) had responsibility for coordinating counter-terrorism work, has national security policy units. Within it also sits the National Assessments Bureau (NAB), which writes intelligence reports for the prime minister.

Aside from this board, the Combined Threat Assessment Group (CTAG) – run by the SIS and joined by the GCSB, Defence Force, Police, Civil Aviation Authority, Corrections, and MFAT – assesses terrorism threats specifically, and sets New Zealand’s terror threat level.

The royal commission found that among all these groups there were differing views about who was leading counter-terrorism work, with the chiefs and director-generals of each agency pointing to others as leading the work

What would a new agency do?

A new national security agency, the royal commission said, should combine the counter-terrorism co-ordination role held by the DPMC, and the intelligence assessment work of the NAB and CTAG.

The royal commission considered an “uber” agency combining the SIS, GCSB, and the counter-terrorism functions within police and DPMC, but said “the significant disruption would outweigh the potential benefits”.

The new agency’s chief executive should be the “national adviser” on intelligence and security, should report directly to a minister for counter-terrorism, and should head a new version of the Security and Intelligence Board which was “not working effectively”.

The commission said it should be public-facing, taking a view of an advisory board which includes communities, local governments, and businesses on security issues. A national security strategy and threatscape report should be published each year, and the agency should drive public discussion through annual huis, or meeting, to “increase awareness and knowledge about the threats”.

The commission said the agency should research New Zealand-specific ways to prevent terrorism and violent extremism.

The recommendations, if taken up, would amount to a marked shift in New Zealand’s understanding of terror threats, which have until now been driven by a few public speeches and appearances from the country’s spy chiefs

What does the Government think?

Minister Andrew Little, who has been tasked with responding to the royal commission’s report, said the Government would create a new agency focused on national security strategy.

“It will aggregate resources that [are] already there but dispersed across a number of different sorts of offices, so that we can get a better strategic analysis and strategic direction for our total intelligence capacity,” he said.

The Government will provide a “roadmap” how it will respond to the commission’s recommendations early in 2021. 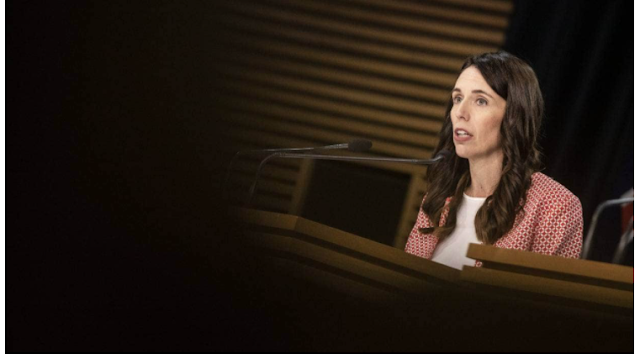 Prime Minister Jacinda Ardern says the Government could green-light a Covid-19 vaccine as soon as next Wednesday, and that New Zealand is keeping pace with Australia’s vaccine rollout.

The first batch of the Pfizer vaccine is due to arrive before the end of March to vaccinate those working at the border, but the country’s medicine regulator, MedSafe, has not yet approved it.

Ardern said Medsafe would seek the advice and recommendation of its ministerial advisory committee on the Pfizer vaccine on February 2.

“The Ministerial expert advisory committee will review Medsafe’s benefit-risk assessment of the pharmaceutical company’s data and, depending on feedback, Medsafe may be able to grant provisional approval as soon as the following day,” Ardern said.

READ MORE:* Covid-19: NZ vaccine timeline remains the same in light of new variant strains* Covid-19: How the vaccine rollout will work* Covid-19 vaccines: Why NZ is waiting for more trials as US, UK rush to immunise

“Medsafe’s process not only ensures New Zealanders can feel confident in the vaccines we receive, it’s also been timely and means we will be ready to receive and administer vaccines as soon as Pfizer is in a position to send them.”

She said even if Medsafe was not yet ready to greenlight the vaccine, she expected the agency would be prior to it actually arriving in New Zealand

The first batch of the Pfizer vaccine is due to arrive before the end of March to vaccinate those working at the border, but the country’s medicine regulator, MedSafe, has not yet approved it.

Ardern said Medsafe would seek the advice and recommendation of its ministerial advisory committee on the Pfizer vaccine on February 2.

“The Ministerial expert advisory committee will review Medsafe’s benefit-risk assessment of the pharmaceutical company’s data and, depending on feedback, Medsafe may be able to grant provisional approval as soon as the following day,” Ardern said.

READ MORE:* Covid-19: NZ vaccine timeline remains the same in light of new variant strains* Covid-19: How the vaccine rollout will work* Covid-19 vaccines: Why NZ is waiting for more trials as US, UK rush to immunise

“Medsafe’s process not only ensures New Zealanders can feel confident in the vaccines we receive, it’s also been timely and means we will be ready to receive and administer vaccines as soon as Pfizer is in a position to send them.”

She said even if Medsafe was not yet ready to greenlight the vaccine, she expected the agency would be prior to it actually arriving in New Zealand.

It is still unclear when in the first quarter of the year the first batch 100,000 doses of the Pfizer vaccine will arrive.

New Zealand has ordered enough of the two-course Pfizer vaccine to cover 750,000 people, with an aim of covering the most exposed to Covid-19 and those most at risk of dying from it. Several other pre-purchasing agreements have been established for vaccines for the wider population.

ARDERN: WE HAVEN’T FALLEN BEHIND AUSTRALIA ON VACCINE

The announcement comes as the Government faces significant political pressure over the vaccine after a woman in Northland developed Covid-19 symptoms after going through managed isolation.

Other countries such as Israel have been rolling out the vaccine with much more speed, although they are also dealing with serious outbreaks.

Ardern argued that New Zealand had not yet fallen behind Australia - where the Government has said vaccinations will start in mid-February – because they had not actually started yet.

But her Covid-19 Minister, Chris Hipkins, has repeatedly said he did not expect the first batch of Pfizer vaccines to arrive until March.

“Australia has not received vaccine yet. New Zealand hasn’t either. There's nothing to suggest that we will be receiving them with great distance,” Ardern said.

She had not shared an exact date as Australia had because she wanted full confidence about when the drugs would arrive, she said.

“We don’t want to give a date that changes – that’s why we continue to speak in broad terms."

Hipkins said once the Pfizer vaccine arrived the 10,000 or so border and MIQ workers would be vaccinated within three weeks.

“Our first focus will be vaccinating our border and managed isolation and quarantine workforce and their close contacts. Once the vaccine arrives in New Zealand, we expect to be able to complete vaccinating this group within two to three weeks,” he said.

“These brave people have been protecting our country from this global pandemic during the past year and protecting them and those who share their households is a priority for us."

It would be the start of New Zealand's "largest ever vaccination campaign" and would take some time to complete.

"The most important thing is when we finish not when we start. However we do intend to get our front line staff vaccinated as soon as possible. Doing so will add another layer to our border defences. We hope to start vaccinating the wider population mid-year.

“If granted, the provisional approval will mean that Medsafe has sufficient information and assurance of both safety and effectiveness for it to allow vaccination to start – though there will be continued monitoring of the vaccine here and overseas.

“However, if Medsafe decides next week that some additional assurances are required before it grants approval, I accept their decision and am satisfied that it’s the right decision on behalf of all of us.”

The Government intended to start wider vaccination of the whole population in the middle part of the year.

North Canterbury GP Richard Clinghan, who spoke out about the importance of vaccines over the weekend, said there would be good community immunity to Covid if New Zealand could attain a 90 to 95 per cent vaccination rate.

The way to get there was to be optimistic and kind, and avoid conspiracy theories and criticising those in the anti-vax camp, he said.

"It needs to become the norm, and that happens by word of mouth.

"The vaccine will defend itself – calling people crazy or stupid will never change their mind."

Clinghan said he could not understand why people were concerned about the speed at which the vaccine was created, saying it was an amazing achievement rather than a concern.

"As a GP I've never had a patient ask me how long it took to develop their drug, in fact when I tell them there is a new one they are usually excited."

Hipkins and Ardern said they were not particularly worried about a German report on the AstraZeneca vaccine – which New Zealand has a pre-purchase agreement for – which said it had a low efficacy for over-65s.

Ardern said that was why New Zealand had purchased a “wide portfolio” of vaccines. AstraZeneca has rejected the German report as incorrect.

Five million doses of the Janssen Pharmaceutica vaccine would be available, if approved. This vaccine would likely be administered through a single dose.

An agreement with Novavax was signed in December to purchase 10.72m doses of its two-dose vaccine – enough for 5.36m people.

Lastly, the AstraZeneca vaccine was also in the line-up of potential remedies for New Zealand. Also a two-dose vaccine, the Government had purchased 7.6m doses for 3.8m people. 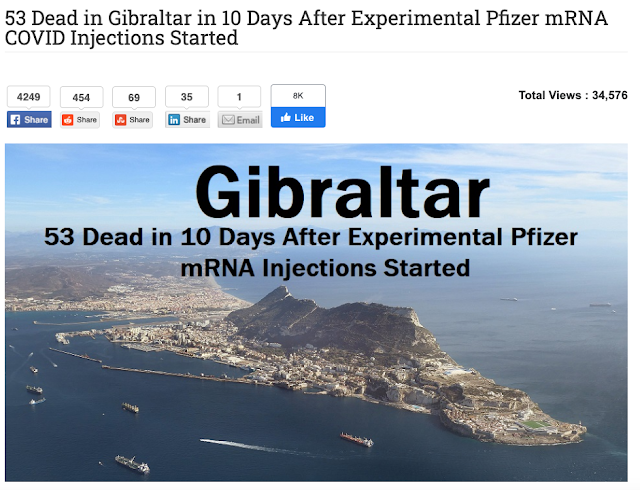 https://healthimpactnews.com/2021/53-dead-in-gibraltar-in-10-days-after-experimental-pfizer-mrna-covid-injections-started/
Posted by seemorerocks at 13:29