DYSTOPIA? - the robots that can be injected into the body

Scientists have created an army of microscopic robots, each smaller than the width of a human hair, that can be injected into the body to wage war on disease.

It resembles the plot of sixties film Fantastic Voyage in which a vehicle was miniaturised and then injected into a patient. Scientists inside the tiny vehicle then destroyed the patient's blood clot using a laser gun.

The new real-world micro-bots could monitor nerve impulses in the heart or brain or even deliver drugs directly into organs, according to scientists from Cornell University who created the machines.

The minute four-legged machines will enter the body via a hypodermic needle and travel through human tissue and blood using four electrochemical actuators that function as 'legs'.

An army of microscopic robots thinner than a human hair have been created that can be injected into the body to wage war on disease, researchers claim +7

An army of microscopic robots thinner than a human hair have been created that can be injected into the body to wage war on disease, researchers claim. 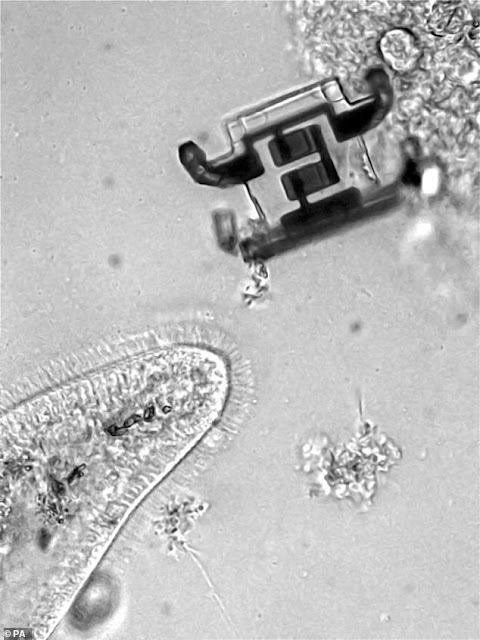 Lead author Dr Marc Miskin, who is now at Pennsylvania University, said: 'Controlling a tiny robot is maybe as close as you can come to shrinking yourself down.'

He said machines like this are going to allow humans to venture into amazing worlds that are 'too small to see' and could change medicine forever.

They are the first robots smaller than 0.004 inches in size in which on-board electronics are used to direct them.

These robots provide a template for building even more complex versions that utilise silicon-based intelligence and can be mass produced.

The walking robots are the latest iteration, and in many ways an evolution of previous nanoscale creations, from microscopic sensors to graphene-based machines.

This is an artist's impression of a microscopic robot with legs around the width of a human hair which are able to bend when hit by a laser light, creating a walk-like motion

Lead author Dr Marc Miskin, who is now at Pennsylvania University, said: 'Controlling a tiny robot is maybe as close as you can come to shrinking yourself down' +7

Lead author Dr Marc Miskin, who is now at Pennsylvania University, said: 'Controlling a tiny robot is maybe as close as you can come to shrinking yourself down'

The legs, 'or actuators', bend when stimulated by laser light - causing a walking motion. In tests over a million were produced - on a 4-inch wafer of silicon.

The micro-bots are powered by solar cells and are made using a technique called photovoltaics - used at a larger scale in solar energy panels.

The legs are wired to several 'photovoltaic' patches on the robots central chassis and when an operator shines a laser on them they 'bend and unbend'.

This can alternate between bending the front and back legs by aiming the light on different patches - propelling the robot.

'They can be injected with a hypodermic needle - offering the potential to explore biological environments.'

Miniaturisation of electronics to produce cell-sized robots is a 'holy grail' of medical research but there has been a lack of smaller enough suitable systems.

The bots get round this problem. They are about 5 microns thick, 40 microns wide and 40 to 70 microns in length. A micron is a millionth of a metre.

Each consists of a simple circuit made from silicon - which essentially functions as the torso and brain. Four electro-chemical actuators function as legs.

The researchers control the robots by flashing laser pulses at different cells - each of which charges up a separate set of legs.

By toggling the laser back and forth between those at the front and back, the robot walks and despite being cutting edge tech, they use a fraction of a volt in power.

They can survive the harshest of conditions, according to the researchers that designed the technology. The limbs of the microbots are also incredibly strong.

As they are manufactured from silicon, sensors will be able to measure temperature and electrical pulses.

Dr Miskin's team at Cornell University in New York is now exploring ways to soup them up with more complicated electronics and onboard computation.

The improvements could lead to swarms of microscopic robots suturing blood vessels - or being dispatched en masse to probe large swaths of the human brain.

Other applications include getting them to fix electronic devices - or crawl through and restructure materials.

Dr Sam Stanton, program manager for the Army Research Office in the US which part-funded the project, said: 'This breakthrough provides exciting scientific opportunity for investigating new questions relevant to the physics of active matter.'

He added: 'It may ultimately lead to futuristic robotic materials.'

Professor Michael Strano, a chemical engineer at MIT, not involved in the study, said: 'The compatibility of these devices with micro-electronics systems suggests a path to the mass manufacture of autonomous micro-robots.'

However, these robots have some limitations, such as being slower than other swimming robots, not being able to sense their environments, and a lack of integrated control.

'Controlling a tiny robot is maybe as close as you can come to shrinking yourself down,' said Miskin.

'I think machines like these are going to take us into all kinds of amazing worlds that are too small to see.'

The findings have been published in the journal Nature.