An Italian doctor speaks out

The Dangers of the COVID Operation. Dr. Roberto Petrella

What do we know?

We know that the tests do not work but governments pretend that they do. We also know that some vaccines sterilize people. Warp Speed vaccine preparation almost guarantees vaccine injury, plus it is an entirely new DNA altering vaccine. Big Pharma is not liable for injuries. Nano-tech is also part of the equation with Immunity Passports etc. — Mark Taliano

Dr Petrella is a retired gynaecologist from Teramo in Italy who has already garnered controversy over his Covid 19 views. Petrella was expelled from the Order of Doctors after retirement for his views surrounding the HPV vaccine which he considers to be ineffective and in some cases dangerous. Petrella upheld his right to his opinion and stated that he is against any kind of mandatory vaccine. Petrella is appealing against the decision. 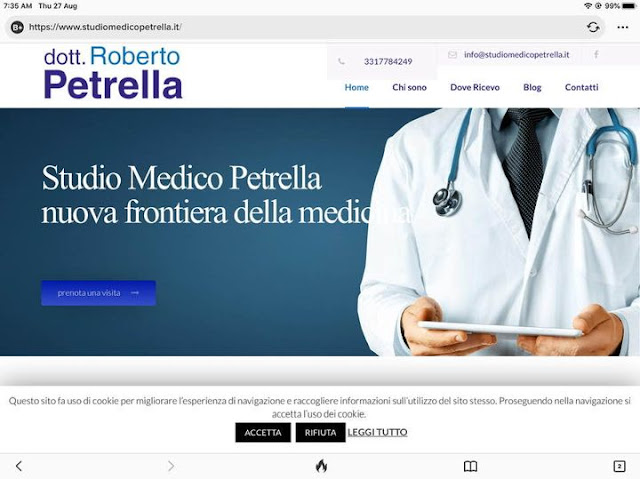 Regarding Covid19, the gynecologist said:

”Doctors and virologists go on television every day to tell shit and lies to create panic. Time to send home all these highly paid gentlemen and consultants who have kept us locked up in jail. We can’t take it anymore”.

Petrella wrote a letter to the Abruzzo region authorities:

“I am ashamed to have been represented, in this health emergency, by doctors on television who said shit and created anxiety. A revolution can come out here,” Petrella continued.

He then also turned to the police who in this period have been the protagonists of several unpleasant episodes:

“With what conscience you make a fine of 500 euros to poor people!”

It does not fail to deal with one of the most discussed issues of this phase.

“The mask, in addition to creating the now known complications, predisposes to cancer.”

But the worst is that you are planning to force the children to put them in school. ‘Dr. Petrella then added:

“There will be war. Did you understand scientists of my feet, virologists of my shoes? Open everything again, nothing happens”.

About two weeks ago the Abruzzese doctor sent a registered letter to the President of the Abruzzo Region Marco Marsilio and for information to the Regional Health Councilor Nicoletta Verì, to the Public Prosecutor’s Office of Teramo, to the Carabinieri Command of Teramo and to the General Director of the ASL of Teramo. The object of the registered letter is the mandatory use of masks for this emergency.

Petrella about the emergency declared:

“You created the panic, there is no emergency. The virus will return in October because you said the vaccine is already ready”.

The doctor is very hesitant on this aspect because it takes years to make a vaccine and making one on a virus that is so changeable is unthinkable: “Colleagues, react, strike.”

The mask is harmful and infringes the rights. In the letter the doctor wrote:

“I do not intend to use the aforementioned mask, at least in open spaces and with sufficient distance from other people”.

Petrella then touched on the legal issue:

“Since the mask is a medical surgical device, it cannot be imposed, under penalty of violation of Article 32 of the Constitution and of the Oviedo Convention signed by Italy”.

“On the basis of the anti-terrorism law and article 85 of the TULPS (Consolidated Law on Public Safety): “It is forbidden to circulate misrepresented, or with an unidentifiable face”.

Then Petrella touched on the topic of the correct use of the masks that should be changed several times a day to have an effective action:

“You do it? If you see an elder afterwards, do you change it immediately? “It limits the physiological act, primary and essential for life, that is, breathing. The lack of a free and healthy breathing is incompatible with an optimal state of health which represents the primary good of each individual, well protected by the Constitution and by the laws 848/55 and by the law 881/77″.

“Why don’t you journalists say anything about these things?” You are accomplices. People are reacting, they can’t take it anymore. He can’t live, he has no money left. They will come to Rome”.

Still taking up the text:

“It is immediately understandable that within the space between the face and the mask an accumulation of hypercapnic stale air is rapidly created and more saturated with microbes, viruses, bacteria and fungi contained within the oral cavity. This increases the possibility of developing pathologies of the lower respiratory tract”.

He also pointed out in the registered letter that there is the possibility of dispersing air through the escape routes between the mask and the face that are created above, below and to the side:

“So what the fuck is it for?” “Prolonged use of the mask over the months involves, for the reasons explained above, an increase in tissue acidosis which, as is now well known, predisposes to the onset of cancer”, Petrella continued.”The imposition of the mask is detrimental to the dignity of the individual, it metaphorically represents a gag, a symbol of slavery”.

Although these are words contained in the letter sent to the President of the Abruzzo Region.

“With the Nuremberg trial, for the first time in history, it is established that no law can be harmful to human dignity. It is, in the hierarchy of laws, superior to any law. You cannot pretend to ignore it”.

Petrella then concluded the reading of the letter:

”If as a result of this communication an oppressive action is taken against me, to force me to use the mask in all situations of parking outside the home, I will take legal action to protect my rights and my health“.

Finally, the Abruzzo doctor invited everyone to send this letter to their regional presidents to make themselves heard and save the future.

Read the report in Italian here.

Note to readers: please click the share buttons above or below. Forward this article to your email lists. Crosspost on your blog site, internet forums. etc.

Mark Taliano is a Research Associate of the Centre for Research on Globalization (CRG) and the author of Voices from Syria, Global Research Publishers, 2017. Visit the author’s website at https://www.marktaliano.net where this article was originally published.

Posted by seemorerocks at 08:29