Is the Trump=Russia nonsense finished? 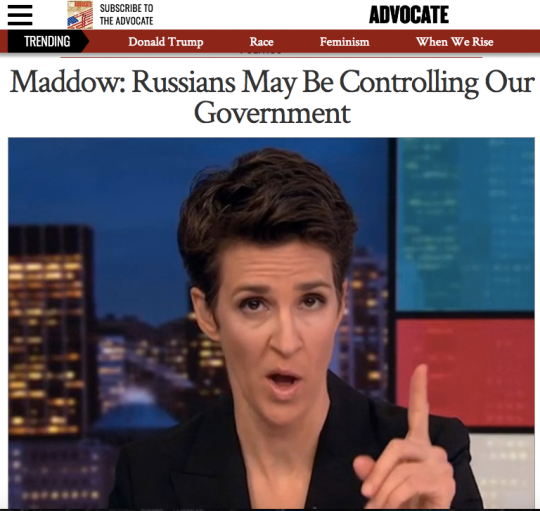 Is sanity finally returning? After weeks of ranting and raving about Russian "interference" and Putin-Trump conspiracies, so-called 'intelligence' agencies and high-ranking Democrats are quietly walking back their rhetoric and managing their base's expectations - simply put: there's no 'there', there.
'Moon of Alabama' reminds us that a while ago Matt Taibbi in Rolling Stone warned: Why the Russia Story Is a Minefield for Democrats and the Media:

If we engage in Times-style gilding of every lily the leakers throw our way, and in doing so build up a fever of expectations for a bombshell reveal, but there turns out to be no conspiracy – Trump will be pre-inoculated against all criticism for the foreseeable future.

And now, as The Intercept's Glenn Greenwald writes, key Democratic officials are now warning their base not to expect...
From MSNBC politics shows to town hall meetings across the country, the overarching issue for the Democratic Party’s base since Trump’s victory has been Russia, often suffocating attention for other issues. This fixation has persisted even though it has no chance to sink the Trump presidency unless it is proven that high levels of the Trump campaign actively colluded with the Kremlin to manipulate the outcome of the U.S. election — a claim for which absolutely no evidence has thus far been presented.
The principal problem for Democrats is that so many media figures and online charlatans are personally benefiting from feeding the base increasingly unhinged, fact-free conspiracies — just as right-wing media polemicists did after both Bill Clinton and Obama were elected — that there are now millions of partisan soldiers absolutely convinced of a Trump/Russia conspiracy for which, at least as of now, there is no evidence. And they are all waiting for the day, which they regard as inevitable and imminent, when this theory will be proven and Trump will be removed.

Key Democratic officials are clearly worried about the expectations that have been purposely stoked and are now trying to tamp them down. Many of them have tried to signal that the beliefs the base has been led to adopt have no basis in reason or evidence.

The latest official to throw cold water on the MSNBC-led circus is President Obama’s former acting CIA chief Michael Morell. What makes him particularly notable in this context is that Morell was one of Clinton’s most vocal CIA surrogates. In August, he not only endorsed Clinton in the pages of the New York Times but also became the first high official to explicitly accuse Trump of disloyalty, claiming, “In the intelligence business, we would say that Mr. Putin had recruited Mr. Trump as an unwitting agent of the Russian Federation.”
But on Wednesday night, Morell appeared at an intelligence community forum to “cast doubt” on “allegations that members of the Trump campaign colluded with Russia.” “On the question of the Trump campaign conspiring with the Russians here, there is smoke, but there is no fire at all,” he said, adding, “There’s no little campfire, there’s no little candle, there’s no spark. And there’s a lot of people looking for it.”
Obama’s former CIA chief also cast serious doubt on the credibility of the infamous, explosive “dossier” originally published by BuzzFeed, saying that its author, Christopher Steele, paid intermediaries to talk to the sources for it. The dossier, he said, “doesn’t take you anywhere, I don’t think.”
Morell’s comments echo the categorical remarks by Obama’s top national security official, James Clapper, who told Meet the Press last week that during the time he was Obama’s DNI, he saw no evidence to support claims of a Trump/Russia conspiracy. “We had no evidence of such collusion,” Clapper stated unequivocally. Unlike Morell, who left his official CIA position in 2013 but remains very integrated into the intelligence community, Clapper was Obama’s DNI until just seven weeks ago, leaving on January 20.
Perhaps most revealing of all are the Democrats on the Senate Intelligence Committee — charged with investigating these matters — who recently told BuzzFeed how petrified they are of what the Democratic base will do if they do not find evidence of collusion, as they now suspect will likely be the case. “There’s a tangible frustration over what one official called ‘wildly inflated’ expectations surrounding the panel’s fledgling investigation,” BuzzFeed’s Ali Watkins wrote.
Moreover, “several committee sources grudgingly say, it feels as though the investigation will be seen as a sham if the Senate doesn’t find a silver bullet connecting Trump and Russian intelligence operatives.” One member told Watkins: “I don’t think the conclusions are going to meet people’s expectations.”
What makes all of this most significant is that officials like Clapper and Morell are trained disinformation agents; Clapper in particular has proven he will lie to advance his interests. Yet even with all the incentive to do so, they are refusing to claim there is evidence of such collusion; in fact, they are expressly urging people to stop thinking it exists. As even the law recognizes, statements that otherwise lack credibility become more believable when they are ones made “against interest.”
Media figures have similarly begun trying to tamp down expectations. Ben Smith, the editor-in-chief of BuzzFeed, which published the Steele dossier, published an article yesterday warning that the Democratic base’s expectation of a smoking gun “is so strong that Twitter and cable news are full of the theories of what my colleague Charlie Warzel calls the Blue Detectives — the left’s new version of Glenn Beck, digital blackboards full of lines and arrows.” Smith added: “It is also a simple fact that while news of Russian actions on Trump’s behalf is clear, hard details of coordination between his aides and Putin’s haven’t emerged.” And Smith’s core warning is this:

Trump’s critics last year were horrified at the rise of “fake news” and the specter of a politics shaped by alternative facts, predominantly on the right. They need to be careful now not to succumb to the same delusional temptations as their political adversaries, and not to sink into a filter bubble which, after all, draws its strength not from conservative or progressive politics but from human nature.

And those of us covering the story and the stew of real information, fantasy, and — now — forgery around it need to continue to report and think clearly about what we know and what we don’t, and to resist the sugar high that comes with telling people exactly what they want to hear.

For so long, Democrats demonized and smeared anyone trying to inject basic reason, rationality, and skepticism into this Trump/Russia discourse by labeling them all Kremlin agents and Putin lovers.Just this week, the Center for American Progress released a report using the language of treason toannounce the existence of a “Fifth Column” in the U.S. that serves Russia (similar to Andrew Sullivan’s notorious 2001 decree that anyone opposing the war on terror composed an anti-American “Fifth Column”), while John McCain listened to Rand Paul express doubts about the wisdom of NATO further expanding to include Montenegro and then promptly announced: “Paul is working for Vladimir Putin.”
But with serious doubts — and fears — now emerging about what the Democratic base has been led to believe by self-interested carnival barkers and partisan hacks, there is a sudden, concerted effort to rein in the excesses of this story. With so many people now doing this, it will be increasingly difficult to smear them all as traitors and Russian loyalists, but it may be far too little, too late, given the pitched hysteria that has been deliberately cultivated around these issues for months. Many Democrats have reached the classic stage of deranged conspiracists where evidence that disproves the theory is viewed as further proof of its existence, and those pointing to it are instantly deemed suspect. 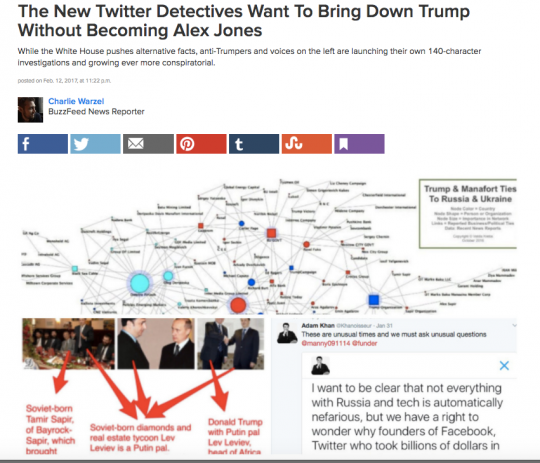 A formal, credible investigation into all these questions, where the evidence is publicly disclosed, is still urgently needed. That’s true primarily so that conspiracies no longer linger and these questions are resolved by facts rather than agenda-driven anonymous leaks from the CIA and cable news hosts required to feed a partisan mob.
It’s certainly possible to envision an indictment of a low-level operative like Carter Page, or the prosecution of someone like Paul Manafort on matters unrelated to hacking, but the silver bullet that Democrats have been led to expect will sink Trump appears further away than ever.
But given the way these Russia conspiracies have drowned out other critical issues being virtually ignored under the Trump presidency, it’s vital that everything be done now to make clear what is based in evidence and what is based in partisan delusions. And most of what the Democratic base has been fed for the last six months by their unhinged stable of media, online, and party leaders has decisively fallen into the latter category, as even their own officials are now desperately trying to warn.
Posted by seemorerocks at 17:37