Emergency services advise residents to ‘bunker down’ ahead of Cyclone Debbie

Severe Tropical Cyclone Debbie is close to 800 km wide and the eye fluctuating at 50-75km wide, with speeds recorded at up to 270+km/h offshore, approx 10km/h short of a Category 5 cyclone.The cyclone is currently moving at approximately 12km/h towards the Queensland coastline and expected to hit Midday QLD time. Hamilton Island is just off the coast of QLD and currently being hit by 180+km/h winds with the storm expected to intensify as it moves closer to the mainland.As the storm is moving slowly, towns are expected to be hit by intense winds for up to 8-10 hours at a time. Not only have shops been cleared of food, but bottle shops (liquor outlets) have been doing a

THE eye wall of Cyclone Debbie is beginning to bear down on North Queensland as locals brace for a “harrowing” time.
Residents on Hamilton Island have reported winds “like freight trains” as the cyclone’s most dangerous zone passes through the popular holiday spot.
Imminent destruction has transformed the usually buzzing streets and beaches of the tourist hotspot into a ghost town as residents and visitors hole up in their houses seeking safety.
News.com.au reporter Emma Reynolds is on the ground at Hamilton where the impact of the cyclone’s “very destructive core” is beginning to be felt.
“It’s been blowing a gale all night, with wind roaring and driving sheets of rain back and forth. Bangs, crockery clinking and the furious sounds of wind kept startling us awake for the few hours we were able to sleep,” she said.
“Hotel staff were dragging some fallen branches inside, with trees down and areas outsie the hotel looking flooded despite us being on slightly higher ground.
“Now we can’t see or hear anyone outside.”
The eye of the storm isn’t due to hit the area until about 1pm Queensland time (2pm AEDT).
“I’ve never heard gusts of wind howl this loud and this intense before,” another tourist on the island said. 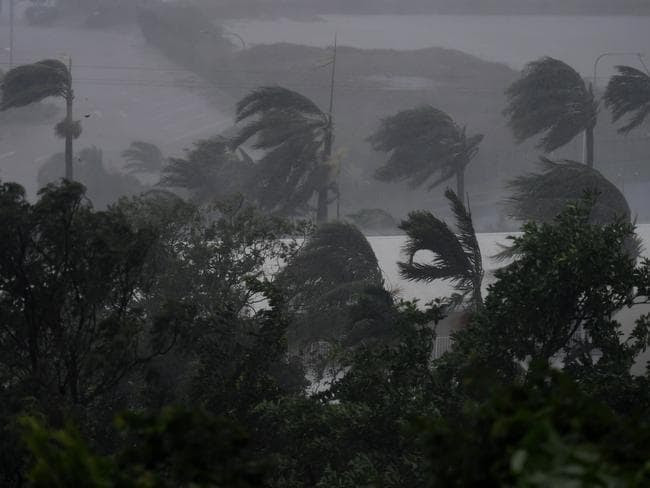 Strong winds and rain lash Airlie Beach. Picture: Dan Peled/AAPSource:AAP
Ads by Kiosked
The Bureau of Meteorology’s latest warning, issued at 7am Queensland time (8am AEDT), warned the cyclone’s “very destructive core” was passing the Whitsunday Islands and the centre of the system was forecast to cross the mainland towards midday. The town of Bowen will face the brunt of the Debbie’s destruction.
When Debbie’s centre hits land the cyclone’s eye is expected to take up to three hours to pass. People will feel the force of the wind for much longer, about 18 hours.
Premier Annastacia Palaszczuk has warned residents and visitors the cyclone, which is only hours from landfall and already affecting parts of the state, will be “absolutely destructive”.
“It’s going to be a really tough time, a really harrowing time for thousands of families in the path of Cyclone Debbie,” she said.

Cyclone Debbie as seen from the International Space Station.Source:Supplied
North Queensland is already in the grip of the Category 4 cyclone’s power as the tropical system threatens to reach Category 5 status bringing with it destructive winds of up to 260km/h.
Queensland’s Whitsunday Islands are being lashed by 190km/h winds as the cyclone bears down on the state’s north coast, preparing to hit land early afternoon. Hamilton Island has reported a gust of 196km/h.
GROUND ZERO: Queensland town to take direct hit
“It’s just like freight trains coming through left and right,” a Hamilton Island resident told ABC. “The trees are going wild. The place is just shaking continuously.”
The slow-moving cyclone is only hours from landfall, but threatens to hang around for up to 18 hours before it passes.
The Bureau warned between 150mm to 500mm of rain could fall today and river flooding with likely follow. A brave or foolhardy local dashes out to take a quick look out to check the area in the main street as Bowen. Picture: Lyndon Mechielsen/The AustralianSource:News Corp Australia
The slow-moving cyclone is only hours from landfall, but threatens to hang around for up to 18 hours before it passes.
The Bureau warned between 150mm to 500mm of rain could fall today and river flooding with likely follow.
Tides are expected to peak at 3.2 metres with the Premier warning of a storm surge of three to four metres above that level, putting low- lying areas at significant risk.
STORM CHASER: Cyclone Debbie is ‘worst case scenario’
Cyclone Debbie was officially upgraded to a Category 4 at 8pm Monday night as Airlie Beach lost power and Hamilton Island copped 178km/h wind gusts.
A striking warning from the Queensland Fire and Emergency Services followed.
QFES issued an alert last night to “bunker down”, as teams would have limited capacity to respond until the cyclone passed.
It said people should prepare now by turning off their electricity, gas and water as well as unplugging all appliances.
“Shelter in the strongest room of your house,” and “keep your emergency kit close by”, emergency services warned.

TOURISTS COP A BATTERING
Tourists on Hamilton Island are weathering the worst of Cyclone Debbie as the Category 4 cyclone passes over the normally idyllic tropical paradise. The eye of the storm has hit the Whitsundays and there are reports of roofs off buildings in some parts.
Helena Mo who is holidaying on the island said the wind started to get “pretty bad” around 1am but the worst came after 4am.
“I have to admit it’s been difficult to get some sleep, even with the knowledge that we are staying in a very secure hotel,” she told AAP. “I have never heard gusts of wind howl this loud and this intense before.”
“You can’t help but worry about what’s going to happen next.”
She said she and her boyfriend moved a mattress into the bathroom around midnight, but so far they had been able to stay in the main part of their room at the Reef View Hotel.
“The doors and windows in this hotel have been pretty sturdy and cyclone proof,” she said. 28/3/17: The main street of Bowen begins to feel the first effects of driving rain and strong winds of tropical cyclone Debbie. Picture: Lyndon Mechielsen/The AustralianSource:News Corp Australia
TOWNS IN ‘COMPLETE LOCKDOWN’
Several areas including Airlie Beach and Bowen, which is expected to be among the hardest hit were in “complete lockdown” on Tuesday morning.
Residents has been warned to take shelter in their homes rather than evacuate as road including the Bruce Highway close as the cyclone moves in.
Emergency services will also be unable to reach the areas.
“The best place to be is in a safe place inside your home,” Ms Palaszczuk said. “Stay indoors for most of today.”
The cyclone was officially upgraded to a Category 4 at 8pm. It’s starting to impact the Whitsunday Islands and is expected to make landfall between Ayre and Midge Point around midday Queensland time (1pm AEDT).
0:00
/
0:00

Cyclone Debbie as seen from space

As of 5.30am, Debbie was about 70km northeast of Hamilton Island.
Mass evacuations are in place as the state braces for what Premier Annastacia Palaszczuk called “a monster of a cyclone”.
Nearly 120 schools and more than 200 childcare centres were closed last night in anticipation of the storm hitting the mainland. Trains to and from Townsville as well as some flights have been cancelled. Daniel McDonald and Tammie Pattel battle the elements at Mackay beach. Picture: Annette DewSource:News Corp Australia
More than 30 specialised energy trucks travelled to north Queensland to help restore power after lights went out at Airlie Beach about 10.30pm.
Elective surgeries have also been cancelled.
While residents and visitors bunker down, some local services have been accused of ripping people off in the face of disaster.
News.com.au has seen now removed offers from a Mackay transport provider charging up to $300 per person for a ride from the affected town to inland Rockhampton.
Hotel guests on Hamilton Island and surrounding tourists spots have complained about being charged up to $400 for a night’s emergency accommodation when they have no choice but to stay on the luxury properties. Bureau of Meteorology Cyclone Debbie’s forecast map, issued at 6am AEST. Picture: Bureau of MeteorologySource:Supplied
‘THE WIND IS FRIGHTENINGLY LOUD’
Despite the imminent danger, North Queenslanders are remaining largely calm and responding to the threat in the most Queensland way possible.
Bowen local Bob Morton, who has lived in the area for 40 years, was spotted by Sunrise reporter Edwina Bartholomew on a barefoot morning stroll on Tuesday.
“We’ve battened everything down ... just preparing and getting everything ready,” he said. “Everybody sticks together and try to help each other out. We want to know where the grog it. We do try and keep sober anyhow.”
News.com.au reporter Emma Reynolds is in blacked-out Airlie Beach, the resort town that is the gateway to the Whitsunday Islands.
She said the “wind is frighteningly loud” at 2am Queensland time.
“We can hear it howling through the trees and frequent banging sounds,” Reynolds reports. Sandbagging in the main street of Airlie Beach in preparation for cyclone Debbie. Picture: Liam Kidston.Source:News Corp Australia
“Everyone is trying to get some rest but the noise and worry makes it difficult, as well as the fact we know we may need to move down to our hotel’s underground carpark at some point.
“The power went out just before 10.30pm so we’ve been using torches and trying to conserve mobile phone battery as we don’t know what’s coming next.
“We could hear people shouting, swearing and whooping distantly outside at about midnight, but it wasn’t clear what was going on.”
View image on Twitter 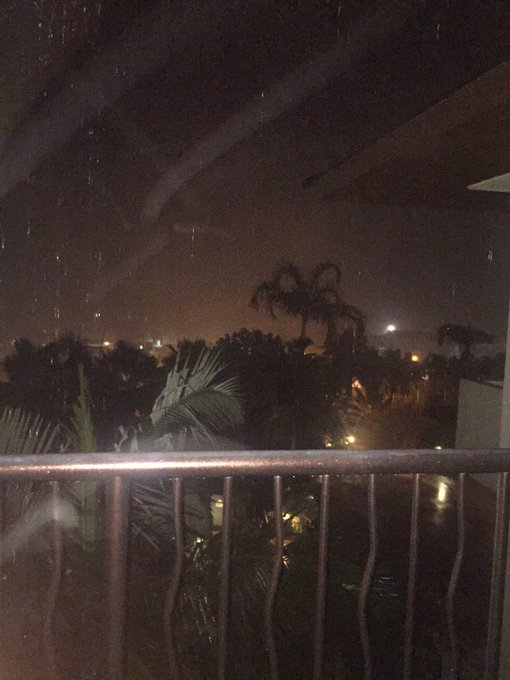 Meanwhile, a woman on Hamilton Island just off the coast tweeted that the sound of the wind and bashing doors was like an intruder.
View image on Twitter 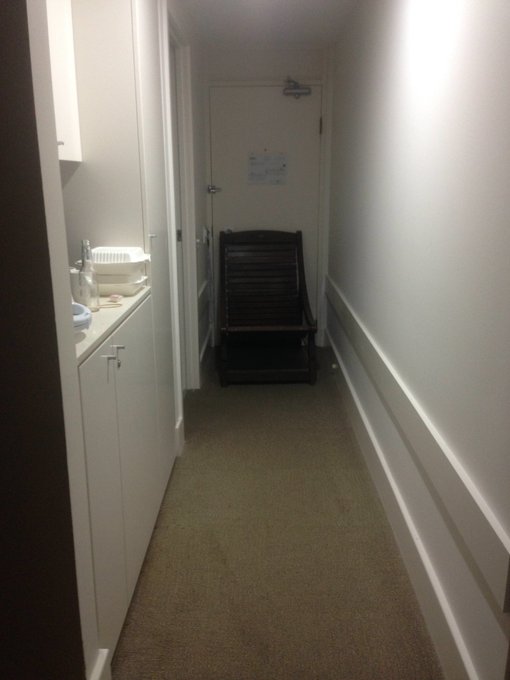 Cakes By Jacob's Mum @cakesjacobsmum
Woke up at the sound of wind howling & doors bashing-like someone trying to get in is terrifying! #CycloneDebbie#TCDebbie #HamiltonIsland

CATEGORY FIVE NOT RULED OUT
The cyclone is designated a Category Four “severe” tropical cyclone with sustained winds up to 250hm/h.
The Bureau of Meteorology has not ruled out the storm intensifying even further as it moves west towards Bowen.
As of 3am, the cyclone was approaching the Whitsunday Islands.
It is forecast to make landfall between Ayr and Midge Point late this morning.
0:00
/
0:00

Emma Reynolds  ✔@emmareyn
Can see a few torchlights out there, heard someone shout 'f***' but then whooping. Unsettling night here in stormy #airliebeach#TCDebbie

Inge Hansen @IngeHansenGU
Camped out in the lounge room with candles now that the power has gone out in Cannonvale, #AirlieBeach. Wind sounds strong..#CycloneDebbie

The Bureau of Meteorology has warned of the cyclone’s “very destructive core”, with wind gusts “potentially to 260km/h near the centre”.
“Destructive winds” with gusts over 125km/h are occurring about the Whitsunday Islands, and will extend further to the exposed coast and islands between Ayr and Mackay later this morning, according to the BOM.
Coastal towns from Lucinda to St Lawrence will be affected, including Townsville, Mackay and the Whitsunday Islands, as well as the inland centres of Charters Towers and Mount Coolon. 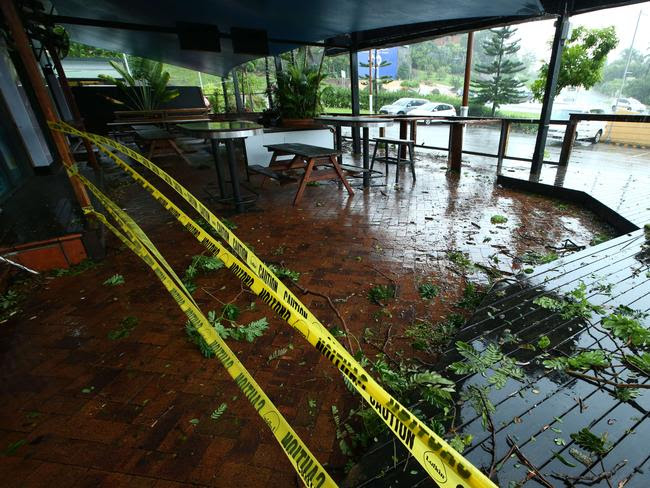 Debris caused by Cyclone Debbie’s strong winds in the streets of Airlie Beach. Picture: Liam Kidston.Source:News Corp Australia
Residents between Ayr and St Lawrence are warned of a dangerous storm tide as the cyclone crosses the coast late this morning.
“The sea is likely to rise steadily up to a level well above the normal tide, with damaging waves and flooding of some low-lying areas close to the shoreline,” the bureau said in a statement.
“Large waves may also develop along the beachfront. 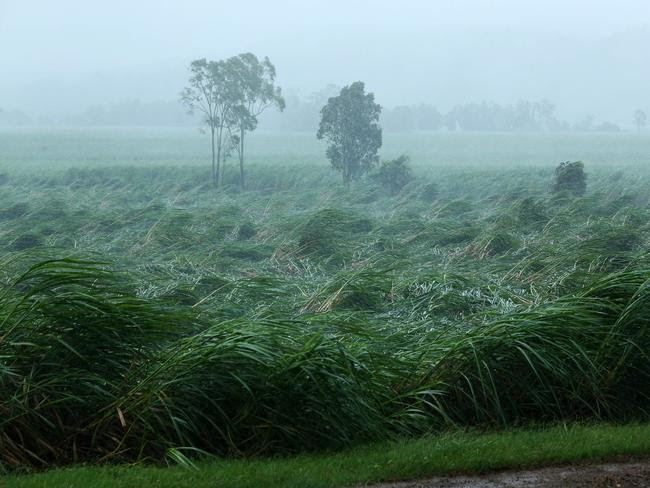 Sugar cane crops in Proserpine are blown over by Cyclone Debbie’s winds. Picture: Liam Kidston.Source:News Corp Australia
“People living in areas likely to be affected by this flooding should take measures to protect their property as much as possible and be prepared to follow instructions regarding evacuation of the area if advised to do so by the authorities.”