More on the Zika virus and the Rockefeller Foundation

Following on from yesterday's report

The Deadly Zika Virus is Available For Sale Online, Courtesy of the Rockefeller Foundation 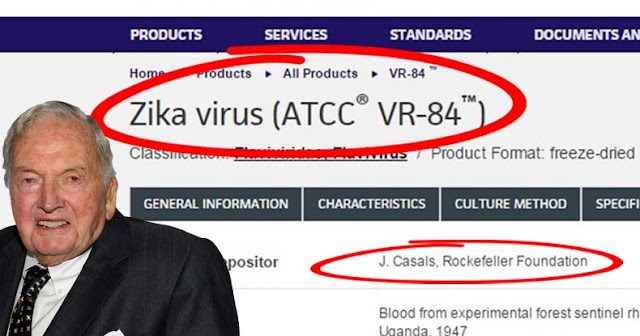 Recent outbreaks of a sickness known as the Zika virus have sparked hysteria across the globe, and many reports have actually indicated that this is likely a man-made disaster, as the origin of Zika itself is somewhat strange.

The virus was “discovered” in 1947, however, it was not discovered in the wild nor did it spontaneously arise. In fact, it was discovered by Rockefeller Foundation scientists in a monkey that they had in captivity, leading many to believe that this was the result of some type of experiment. Since then, cases of Zika have been extremely rare, but in the past few years, outbreaks of Zika have been on the rise, especially in South America and specifically Brazil.

Oddly, the recent outbreak in Brazil coincides with the release of genetically modified mosquitoes in 2012, by the British biotech company Oxitec. Not only did the new outbreak occur just after the release, but it also occurred in the same area.

The Anti Media‏@TheAntiMedia1
Zika Outbreak Epicenter in Same Area Where GM Mosquitoes Were Released in 2015 http://theantimedia.org/zika-outbreak-epicenter-in-same-area-where-gm-mosquitoes-were-released-in-2015/ …

Ironically enough, the GM mosquitos were actually proposed as a solution to infectious disease, but many experts warned that there was not enough research and that a release of such an organism into the wild could have disastrous consequences.

As news of Zika spread this week, rumors also reached the internet that the virus was available for purchase online. Sure enough, there is actually a sale listing for Zika online through a website called atcc.org, where a number of different viruses and biological agents are sold to research teams. For the sake of investigation, the Free Thought Project tried to go through the application process that was required to buy the virus, just to see if anyone with $516 to spend would be able to get their hands on it.
In case there are people out there who think this may be a ‘conspiracy theory,’ you can plainly see that the source for the Zika virus is, in fact, from J. Casals, Rockefeller Foundation, and sourced from Blood from experimental forest sentinel rhesus monkey, Uganda, 1947.

After initially trying to buy the virus, we were prompted to create a user account on the website. After that, we were led through a dozen pages of forms, where we were asked information about our organization, tax ID # and the biosafety level of our lab. While this seems to be tight security, we were able to input false information and fudge the requirements to complete the application process. We are still waiting for our application to be approved, but we did not have to upload any type of proof that we are a legitimate facility.

It seems that while the virus is available online, it is not extremely easy to get, and would likely require some extremely creative fraud in order to make it happen. However, it definitely does seem that it would be possible for a group or individual that is determined enough to make their way through the website’s security measures.

John Vibes is an author and researcher who organizes a number of large events including the Free Your Mind Conference. He also has a publishing company where he offers a censorship free platform for both fiction and non-fiction writers. You can contact him and stay connected to his work at his Facebook page. You can purchase his books, or get your own book published at his websitewww.JohnVibes.com.

UPDATED ! Is The Mass Outbreak Of The Zika Virus Being Used For Population Control? 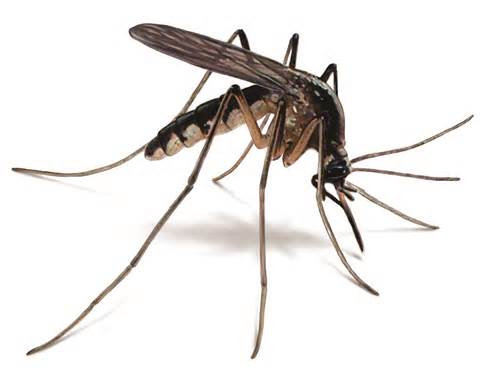 Also in 2015, a new formula of the Tdap vaccine was made mandatory for pregnant women in Brazil to recieve. Seeing as Zika has been a known virus since 1945 and there are no recorded health problems as serious as microcephaly prior to this outbreak, there is reason to suspect that the birth defects are actually being caused by the vaccines. The Bill and Melinda Gates Foundation just so happened to have given the Vanderbilt Vaccine Research Program a $307,000 grant to study the immune responses of these pregnant women in Brazil who received the new Tdap vaccine. The raw results from this study don’t seem to be available to the public.

So, whether it is Zika or the vaccine that is causing these birth defects, the known eugenicist Bill Gates is involved either way. It doesn’t particularly matter how the defects are actually caused when it comes to the population control agenda – the fear is the main objective and fear has certainly been spreading.

There is currently a Zika vaccine being developed and no doubt people will be lining up to be voluntarily poisoned. There is also talk of more GM mosquitos being released to “save us from Zika,” according to the media. Although the media is still missing the connection that the first time GM mosquitos were released it was to stop the spread of dengue then Brazil subsequently got a mass outbreak of Zika.

Guillain-barré syndrome which is being linked to Zika in others a part from pregnant women, is also a major side effect for vaccines. It is a complication mostly associated with the flu vaccine but has also been recorded in some that received the Tdap. At this time there is not much more information in the relevance of this with the current situation in South America.

We will continue to update as we learn more about the outbreak.

There has recently been a mass outbreak of a mosquito born virus called Zika in Central and South America. It is similar to other viruses in the area, chikungunya and dengue fever, but what is particularly dangerous about Zika is its link to microcephaly. It is suspected to be the cause of thousands of babies being born with shrunken heads and brains from the mother contracting the virus when she was pregnant. Thousands of babies have been born with this condition and hundreds have died so far. It’s become so serious that multiple countries in the region have asked the public to refrain from having babies for the next few years.
In 2014 thousands of genetically modified mosquitos were released in Brazil.

Since then Central America has experienced a widespread problem with chikungunya and now Zika. Zika was practically unheard of in this area prior to the genetically modified mosquitos, it is now predicted to infect 3 to 4 million people as it is spreading so quickly. With the Summer Olympics coming up in Brazil, people from all over the world will be flocking to the area and potentially contracting the disease and taking it to their home countries.

There are many methods of population control being done around the world. The Bill Gates Foundation have sterilized thousands of women in Africa without their knowledge via vaccines. In the 1960’s the US goverment pushed a mass sterilization program which left one third of women age 20-49 sterilized. It’s just been admitted that the HPV vaccine that is being pushed on middle school aged children across the US (mandatory by law in some states) causes ovarian failure.

These are just a few of many instances, you could spend all day reading about admitted population control methods. These are not conspiracies, this is known and admitted information.

Looking at what we know – that there are known eugenicists who believe the population needs to be controlled, that it is usually poor countries that are targeted, and that Zika was not a problem prior to the releasing of GM mosquitos (developed by the British biotech company Oxitec, which is funded by the Bill and Melinda Gates Foundation) it raises some real questions about the mass outbreak of this disease. A disease that causes serious birth defects and death of infants, a disease horrible enough that millions of people need to refrain from having children.
Written by Jeffrey phillips
WeAreChange.org
Check out Jeffreys You Tube