I cannot find a reference to this. This came to me through Faeebook

New findings coming out of 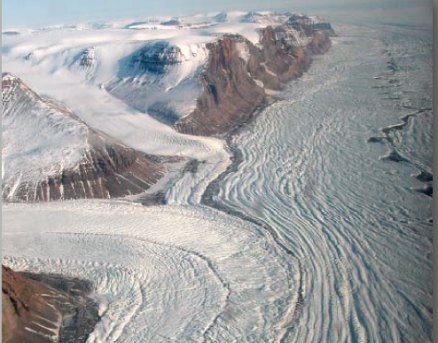 Hot on the heels of last month seeing the lowest January sea ice extent ever recorded in satellite history, Canadian scientists have discovered that the Greenland ice sheet is now pumping vast amounts of water into the oceans at the rate of around 8,000 tonnes every second. 24 hours a day, 365 days a year.

Most of the ice loss, representing a “very rapid change,” is meltwater that can no longer sink back into glaciers and re-freeze. Instead, it stays on the surface of the glaciers, forming large rivers that eventually run off into the sea. This is happening because a thick layer of ice that formed after the extreme 2012 melt season has created an impermeable barrier to new meltwater. This new ice plug means meltwater has nowhere else to go, apart from downhill towards the Arctic Ocean.

As the scientists said, “All the projections we made assumed the water would keep percolating vertically. Now we can say that’s probably not going to happen over large areas of the ice sheet.” This is important because it means that previous climate change models and projections may have underestimated just how much Greenland ice sheet is contributing to sea-level rise today and in the future. Somewhat ominously, one of the scientists added that "every time we have a new result lately it turns out it's melting faster than we thought."

Scientists "baffled"by ABRUPT climate change. Strange how some of us have been expeting something like this. 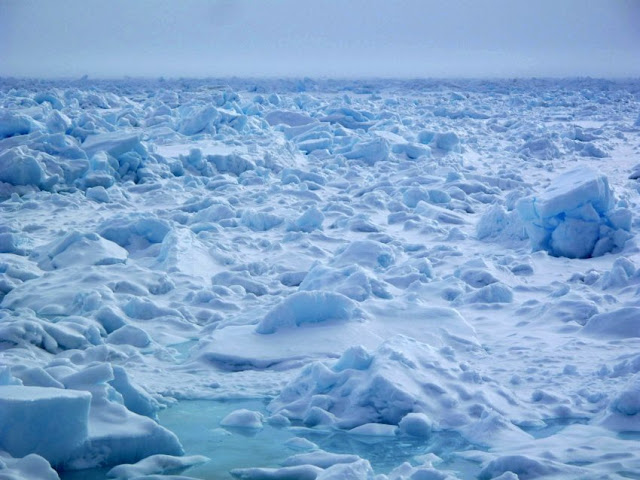 Sea ice floats offshore, north of Barrow. Some climate scientists are optimistic that humans can reduce the amount of carbon dioxide in the atmosphere, allowing Arctic sea ice to rebound.


Normally in the Arctic, the ocean water keeps freezing through the entire winter, creating ice that reaches its maximum extent just before the melt starts in the spring.


Not so this year.


As of Tuesday, sea ice had stopped growing for two weeks. Sea ice extent -- the areas with at least 15 percent ice coverage -- hit a winter maximum of 14.214 million square kilometers (5.488 million square miles) on Feb. 9, and has stalled since, according to daily reports from the National Snow and Ice Data Center in Colorado.


If there is no more growth, the Feb. 9 total extent would be a double record that would mean an unprecedented head start on the annual melt season that runs until fall.


Up to now, the lowest winter ice-extent maximum in the satellite record dating back to 1979 was hit last year, when ice extent reached 14.54 million square kilometers (5.614 million square miles) on Feb. 25, according to NSIDC records. The earliest seasonal winter maximum was reached in 1996, when sea ice hit its peak extent on Feb. 24 of that year, according to the center’s records. Normally, ice extent reaches its maximum in early or mid-March; between 1981 and 2010, the average maximum date was March 12.


Serreze and his colleagues are not prepared to declare that the 2016 maximum has now been reached and those new records set, however.


“I think it’s too early to make any kind of call, although it is certainly a very perplexing winter,” he said.


Extent could bounce up if weather conditions change from what has been a pattern of unusual Arctic warmth, he said. “There’s still a fair bit of winter left in the Arctic,” he said.


But even if ice starts growing again this winter, that would be only thin ice that disappears quickly once the melt season starts, Serreze said. “You don’t have any time left in the season to grow thick ice,” he said.


The extraordinarily low ice for February, which follows a record-low January ice-extent average, has put extent in a “hole” for the start of the 2016 melt season, he said.


“Where will we end up in September? It depends so much on the summer weather pattern,” he said. “But the odds are we’re going to have a very low September.”


The most notable lack of winter ice has been on the Atlantic side, near Norway’s island of Svalbard, according to the center. Ice is also low for this time of year in the Bering Sea and Pacific regions, with direct impacts on Alaska, experts said.


“There isn’t a lot of ice in Cook Inlet. There’s almost nothing in the Bristol Bay region. And that’s remarkable,” said Tony Fischbach, a U.S. Geological Survey wildlife biologist who compiles a daily sea-ice report.


Residents of Northwest Alaska, posting on the Alaska Native Tribal Health Consortium’s Local Environmental Observer network, have provided online evidence of warm conditions and sparse winter sea ice. Michael Sloan of Nome sent photos and a description of a rainy Dec. 30, when water puddled on what he said was an unusually small amount of intact ice near the shore. Millie Hawley, president of the Native Village of Kivalina, made similar observations in another Dec. 30 post, with a photo of slush on the local lagoon.

Posted by seemorerocks at 00:50