2003 was the last normal winter in Wellington

The el-Nino in the South Pacific 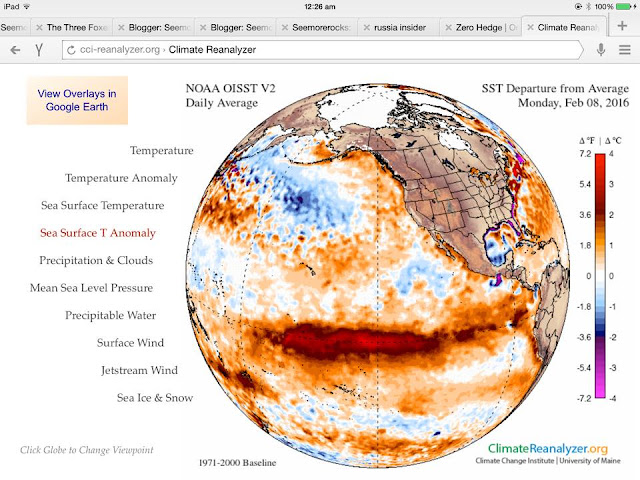 Last night I went to bed early and fell asleep to be woken up,partially by activity in the house but also by sudden wind that came up from the south. Anyone who has been in this country will know that this is where the cooler weather comes from: a southerly usually means either a storm or settled, fine weather.

This was different. The heat was stifling and when I realised that I was awake I got up to see what the temperature was. It was 22C, only 2 degrees cooler at midnight than it was during the day.

These are not the extremes of a heat wave – we’ve experienced hotter. But the difference is that in a place which weather is notoriously changeable and usually windy, this weather pattern has been with us for several weeks on end with scarcely a drop of rain. 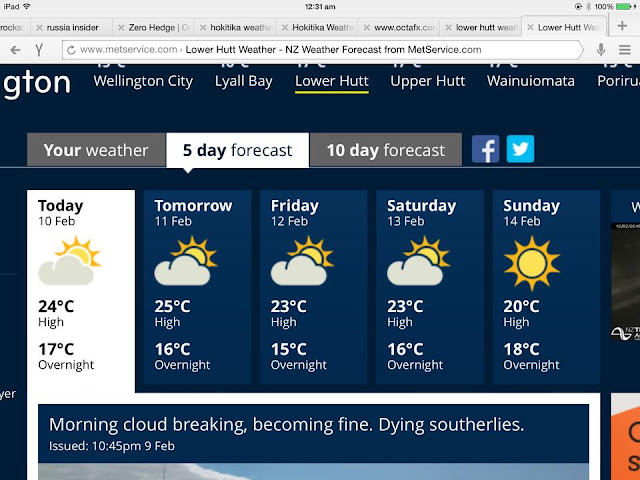 Being by now completely sleepless I decided to check Climate Reanalyzer. The map for the Pacific showed the still-strong el-Nino, but nothing prepared me for the map of sea temperature anomalies around Australia and New Zealand. 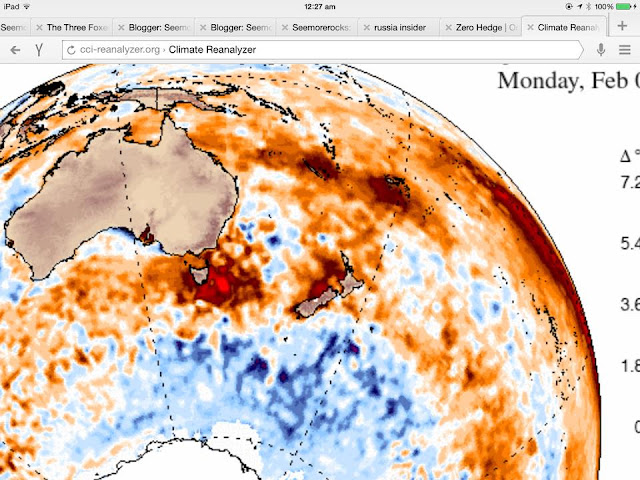 This el-Nino weather pattern became clear to me.

Earlier, in October I wrote an article hoping to chronicle progress of the el-Nino in Wellington

Chronicling progression of el-Nino in New 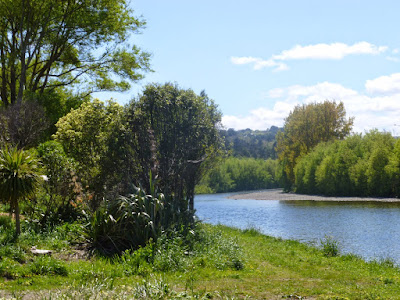 To bring this up-to-date I checked the flow rates for the same place in the river that I had. 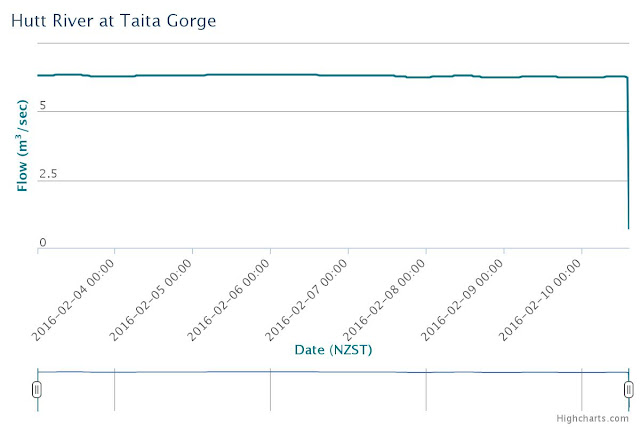 The graphs, however seem to make it impossible to make any meaningful comparison because the scales are different. The Hutt River was so low on Boxing Day it was almost possible to cross without getting wet feet.
The Hutt River was so low on Boxing Day that it was almost possible to skip across from Marsden St to the Lower Hutt city centre without getting wet feet.
Greater Wellington Regional Council environmental hydrological scientist Mike Thompson said no real-time data was collected south of Taita Gorge.
At the Taita gauge, the river was not abnormally low for the time of year and weather conditions.
The apparent low flow at the Lower Hutt city centre stretch of the river was interesting, he said.
"Clearly, it's something we need to keep a bit of an eye on."
The council's flood protection department had not undertaken any recent works in the area which might have affected the shape of the channel, but the channel's bed had been raised by gravel deposits during last year's rainfall events.
It was possible that more water was moving through the gravel, resulting in the appearance of less surface flow when the river was low, Thompson said.
The Greater Wellington website records daily river flow at Birchville.
Last Wednesday's average river flow rate was 6336 litires per second, well above the threshold of 1450 l/s when some level of restriction applies to how much can be taken for water supplies.
Garden watering restrictions

Normal summertime garden watering restrictions are in place in Lower Hutt and the rest of the region [note: slightly different restrictions apply in Upper Hutt].
One unattended sprinkler at each property can be used from 6am to 8am and from 7pm to 9pm at even numbered street addresses on even days of the month, and at odd street numbers on odd days.
A hand-held hose can be used anytime that an unattended system is not, and a watering can may be used anytime.
- Hutt News

Here are a couple of articles worthy of the Soviet Pravda on conditions, locally:

Farmers in Marlborough are making the best of some of the toughest climatic conditions in a long time, Beef and Lamb New Zealand says. 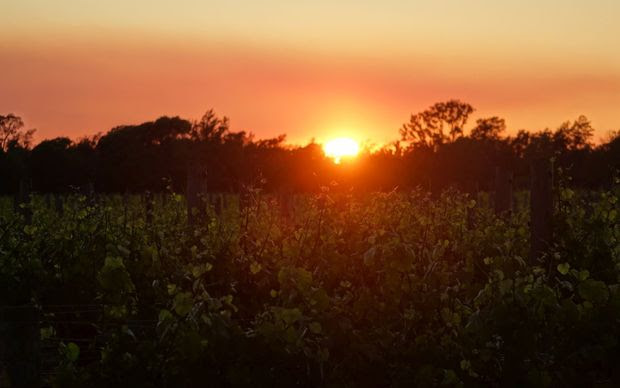 The industry body's northern South Island extension manager, Sarah O'Connell, said recent rain had lifted spirits in the region but had not broken the two-year drought.

The past two seasons were some of the hardest farmers have had, Ms O'Connell said.

"They've had very little moisture over the past 18 months. Although they are used to it they've been faced with a lot more challenges that they wouldn't normally have done - just given that they haven't had any of the autumn and some of the late winter rains that can help them get through the spring.

"But, because they've had a lot of experience dealing with drought over the years, they are also well prepared."

And regionally, for the South Pacific 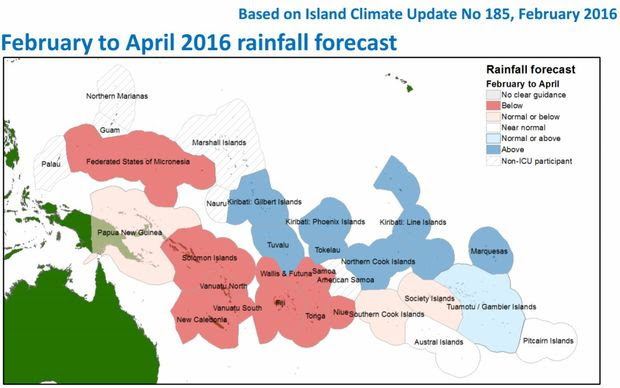 Climate forecasters are predicting below normal rainfall levels for several Pacific Island nations over the next three months on top of an already unusually dry period.

New Zealand's National Institute of Water and Atmospheric Research (NIWA) says New Caledonia and Vanuatu, which have recently experienced well below normal rainfall levels in some areas, will continue to experience below normal levels.

In what might be a slight reprieve for Papua New Guinea, which has borne the brunt of El Niño, the forecast is for normal or below normal rainfall.

The Water Watch update says Solomon Islands will receive below normal rainfall for the next three months.

Niue, the Federated States of Micronesia, and Wallis and Futuna will also get less rain than usual.
..... 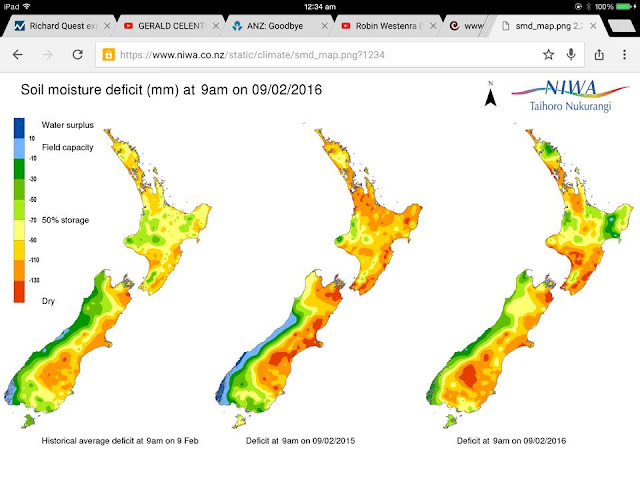 All that has reminded me that I am not a geographer or a meteorologist. I did get it more right through my my observations than the experts who late last year were predicting an el-Nino in the capital with wet and unsettled weather.

They couldn't have been more  wrong on that account!

I'll stick to my anecdote.

I feel somewhat qualified to do that because for the last 12 years I have had a horse who I have visited at least twice a week.

I can remember the last time that Wellington had a frosty winter with lots of fine days. I remember that clearly because Pam and I would get up every Saturday morning to travel out to do a horse trek early in the morning. We both remember the most perfect frosty mornings with much pleasure.

There has not been a winter like it since.

For several years since then the number of frosts could be counted on one's ten digits. Mostly it was a case of wading through the mud to reach my horse.

For at least 4-5 years since I moved Biscuit to his current grazing the winters have produced up to five flooding events each season.

Then, for at least the last three years the pattern changed and the summers produced very dry conditions and,although interlaced with storms and floods the winters have been extraordiarily mild and it has always been my feeling that the land has never quite recovered the requisite soil moisture so that (it seems to me) that the drought effects (never declared as such, except for short periods) have been cumulative.

Last summer the wetlands on the farm completely dried out and the mud became cracked. I have a feeling we are headed for the same again this summer.

Just about everyone you talk to seems to think that whatever the conditions are it is 'normal' or 'one-off' and will be 'better next year'.  So I will continue to depend on my ovservation.

In short, it ain't in any way or form how it used to be when I was younger - I can remember back about 50 years.

And ain't ever going to be normal again. Never.
Posted by seemorerocks at 18:38