'First few hours of N Korea-US conflict would be ugly'

Washington: Prominent North Korean analysts, citing what they see as increasingly troubling signs coming from the dictatorial regime, have voiced concerns that its new young leader, Kim Jong-un, could do something ill-advised and even start a war with the US.

On Friday North Korea renewed what the U.S. has condemned as its 'bellicose rhetoric', saying Kim had ordered the nation's missile forces to prepare to strike the United States and South Korea.

According to the Christian Science Monitor, in response to the prospect of North Korea following through on this and other marginally less dire threats, Defense Secretary Chuck Hagel said that the US military "will unequivocally defend, and [is] unequivocally committed to the alliance with, South Korea."

Some former US Special Operations Forces and longtime Korea defense analysts have their own thoughts on what an 'unequivocal' US military response could look like.

That includes how US troops would be deployed in the event of a lethal first strike on US and allied military forces by North Korea - precisely the sort of move Kim has been threatening to make.

Patrick Cronin, senior director of the Asia-Pacific Security Program at the Center for a New American Security, said that should Kim choose to do "something even more outlandish," the US military and South Korean response would be more dire.

Retired Brig. General Russell Howard, former commander of the 1st Special Forces Group, which has an Asia focus, said that should Kim decide to begin firing them, he says, "in the first few hours of the conflict, it would be pretty ugly."

At the same time, North Korea could begin "swarming" its sizable contingent of 600,000 Special Operations commandos, Howard added, now the director of the Terrorism, Research, and Education Program at the Monterey Institute of International Studies, the report added.


"An.... to strengthen his military credentials and build a sense of unity in the secretive state by highlighting a sense of an outside threats".  Sound like anyone else we know? 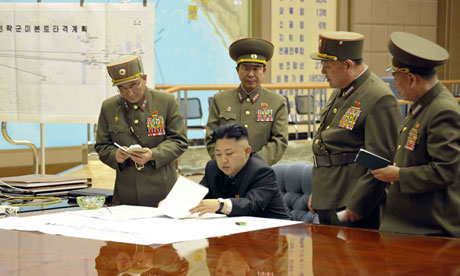 The rising tension between North and South Korea escalated further on Saturday as Pyongyang threatened to shut down a vital factory complex run jointly by the two countries.

North Korea has been engaged in a massive display of sabre-rattling in recent days, declaring that it was in a "state of war" with its far wealthier and more powerful southern neighbour. It has also cut a military hotline between the two countries that was one of the few ways that senior North and South Korean officials could talk to each other, adding to a sharp sense of unease about events on the Korean peninsula.

Now North Korea has explicitly said that it may target the Kaesong industrial park – an important trade zone that is run jointly with South Korean expertise and North Korean labour. Kaesong is a vital source of foreign currency for the North and has been operating normally so far, despite the bellicose warnings dominating headlines in both Koreas.

A spokesman for the North Korean department controlling Kaesong was quoted by the country's state news agency as warning the country would "shut down the zone without mercy" if it felt it was not being taken seriously.

Recent weeks have seen a torrent of bellicose rhetoric from Pyongyang threatening dire consequences for both South Korea and the US. North Korea is angry about the annual South Korea-US military drills, which will run until the end of April, and at the UN sanctions imposed after it carried out another nuclear test in February.

North Korea is also seen as trying to persuade the new government in Seoul, led by President Park Geun-hye, to change its policies toward Pyongyang, and also to win diplomatic talks with the US that could get it more aid. A final factor could be a attempt by the North's young leader, Kim Jong-un, to strengthen his military credentials and build a sense of unity in the secretive state by highlighting a sense of an outside threat.

Though the two Koreas have technically been at war for more than half a century – having never signed a formal peace deal after the Korean war in the 1950s – there is a concern that mis-steps could provoke a real crisis amid the blustering words and dire predictions emerging from Pyongyang.

On Thursday, US military officials revealed that two B-2 stealth bombers dropped dummy munitions on frontlines as part of their drills with South Korean troops. Hours later, Kim ordered his generals to put rockets on standby and threatened to strike US targets if provoked.

But generally North Korea watchers and senior security officials in the White House and the Pentagon have sought to play down the reality of the crisis, portraying it as just the latest in a long series of such incidents. On Saturday National Security Council spokeswoman Caitlin Hayden said the US was in close contact with Seoul over the crisis and took the threats seriously. But she added that North Korea had repeatedly made such threats, including claims it would shut down Kaesong. "North Korea has a long history of bellicose rhetoric and threats and today's announcement follows that familiar pattern," she said.

That was backed up by top White House officials. CBS news reported that a senior member of President Barack Obama's administration had played down any prospect of actual hostilities. "North Korea is in a mindset of war, but North Korea is not going to war," the official told the TV station.

But, despite such attempts at maintaining calm, the US has also strengthened its missile defence capabilities on its west coast. "We continue to take additional measures against the North Korean threat, including our plan to increase the US ground-based interceptors and early warning and tracking radar," Hayden added.

Posted by seemorerocks at 10:07