Scientists Image Deep Magma Beneath Pacific Seafloor Volcano
Since the plate tectonics revolution of the 1960s, scientists have known that new seafloor is created throughout the major ocean basins at linear chains of volcanoes known as mid-ocean ridges. But where exactly does the erupted magma come from? 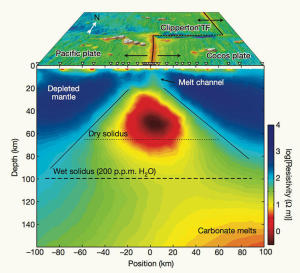 The deep melting region where magma is generated in the mantle beneath the mid-ocean ridge volcano. Green to red colors show regions of partially molten material created by upwelling due to the divergence of the Pacific and Cocos tectonic plates. This image was made by analyzing data collected by an array of seafloor electromagnetic instruments, shown as inverted triangles. Shaded colors in the upper panel show the seafloor topography around the survey region. (Credit: Image courtesy of University of California - San Diego)
Science Daily,
27 March, 2013


Researchers at Scripps Institution of Oceanography at UC San Diego now have a better idea after capturing a unique image of a site deep in the Earth where magma is generated.

Using electromagnetic technology developed and advanced at Scripps, the researchers mapped a large area beneath the seafloor off Central America at the northern East Pacific Rise, a seafloor volcano located on a section of the global mid-ocean ridges that together form the largest and most active chain of volcanoes in the solar system. By comparison, the researchers say the cross-section area of the melting region they mapped would rival the size of San Diego County.

Details of the image and the methods used to capture it are published in the March 28 issue of the journal Nature.

"Our data show that mantle upwelling beneath the mid-ocean ridge creates a deeper and broader melting region than previously thought," said Kerry Key, lead author of the study and an associate research geophysicist at Scripps. "This was the largest project of its kind, enabling us to image the mantle with a level of detail not possible with previous studies."

The northern East Pacific Rise is an area where two of the planet's tectonic plates are spreading apart from each another. Mantle rising between the plates melts to generate the magma that forms fresh seafloor when it erupts or freezes in the crust.
Data for the study was obtained during a 2004 field study conducted aboard the research vessel Roger Revelle, a ship operated by Scripps and owned by the U.S. Navy.

The marine electromagnetic technology behind the study was originally developed in the 1960s by Charles "Chip" Cox, an emeritus professor of oceanography at Scripps, and his student Jean Filloux. In recent years the technology was further advanced by Steven Constable and Key. Since 1995 Scripps researchers have been working with the energy industry to apply this technology to map offshore geology as an aid to exploring for oil and gas reservoirs.

"We have been working on developing our instruments and interpretation software for decades, and it is really exciting to see it all come together to provide insights into the fundamental processes of plate tectonics," said Constable, a coauthor of the paper and a professor in the Cecil H. and Ida M. Green Institute of Geophysics and Planetary Physics at Scripps. "It was really a surprise to discover that melting started so deep in the mantle -- much deeper than was expected."

Key believes the insights that electromagnetics provides will continue to grow as the technology matures and data analysis techniques improve (last week Key and his colleagues announced the use of electromagnetics in discovering a magma lubricant for the planet's tectonic plates).

"Electromagnetics is really coming of age as a tool for imaging the earth," said Key. "Much of what we know about the crust and mantle is a result of using seismic techniques. Now electromagnetic technology is offering promise for further discoveries."

Key also has future plans to apply electromagnetic technology to map subglacial lakes and groundwater in the polar regions.

In addition to Key and Constable, coauthors of the paper include Lijun Liu of the University of Illinois and Anne Pommier of Arizona State University.

The study was supported by the National Science Foundation and the Seafloor Electromagnetic Methods Consortium at Scripps.
Posted by seemorerocks at 15:24