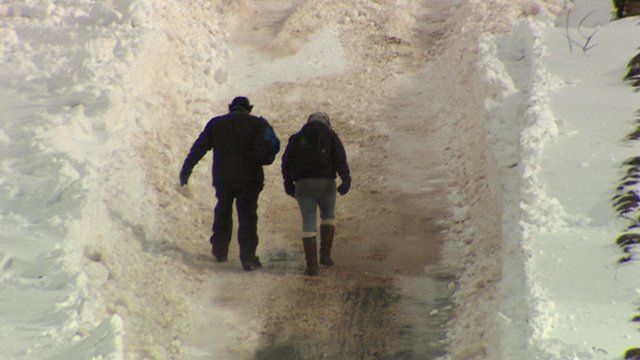 The emergency services, Red Cross, RAF and others are working together to provide basic supplies to people snowed in for days.

The first minister has suggested the executive may look at how to compensate farmers who have lost livestock.

About 50 properties are still without power.

Food boxes containing bread and milk are being airlifted to rural residents.

In a statement on Monday night, Chief Superintendent Chris Noble said: "We are all working hard to get the supplies to those in areas where vehicular access is difficult.

"Some of these people have now been snowed in for four days and it is vital we ensure they have adequate food and medical supplies.

Meanwhile, the Ministry of Defence has been asked if it can use military helicopters to help drop food parcels to animals stranded by the snow.

Many sheep farmers have been unable to get food supplies to their livestock.

Farmer Campbell Tweed, from Cairncastle, near Larne, in County Antrim, said some of his sheep were getting their first feed in four days.

Natasha Sayee reports on the conditions across Northern Ireland as farmers, motorists and engineers struggle with deep snow

"Road conditions are just incredibly bad. There's places where the snow at the side of the road is higher than the vehicles.

"It's coming late in a very, very tough winter - it's just putting the tin hat on us for many of us."

The first minister, Peter Robinson, said his party had asked for the Territorial Army to help clear roads.

Mr Robinson was speaking on a visit to Dromara, County Down, one of the worst affected areas, where sheep farmers have been badly hit.

Speaking after visiting farms in the Glenarm area of County Antrim, she said: "My department is currently sourcing livestock feed for those most affected.

"A main priority is to ensure roads are cleared to help farmers in dealing with the effects of the severe weather, and I have been speaking with Regional Development Minister Danny Kennedy today on how our department's can work closer on this issue.

"I have instructed rivers agency staff to provide support to the roads service to assist in clearing minor roads in affected areas which will assist in getting much needed access to these areas.

"I have also instructed the chief executive of the forest service to deploy their tracked vehicles to help support this work."

Abandoned cars have also been causing disruption on some roads.

NIE said it worked to restore power to more than 137,000 customers over the weekend. Thousands lost their supply due to strong winds and heavy snow.

On Monday evening, about 50 customers were still without power in the Kilcoo and Leitrim and Ballyvoy area of Ballycastle.

BBC Newsline's Mervyn Jess finds extreme conditions on part of the Hannahstown Road outside Belfast and plays 'spot the car'
NIE said any customers still without power should contact them.

About 100 people still had problems with their water supplies at 20:00 GMT on Monday.

Belfast Trust said some operations which were scheduled for Monday had been cancelled as a result of the bad weather.

Most planned surgery went ahead

Spring snow: Thousands of animals feared dead
Farmers fear that thousands of sheep and cattle have died in the snow that has hit in recent days. 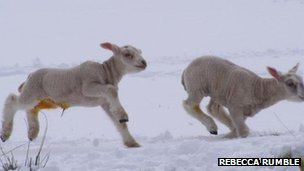 Northern Ireland farmer Catherine Crawford said: "There are hundreds of farmers who have sheep buried."

"We are very, very, anxious," said Carolyn Lamb from NFU Scotland, who added that the full toll would not be known until the snow melted.

The NFU said hundreds of animals were lost in England and Wales, with Cumbria and Shropshire worst hit.

"There are animals going to die here and are dying; we need help out in the rural areas," said Ms Crawford.

The late snow has hit during lambing season, "a key time for farmers", making the situation worse, the NFU said.

Campbell Tweed, a farmer from Cairncastle near Larne in County Antrim, said some of his sheep were getting their first feed in four days.

"Road conditions are just incredibly bad. There's places where the snow at the side of the road is higher than the vehicles. It's coming late in a very, very tough winter - it's just putting the tin hat on it for many of us."

Southern Scotland has been worst affected. "This is really becoming an animal welfare issue," Ms Lamb said, as many animals are stuck, with no way of getting food to them.

There were also fears of "catastrophic losses," with thousands of animals buried, on the Isle of Man. According to the Isle of Man meteorological office, the island's recent snowfall was the heaviest recorded since 1963.

In Scotland, about 3,300 customers in Kintyre, Argyll and the Isle of Arran were waiting to be reconnected to electricity. But all properties in Wigtownshire (Dumfries and Galloway) have now been connected.

In Northern Ireland, only 50 properties in Kilcoo and Leitrim, County Down, and Ballyvoy area of Ballycastle remained without supply.

A Met Office "yellow warning" urging people to be aware of the risk of ice and snow remains in force for Scotland, Northern Ireland, north-east England and the Yorkshire-Humber region.

Although road routes on the south of Arran had opened up, the BBC's Colin Blane, at Blackwaterfoot, said: "It's very difficult to get over to the west side. We came through a road that really was like a canyon, the snow 8-10 feet high and room only for only one vehicle.

Derbyshire County Council has said snow that has hit parts of the county are the worst the area has experienced for 50 years.

In Cumbria, electricity supplies have now been restored to all areas, and many roads have reopened after the weekend's severe weather.

However, road access to the hamlet of Hall Waberthwaite, near Millom, were still blocked by drifts on Monday and one resident said their situation was "dire", with food in the 10 properties starting to run out.