Warming in the Antipodes

Here in Wellington, despite a couple of days of rain last week, things are getting drier and drier. Late March should have a distinct feeling of autumn – instead, we have had dry winds and it has felt uncannily warm.

Meanwhile, winter will not release its grip in the Northern Hemisphere

Dangers from heatwaves set to rise
Victorians will face greater danger from heatwaves because of climate change and inadequate planning, a new report says.

On the back of Australia's hottest summer on record, and with heatwaves predicted to become more frequent, the state must upgrade its preparation and emergency responses, says the Victorian Council of Social Service (VCOSS) report.

The council's Feeling the Heat report says the 2009 Victorian heatwave, linked to an estimated 374 deaths, showed the devastation that extreme heat can have and the strain it places on health and emergency services.

"Heatwaves cause more deaths in Victoria each year than other natural disasters such as bushfires and floods - yet despite the risk, heatwaves are not included in the state's emergency management plans," Acting VCOSS CEO Carolyn Atkins says in the report.

Risk factors for people in a heatwave include age, environment, medical and socio-economic conditions.

State department of health figures indicate Melbourne will see double the number of days with the temperature above 35C over in coming decades.

People over 65 are generally less efficient at regulating their body temperature, while poorer residents are more likely to live in low-quality housing with less shade and cooling available, the report says.

While the state government announced new heatwave policies following the 2008/09 summer, little has been done, the report says.

The report recommends putting heatwaves on the same emergency planning level as bushfires and floods by linking the Statewide Heatwave Plan to emergency management planning.

It also calls for legislated standards to improve the thermal efficiency at homes of vulnerable residents, including the disabled and chronically ill.

Funding should also be boosted to better the quality, thermal efficiency and cooling of low-cost housing, it says.

Summer in the city carries on into autumn in once-in-a-decade event
Sydney is on target for its hottest week since January and hottest March week in a decade, with an average maximum temperature of about 29 degrees. 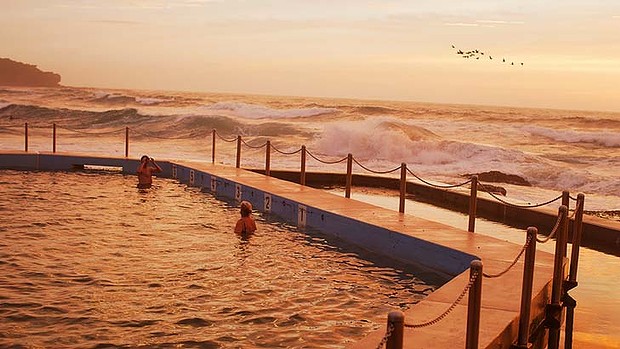 The city has already begun its unusually warm week.

On Friday, the mercury rose to 31.8, 6 degrees above the long-term monthly average and the first 30-degree day since January.

Between now and Thursday, maximum temperatures will range from about 27 degrees to about 30, helped along by plenty of sunshine and northerly winds almost every day.

For March to have this much warmth for this long is about a once-in-a-decade event.

If the forecasts are correct, it will be the hottest March week since 2002, when the average maximum was 29.6.

It will come as no surprise that March overall is almost certain to end up being hotter than February, something that has happened only 17 times in the past 100 years.

Quieter-than-normal monsoonal activity in the tropics has allowed the interior to be sunnier than normal and for heat to build. This heat has combined with a slow-moving weather pattern where a blocking high near New Zealand has been deflecting strong fronts south of NSW, keeping Sydney in warm northerly winds on most days.

For those who prefer more typical autumn weather, a fairly strong front will arrive late on Thursday, bringing a cooler southerly change and some rain. That should move north on Good Friday. 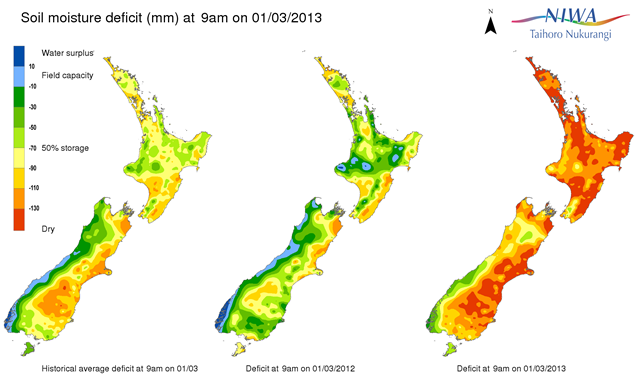 4 March 2013 (NIWA) – February rainfall totalled less than 15 mm (and also less than 15 percent of February normal) in parts of Northland, Auckland, and the Bay of Plenty. It was the driest February on record for Leigh (north Auckland), and Milford Sound. In the case of Leigh, it was also the driest month (of any month) in records which began in 1966.

The dryness was widespread. Rainfall was less than 25 percent, or a quarter, of February normal around Taupo, in parts of Gisborne and Hawkes Bay, and along the West Coast of the South Island. Less than half (50 percent) of normal February rainfall was generally observed across the remainder of the country. The exceptions were between Wanganui and Wellington, in Central Otago and the Lakes District (with near normal rainfall); and Marlborough and the Kaikoura coast (with rainfall between 50 and 80 percent of February normal).


Meanwhile, in the Northern hemisphere....

The winter that won’t end: massive snow storm blankets much of U.S 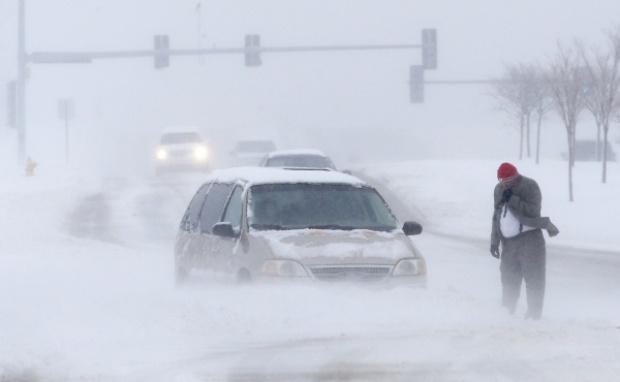 
Winter-weary residents of southwestern Pennsylvania braced for yet another round of snow and ice -- seriously, Mother Nature, again? -- Sunday as a massive storm system swept in from the Midwest, dampening hopes that springlike weather might finally be near.

By Sunday night, the storm covered much of the eastern half of the country, from Iowa to the eastern seaboard and as far north and south as Michigan and Tennessee. Along its path across the upper Rockies and Midwest, the storm left as much as a foot of snow over the weekend, with wind gusts creating drifts of 2 to 3 feet in some states.

Just 3 to 5 inches of snow was expected to accumulate across much of southwestern Pennsylvania overnight, with another 1 to 2 falling this morning, according to the National Weather Service in Moon.

Crews spent Sunday evening pretreating roads with brine and mounting plows back onto trucks. By midnight, when the heaviest accumulation was expected to begin as the main body of the storm moved in from the southwest, the highway department planned to have 70 to 80 trucks out across Allegheny County, Mr. Struzzi said.

Heavy snow was expected to continue through the pre-dawn hours, then lessen as the day progresses. The winter storm warning issued by the National Weather Service expires at 11 a.m. Today.

"The snowfall is going to be lighter, plus with the late March sun coming through the clouds and warming the ground, not much will accumulate after morning even if the snow lingers into the evening," said Brad Rehak, a meteorologist at the National Weather Service office in Moon.

Over the weekend, however, residents across much of the Midwest saw heavy snowfall and damaging winds that made the season seem like springtime in name only.

The storm dumped 7 to 9 inches of snow from eastern Kansas into central Missouri before tapering off there Sunday morning, said Dan Hawblitzel, a meteorologist with the National Weather Service in suburban Kansas City. In the mid-Missouri town of Columbia, TV station KOMU was briefly evacuated Sunday morning because of high winds and a heavy buildup of snow on the broadcast tower next to the building.

Snow began to fall in earnest in St. Louis and western Illinois on Sunday morning. Parts of St. Louis saw nearly 9 inches, while a record snowfall of 9.6 inches was set at Columbia Regional Airport, breaking the old record of 6.1 inches set in 1912.

The storm arrived in Indiana late Sunday afternoon and left 5.5 inches in Hancock County, east of Indianapolis, according to the weather service. Ohio was expected to see 5 to 9 inches Sunday night.

Before it exits off the coast of New Jersey on Monday night, the storm could leave 1 to 3 inches in southern New York and New Jersey.

"It's rare, but not impossible," he said.