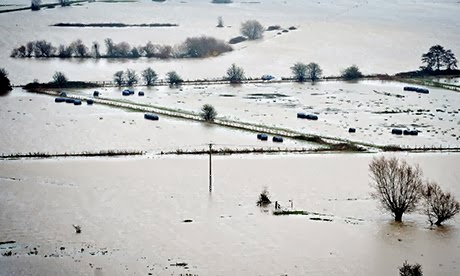 Flood-stricken residents on the Somerset Levels have claimed they are enduring developing-world conditions as the government said it would work with local authorities and agencies to tackle the problem, but gave no firm promise of extra money.

The Conservative environment secretary, Owen Paterson, was heckled during a visit to a pumping station by residents who were angry that he did not stop to speak to them and sceptical that significant changes would be made.

"It's all still in the lap of the gods," said Bryony Sadler, a hairdresser and member of the newly created Flooding on the Levels Action Group (Flag). She dismissed Paterson's visit to the banks of the swollen river Parrett as a publicity stunt. "It was a waste of taxpayers' money. He hasn't told us what's going on. We have lived like a third-world country for three weeks. Nobody is really listening to us."

Paterson visited Somerset following pressure in the House of Commons from local Tory and Liberal Democrat MPs last week and the eye-catching declaration of a "major incident" by one of the local authorities, Sedgemoor.

There had been high hopes that an announcement of extra cash for the area or a firm plan to dredge rivers – which many believe will cure the problem of prolonged flooding – would be made.

Instead Paterson said local authorities, the Environment Agency and other bodies had been given six weeks to come up with a new scheme to tackle flooding.

He said this would "almost certainly" involve clearing the Parrett and Tone rivers and suggested a new sluice to keep seawater out of the river systems could be built.

He said other bodies such as environmental charities had a role to play in working out how water can be held back further up in the hills. He said planting schemes could help slow the progress of water and work was needed to improve sustainable drainage systems in nearby towns. "All that together is a long-term, serious plan which I hope will give us satisfactory results here over the next 20 years," he said.

But the prospect of help years hence does not impress people suffering now. Farmer James Hall said 90% of his land was under water. "You begin to wonder if it is worth it," he said. "Farming is all about handing the business down to future generations. But I'm not sure there is going to be anything to hand down."

Gemma Richards called for Paterson to resign. Her grandfather Walter's home is flooded for the second time in as many years, forcing him to take refuge with his family. She said: "It is appalling. He has only just got things back together after his home was flooded last year. He had to move all his furniture by himself at 85."

Sue Crocker said she was having to share a portable toilet with neighbours after septic tanks failed. "We feel abandoned. We're human beings and this is the 21st century and we're not feeling like we're part of it any more."

The leader of Tory-controlled Somerset county council, John Osman, was disappointed that no additional funding had been announced. "We will continue to keep the pressure on to secure a fair deal for Somerset's residents," he said. Ian Liddell-Grainger, MP for Bridgwater and a fierce critic of the Environment Agency, said he was pleased Paterson had set a timetable. "Now we can bypass the Environment Agency and deal directly with the government," he said. 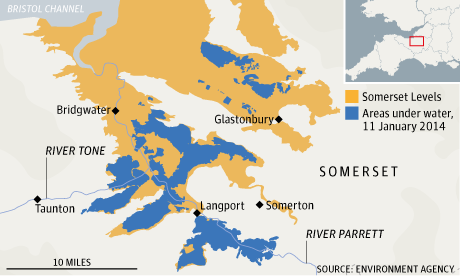 The agency blamed the flooding on an "extraordinary combination of weather conditions" and said: "We're doing everything we can to pump water off the Somerset Levels as quickly as river and tide levels allow. This is the single largest pumping operation ever undertaken in Somerset."

It added: "Dredging is often not the best long-term or economic solution and increased dredging of rivers on the Somerset Levels would not have prevented the recent widespread flooding."

Paterson, widely regarded as a climate change sceptic, was also facing questions after it emerged money spent on preparing the UK for the impacts of global warming had almost halved since he took office.