Would Israel Dare to Sink U.S. Battleship and Blame Iran?

I have found their commentary pretty good.

How do they decide who gets the scoop? NBC News belongs to Comcast. 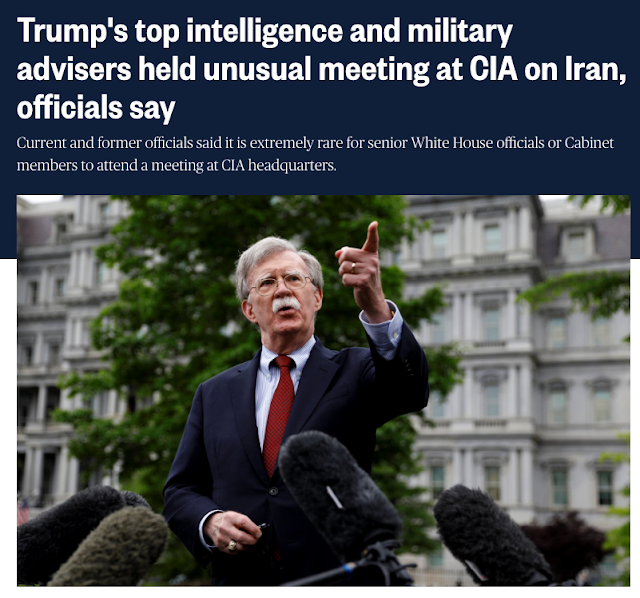 National security meetings are typically held in the White House Situation Room. The six current officials, as well as multiple former officials, said it is extremely rare for senior White House officials or Cabinet members to attend a meeting at CIA headquarters.

The officials said the discussion was not about the intelligence that led to the decision in the following days to send a carrier strike group and bomber task force to the Middle East, but did not describe what the meeting covered.

Five former CIA operations officers and military officials said that in the past, such meetings have been held at CIA headquarters to brief top officials on highly sensitive covert actions, either the results of existing operations or options for new ones.

The U.S. has a very specific intelligence gathering capability on Iran that is only able to be reviewed at CIA headquarters, two former officials said.

Another possible reason to hold a meeting of senior White House officials at Langley is if there is disagreement about what the intelligence shows on a particular subject, said John McLaughlin, a former acting CIA director. Then-Vice President Dick Cheney frequently traveled to CIA to grill analysts about intelligence, McLaughlin said. Critics later accused Cheney of seeking to cherry-pick intelligence suggesting that Iraq had weapons of mass destruction, a charge he denies. The CIA and other agencies wrongly assessed that Iraq had WMD.

A spokesperson for the National Security Council declined to comment on the April 29 meeting.

The meeting came amid rising tensions between the U.S. and Iran, as the Trump administration piles pressure on Tehran's economy through crippling sanctions. Days after it took place, Bolton, citing indications of an increased threat from Iran, announced the deployment of a U.S. aircraft carrier strike group and a bomber squadron to the Persian Gulf. He warned Tehran that "any attack on United States interests or on those of our allies will be met with unrelenting force."


Asked on Thursday about Iran, President Donald Trump said: "They're in bad shape right now. I look forward to the day where we can actually help them. We're not looking to hurt Iran. I want them to be strong and great and have a great economy."

"But they should call, and if they do, we're open to talk to them."

Mark Dubowitz of the Foundation for Defense of Democracies, a think tank that takes a hard line on Iran, suggested in a Wall Street Journal op-ed on April 2 that the administration could "build a wall of additional sanctions" to encourage Iran to halt its support for militants, its work on missiles and its human right abuses.

The administration announced new additional sanctions on Wednesday. The International Monetary Fund said last month that inflation in Iran could hit 37 percent this year, and issued a forecast that the country's economy will contract by 6 percent.

Democratic lawmakers have accused the White House of stoking tensions with Iran to lay the groundwork for war.

"I'm deeply worried that the Trump administration is leading us toward an unnecessary war with Iran," Sen. Tim Kaine of Virginia, a member of the Senate Armed Services Committee, said on Tuesday."Trump's Iran strategy is blind escalation," said Sen. Chris Murphy of Connecticut, who sits on the Senate Foreign Relations Committee. "There is no endgame. No overriding strategy. No way out. It's just escalation for the sake of escalation."

Yet even some critics of the administration's hard-line Iran policy said there was good reason for the acceleration last week of moving military assets in the Persian Gulf.

"There is legitimate intelligence that the Iranians are preparing to launch attacks in the region," one former official said.

The Trump administration has said its goal is to produce "systemic change" in Iran's behavior and denied accusations it is seeking "regime change." Bolton has long advocated for regime change in Iran.

The CIA has a seasoned intelligence officer, Mike D'Andrea, running its Iran operations. D'Andrea oversaw U.S. drone strikes that targeted al Qaeda militants and the effort to hunt down bin Laden.
https://www.nbcnews.com/politics/national-security/top-trump-admin-intel-military-advisers-held-meeting-cia-iran-n1003736
Posted by seemorerocks at 10:38