Climate change is spoken of in hushed tones, but it wasn't always this way
Farming communities still differ widely in their opinions on the environment, despite clear awareness some years ago 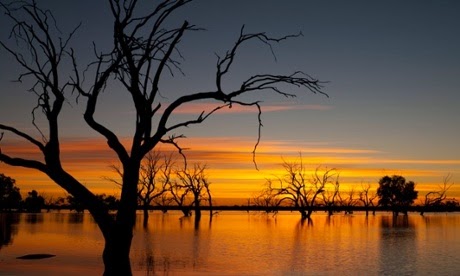 There is a term that is not generally used in polite company in the bush. That term is climate change.

To an outsider’s eyes, it might seem to be counterintuitive. Here are people whose living is mostly dependent on the vagaries of the weather. Yet you will hear more conversation about climate change at a city dinner party than a lazy Sunday afternoon lunch in the bush.

The publicly reported attitudes to climate change in rural Australia have been just as confusing.

Malcolm Turnbull notwithstanding, climate change has been inextricably linked with one side of politics – Labor – through the emissions trading scheme. Tony Abbott successfully managed to tie climate change to Labor and drag it down by campaigning against the carbon tax. Hence, in conservative country Australia, there is a reticence to discuss the topic. But don’t be fooled. There is still a lot happening away from the public gaze.

“NFF believes that climate change may be the greatest threat confronting Australian farmers and their productive capacity … now and in the future,” Crombie said at the time. “Today’s announcement, and our keenness to engage, reflects this reality. It threatens Australia’s agricultural productive base – an important contributor to the national economy, the ability for Australian farmers to put food on the table of Australian families, and the long-term sustainability of at least 60% of Australia’s landmass.”

That was a while ago. As in metropolitan Australia, the climate change issue has dropped down the priority list in the country.

By 2009, the public mood had changed and the NFF was welcoming the contribution of Ian Plimer, lending support to other voices in the debate.

Crombie said: “We’ve heard ad nauseam from those scientists convinced that climate change will ruin us all and, seemingly, hellbent on making grim doomsday predictions. But we’ve heard precious little from those experts for whom the jury is still out, or, in the case of Professor Plimer say their research shows extreme climate change predictions are overstated.

“Now, before I’m carted to a stake for public torching, I’m not saying Professor Plimer is right, nor that his colleagues with differing views are wrong. Just that it’s about time we had a balanced, informed discussion and debate ... free from vilification of those who dare to question conventional wisdom.”

Among the farming community there is a range of views from accepting climate change science to entrenched opposition. In most cases, though, the community tends to prefer the term “climate variability” than “climate change”.

Corey Blacksell is a grain farmer on the South Australian side of the Victorian border who grabs modern farming practice and technologies with relish. An active member of the Liberal party, he holds a masters in agribusiness and also trades grain. He believes arguing over what is happening to the climate and why it’s happening is pointless for farmers. A bit like arguing why the baby is crying. You just have to deal with the consequences.

“Most farmers would accept the climate is changing but would rather not argue over why. We just have to do everything to ensure we make the right decisions for our businesses,” he said. “Farmers are now managers of capital and we must ensure we have mitigated the risks until the odds are in our favour. If we can’t, and that means in some years you don’t even sow a crop and go on holidays instead, then we should consider that.”

When I suggest one of the reasons for farmers openly debating the causes of climate change may be to bring about changes in farming practices, Blacksell disagrees.

“If it is the case [that human activity is causing it], then it’s so much bigger than agriculture and it has to be debated at a much higher level. Farmers have adapted over time, history tells us this,” he said. “Climate change is a gradual change, it’s not X today and Y tomorrow. Agriculture can manage any change [or variability] in climate because of this. ”

Closer to home, farmer Peter Holding is one of my neighbours in southern New South Wales. He is a participant in the Climate Champions program, which gives farmers the latest research from climate scientists and provides scientists with farmers’ experiences. It is funded by the Grains Research and Development Corporation, Meat & Livestock Australia and Australian Wool Innovation.

The program is unequivocal in its information booklet on the scientific basis of climate change. The first line: “The scientific evidence is clear: our climate is changing and humans are mostly to blame.”

Holding is one of the few I have heard actively use the term “climate change” as a serious threat to food supply. He is also involved in Landcare and the Rural Fire Service.

He says while farmers deal with climate conditions every day, the larger issue of why the climate changes is overwhelming for people running complex businesses.

“They don’t need any more stress in their lives. They don’t know the answer so they just do what they can do,” Holding says. “I see people are very, very stressed. They are like timid dogs. Belt a dog around enough and it will sit down and go quiet. Twenty or 30 years ago, farmers would fight and protest. Now they have just gone quiet.”

Holding believes climate change has real implications for drought policy. If the climate is getting hotter, drought policy, which is currently getting an overhaul for a government white paper, will have to change.

“I cannot for the life of me understand how you can expect governments to provide drought assistance if you don’t accept there is an ongoing climate change,” he says.

And that is what worries me about the muted public participation by agriculture in the climate change discussion. If the farmers who have a vast knowledge and an economic interest in climate policy don’t take part in the public debate, they will kiss goodbye to the chance to influence policy for their industry.

But Blacksell begs to differ, saying farmers are such a small part of the population, their voice on many policy issues is drowned out.

“We only have to look at the live export ban,” he says. “As such I question whether agriculture can have any great influence in policy debate until the supply and demand equation for food becomes a lot tighter.

“That’s how agriculture will alter the declining terms of trade it’s suffering from. While food is plentiful, interests groups can have an influence in how their food is produced. Nothing speaks louder than a hungry stomach.”