Aborted Fetal Tissue In Vaccines: Babies Are Born ALIVE At 5-6 Months Old With Beating Hearts And No Anesthesia

Follow-Up On a Shocking

This is a very important interview between Robert F. Kennedy, Jr. and Dr. Theresa Deisher regarding the use of human fetal tissue to culture viruses for vaccines, because Dr. Deisher reveals that human DNA fragments are found in vaccines.

Most of the COVID vaccines being developed are using human fetal tissue to culture the coronavirus.

One of the more interesting questions Mr. Kennedy asked Dr. Deisher was why the manufacturers of vaccines switched from exclusively using animal tissue to culture viruses for vaccines, to start using aborted fetal tissue some years back.

Dr. Deisher’s reply was that the industry we getting a lot of pressure from the animal rights movement to stop using animals for experimentation.

Mr. Kennedy was shocked, and stated:

It’s kind of weird to think that the animal rights activists have more clout with the vaccine companies than do the anti-abortion activists.

They do. And you know what’s really alarming is the lack of outcry over human babies born alive at five to six months old so that their hearts can be obtained beating. And they have to be beating to be used in the research that’s being done.

If the heart has stopped beating, it’s not useful. You cannot use it.

And so these babies are delivered alive, and their hearts cut out without anesthesia.

I wouldn’t do that to a mouse….

On June 15th, Robert F. Kennedy, Jr. interviewed the founder and president of Sound Choice Pharmaceutical Institute, Dr. Theresa Deisher, on the use of aborted fetal tissue in vaccines.

Mr. Kennedy and Dr. Deisher covered a wide range of topics including which vaccines contain human fetal tissue, what the existing research tells us in terms of health risks, and what alternatives might be used in place of human DNA in vaccines.

Dr. Deisher is a genetic engineer with over 20 years experience in the pharmaceutical industry, from basic human biology through clinical trials.
Dr. Deisher obtained her Ph.D. in Molecular and Cellular Physiology from Stanford University and has spent over 20 years in commercial biotechnology.
Prior to founding AVM Biotechnology and Sound Choice Pharmaceutical Institute (SCPI), she worked with leading biotechnology companies, including Genentech, Repligen, ZymoGenetics, Immunex and Amgen.
Dr. Deisher is an inventor on 23 issued U.S. patents, and her discoveries have led to clinical trials of FGF18 for osteoarthritis and cartilage repair, and for Factor XIII for surgical bleeding.
Dr. Deisher was the first person to discover adult cardiac derived stem cells, and has been a champion of adult stem cell research, both professionally and privately, for two decades.
Dr. Deisher was a plaintiff in the U.S. federal lawsuit to prohibit use of federal tax payer dollars for embryo destructive research, which was instrumental in steering science towards adult stem cell research, which has led to 14 U.S. FDA approved adult stem cell products and the Washington Post Dec 2013 headline “Scientists Go Ethical in 2013.”
AVM Biotechnology is the marquee prolife biotech company worldwide, certifying that it does not use morally illicit material in any process. SCPI’s mission is to end human trafficking in biomedical research.
Members Of Brazil’s Parliament Broke Into Hospital That Claimed To Have 5,000 Infected & 200 Dead From COVID19 – The Hospital Was EMPTY
Reference: MedicalKidnap.com 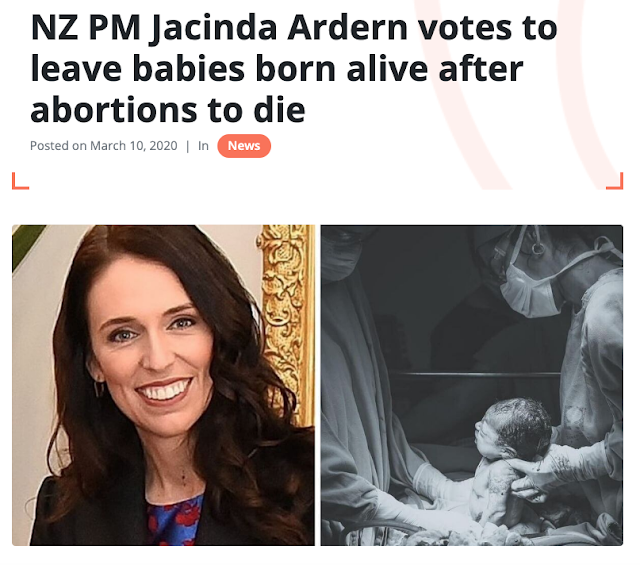 The Justice Minister says claims the Abortion Legislation Bill, which would take the procedure out of the Crimes Act, will result in "full-term" abortions is simply not true.

"Ninety-nine point five percent of abortions in New Zealand currently happen within 20 weeks. It's a very small percentage that happens after that," he told Newshub Nation on Saturday.

"It happens after that because of extreme threats to women or the foetus, and you've got to have that little bit of flexibility. But the extravagant language we get of 'full-term abortions' and women walking in at 36 weeks saying 'I want an abortion', it just doesn't happen. It's fictional stuff."

Email ThisBlogThis!Share to TwitterShare to FacebookShare to Pinterest
Labels: abortion