State houses being transferred to company owned by government ministers

This is crony capitalism and corruption at its worst.

The 2,800 New Zealand state houses are being transferred to a company, the Tamaki Redevelopment Company "to encourage regeneration"


A minority 41% shareholding belongs to the Auckland City Council

Thanks, Karen for the heads-up. 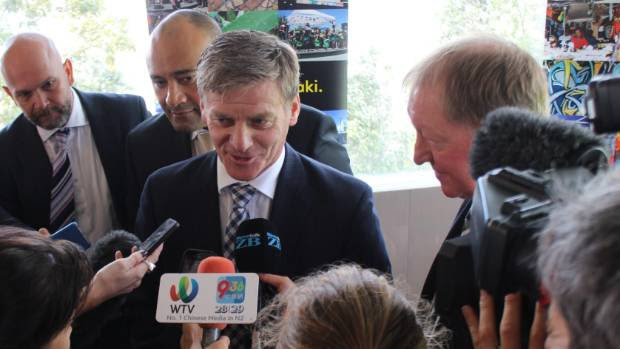 Ownership and management of 2800 state houses will be transferred to an Auckland redevelopment company, as the Government moves to offload some of its massive stock of housing in Auckland.

The houses will be transferred to the Tamaki Redevelopment Company (TRC), "to encourage regeneration", said Finance Minister Bill English and Building and Housing Minister Nick Smith in an announcement on Thursday.

English said the Government owned one in 16 houses in Auckland. 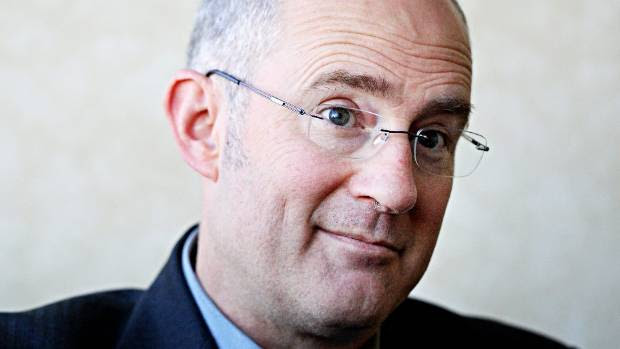 But confirmation of the offload came after Labour's housing spokesman Phil Twyford beat the Government to the punch, pre-empting the planned announcement and describing the move as "reckless".

English said Thursday's announcement showed the Government was "determined to do a better job" with social housing.

"The Government owns one in 16 houses in Auckland and we need to do a better job with them for the sake of tenants and aspiring homeowners, as well as for the neighbourhoods they live in and the wider city."

Change had been "slow to come" to Tamaki, "but we are determined for the next decade in Tamaki to look very different to the decade past," Smith said.

"This transfer of ownership of HNZC properties and the responsibility for tenancy management to TRC will enable faster construction of warm, dry and safe houses that better meet people's needs."

"This announcement gives the TRC the necessary levers to accelerate current neighbourhood redevelopments, start new initiatives, maintain momentum in the long-term programme and ensure that the company and its partners tackle the intergenerational challenges of the Tamaki community," Donnelly said.

Maungakiekie-Tamaki Ward Councillor Denise Krum said the large number of homes being transferred was daunting but also incredibly exciting.
"Housing New Zealand would not have just handed over these houses lightly to the Tamaki Redevelopment Company.

"So you can only draw the conclusion that they have a vested trust not only in their methodology but also in the people of the redevelopment company," Krum said.

The Tamaki announcement was separate to an announcement from the Government late last year, to sell off thousands of state houses to private social housing providers, who would take on vulnerable tenants.

On April 15, the Government released purchasing plans for its social housing programme, outlining the demand for social housing and how it expected to engage with providers.

The Salvation Army, which had reservations about the expectations of housing providers and complaints about the lack of information from the Government, walked away from any talks to be a sole housing provider earlier in the year.

Twyford said the TRC was a "fledgling" company, which did not have the expertise to look after 8000 tenants.

"Acting Prime Minister Bill English has been casting around to find someone, anyone, who will take state houses off him, in order to give his sell-off policy some legitimacy after the Salvation Army and the Methodist Mission panned the policy and ruled themselves out as buyers.

"The Tamaki Redevelopment Company has been setting itself up to lead the redevelopment of the area's housing stock. Now Bill English's desperation to sell off state houses has seen him foist 2800 houses on them, forcing them to become one of the country's biggest landlords overnight."

Twyford said the company had no plans to become a landlord.

"They came to Parliament only a few weeks ago and expressed frustration at the slow pace of redevelopment. They expressed no intention to become a landlord or social housing provider and no such intention exists within their annual report, constitution or letters of intent," Twyford said.

"In his desperation to look like he is doing something, Bill English's risky move at Tamaki could put a half-billion dollar asset, 8000 state house tenants, and an important urban renewal project in jeopardy."

But English said TRC planned to build about 7500 new houses in place of 2500 existing ones over the next 10 to 15 years.

"Over half of the new houses will be sold to help offset construction costs, and the remainder will be retained as social housing. Our bottom line is that there will be at least as many social houses in Tamaki as the 2800 there now."

Auckland Mayor Len Brown said it was a positive step towards the strategic long-term vision for the area.

"Our aim is to create liveable communities and affording housing options for people right across the region and the Tamaki area will be a testament to what we can achieve when central and local government work together."

Cabinet had also approved a $200 million loan facility for the company to accelerate the construction work at Tamaki.

The loan facility would be made available ahead of the transfer of the homes in order to allow TRC to progress its own development and planning.

This are the details of shareholding 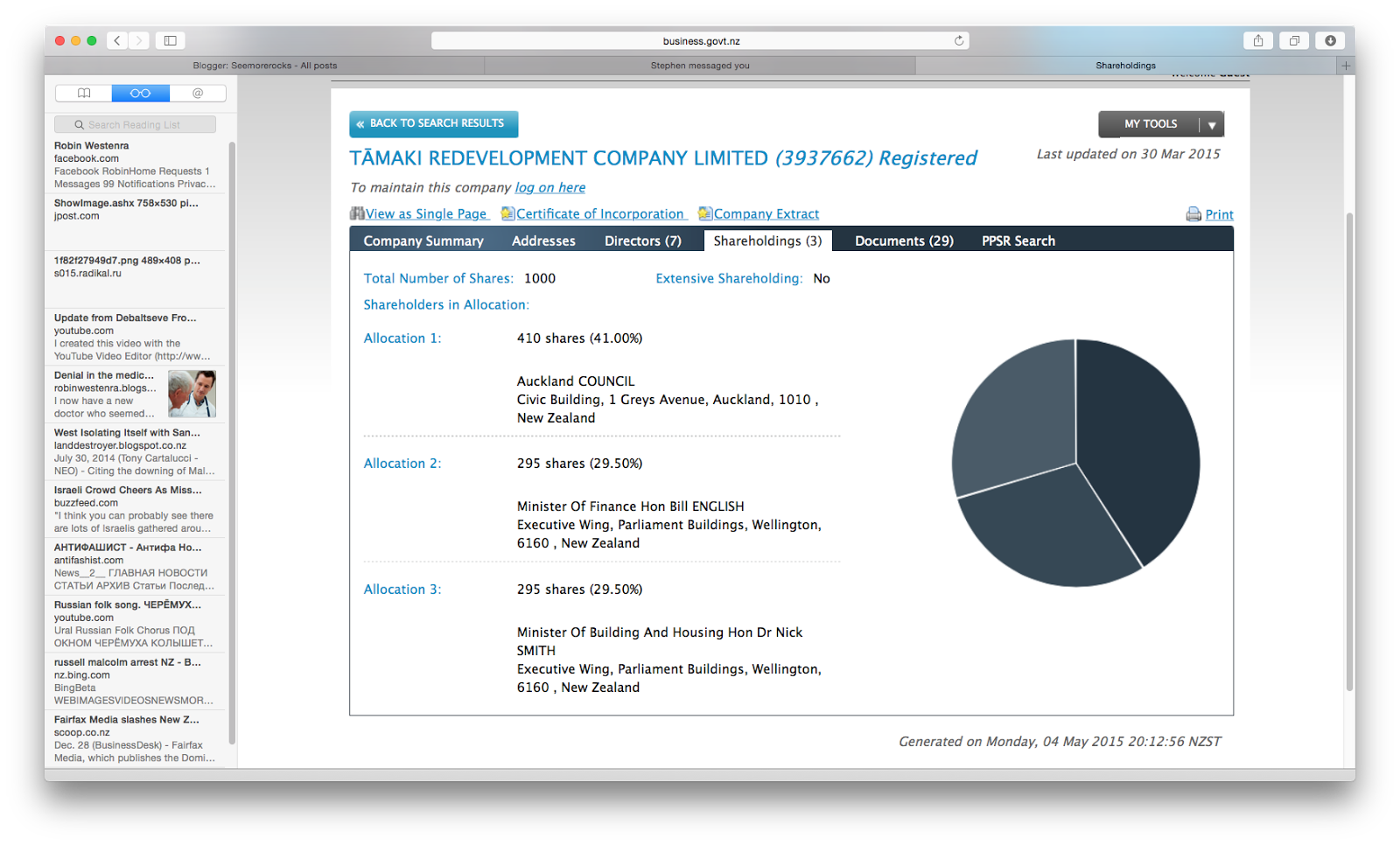 
The following would appear to explain this

Andrew Cox They already had the company they just used the share transfer as some propaganda see: here the holder of the Crown Shares may, at any time by written notice to the Company, appoint or remove in its sole discretion one person to be Crown Director;
10 mins · Like

Andrew Cox Here is the grouping of the shares
Groups of Shares: The Shares referred to in clause 17.1 will upon issue be divided into the following Groups:
(a) Crown Shares comprising the Shares to be held by:...See More
3 mins · Like

TAMAKI REDEVELOPMENT COMPANY LIMITED
The following information is provided by the New Zealand Companies Office. If you find or believe it is incorrect, please contact them at http://www.companies.govt.nz.

This is the “response” I got from one of the journalists who wrote the original article. See what you think. You might even like to let her know what you think.

Thanks for your email. The Tamaki company is a new one (about 3 years old I think) that is a joint venture between the council and government, hence the directors. The transfer is about moving the ownership and management from Housing New Zealand to social housing agencies, of which Tamaki is one. So yes, you would expect them to be the directors. Hopefully that clarifies things for you.