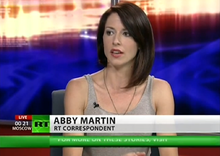 On her interview with Carolyn Baker Abby made comments about MH-17 along the lines that "the rebels probably did it".

I take issue with that, as well as previous comments where she criticised her employer, RT, on air over Russia's actions in Crimea.

In reponse, I wrote the following:


And Abby the following:

We don't have to agree on everything. But what in particular do you disagree with? Send me a link/story?
Unlike · Reply · 2 · 22 hrs

As I had not really responded to her question -  and as I have no way to correspond directly - I have written this open letter to Abby Martin.

May I say first off that I have huge respect for the work you do at cutting through the b..shit of corporate media.

Secondly , I can understand that your statements on Crimea and now on MH-17 have come after much reflection on your part

Thirdly, I think I have a sense of pressure there might be on you as someone working for “the enemy” - especially right now.

However, whilst I think I understand where you are coming from I do not agree with it and find it difficult to understand how anyone of good conscience who is in possession of the facts can take such a position.

I am not going to try and convince you of anything other than say that CONTEXT IS EVERYTHING.


People such Malcolm Fraser (ex- PM of Australia), Helmut Schmidt of Germany, amongst many others have come out and endorsed Russia's position (including the 'invasion' of Crimea).

First and foremost, I have great respect for what Prof. Stephen F Cohen, professor emeritus of Russian history (and adviser to previous US presidents) has to say about the situation.

If you haven't already (and I realise you are probably super-busy), I strongly urge you to listen to Prof. Cohen to understand some of the context.

Two of his recent interviews are here:

Two of the most important points in my mind (in understanding this are:

War has been brought through the treachery and aggression of one side practically to the gates of Moscow.

When looking at European history (and especially Russian history, which has a specially heavy karma) an understanding of the historical context is ESSENTIAL.

I am not going to talk about MH-17 other than say that the following article gives a good summing up of the evidence for the Ukrainian government being behind the shooting-down of MH-17.

I have been following people that I have come to trust – Russian and non-Russian. They include Mark Sleboda in Moscow; Vladimir Suchan (who is Czech, not Russian) – on Facebook - and the Saker.

Generally on reliability I would say that EVERY source has its own biases, and it is incumbent on us to find out what those biases are ( this is what you do so well!)

I would be interested if RT has engaged in any conscious DIS-information (in the sense of Fox, CNN, BBC). If it has it has escaped me.

If I was in your place I'm sure I would be listening to your Russian colleagues and trying to understand their heartfelt views on this – and listening to someone like Aleksey Yarsohevsky I cannot accept that it is anything OTHER than heartfelt and sincere. The man's heart is bleeding for Ukraine.

One final point – If I did not have such esteem and admiration for what you are doing I would not be bothering to write this. I trust you will take it in the spirit it is offered.