The legacy of Fukushima

“Gary Stamper was Carolyn Baker's guest on the LIFEBOAT HOUR two weeks ago. This is dead, spot on, not exaggerated and totally consistent with all the scientific dots I've been bringing to you since the quake.

Read this carefully. Read all of it. And then add it to the interview I did with Guy McPherson on last week's show


At the Very Least, Your Days of Eating Pacific Ocean Fish Are Over
by Gary Stamper 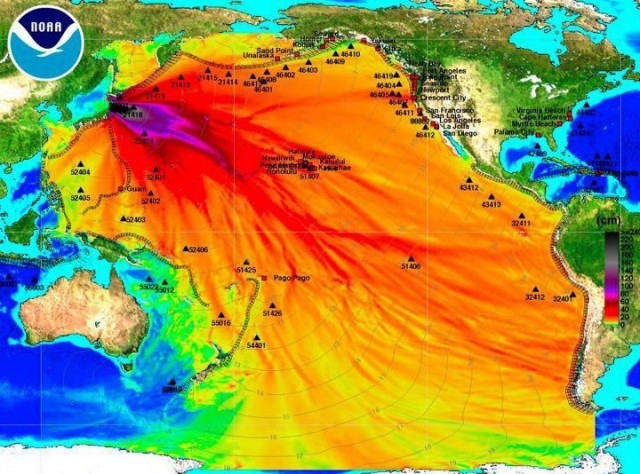 The heart-breaking news from Fukushima just keeps getting worse…a LOT worse…it is, quite simply, an out-of-control flow of death and destruction. TEPCO is finally admitting that radiation has been leaking to the Pacific Ocean all along. and it’s NOT over….

I find myself moving between the emotions of sorrow and anger.

It now appears that anywhere from 300 to possibly over 450 tons of contaminated water that contains radioactive iodone, cesium, and strontium-89 and 90, is flooding into the Pacific Ocean from the Fukushima Daichi site everyday. To give you an idea of how bad that actually is, Japanese experts estimate Fukushima’s fallout at 20-30 times as high as as the Hiroshima and Nagasaki nuclear bombings in 1945

There’s a lot you’re not being told. Oh, the information is out there, but you have to dig pretty deep to find it, and you won’t find it on the corporate-owned evening news.

An MSNBC article in April of 2012 reported that seals and polar bears were found to have “external maladies” that consisted of fur loss and open sores, obvious signs of radiation burns from the Fukushima meltdown, despite the conclusions of the article.

Since the summer of 2011, U.S. scientists have observed several dozen living and dead Pacific Ocean marine mammals with a strangely similar condition of skin sores and hair loss. These animals may be suffering from ‘beta burns,’ which are caused by significant external exposure to ‘beta emitters’ such as radiostrontiums, which were released in copious quantities to the Pacific Ocean at Fukushima Daiichi in 2011


IS THE PACIFIC OCEAN FOOD CHAIN DOOMED? – May 2013 – Incredibly worrisome levels of cesium, including short-lived radioactive cesium-134, have been found near Hawaii in the LOWEST part of the marine food chain: plankton. Levels up the food chain, i.e. fish, whales, seals, due to bioaccumulation, MUST be magnitudes higher in contamination now or soon – stop eating Pacific wild seafood now – Researchers find high cesium in some Pacific plankton

SEAFOOD LOVERS ACROSS THE WORLD – The ‘levels’ of radiation in the seafood you are eating now and in the future certainly contain Fukushima radiation but will be considered ‘safe’ by government scientists. Let’s boil it down quickly: Scientists say the only safe level of radiation is zero. YET, governments set ‘limits’ for radiation in food well above zero. These limits actually increase every decade or so. If you love nuclear power and nuclear weapons complexes, then you should accept these limits as well as the fact that a fraction of our cancer epidemic is blamed on nuclear emissions. If you don’t want people (or yourself) to die of cancer to preserve nuclear power and nuclear weapons, then you should heed the scientific consensus conclusion that the safe level of radiation is zero becquerels of anything. Unless you are a nuclear nut, please protect your own health and regulate your genetic stability for the sake of your children, grandchildren, etc…by NOT EATING SEAFOOD OR CONSUMING ANYTHING MADE IN THE SEA. Learn more about food safety.

Bluefin tuna will grow in radioactivity over years with each migration back to West Pacific; older caught fish will be hotter

All Pacific migratory fish are probably Fukushima contaminated – why isn’t this all over Twitter?

Alaska Halibut also found with same Fuku-cesium contaminant – but did not migrate to Japan’s waters. How did cesium-134 get into Alaska halibut?

Bluefin tuna in 2012 study aren’t all equally radioactive; sample #8 contained 50% higher cesium concentrations than the average of the 15 samples

Bluefin scientists did a most non-stellar job. They cherrypicked isotopes for dose comparison.

FDA is telling media and consumers it is ‘testing fish.’ It is testing imports and not testing U.S.-caught wild seafood (billions of pounds caught annually in U.S.) More

Cesium-134 is marker for strontium-90 – causes bone cancer and immune-disorders; babies are ‘sponges’ for calcium and strontium

FDA saying levels are safe is a lie. FDA says its intervention levels will kill people. Downplays risk as ‘small’ compared to our ~40-50% cancer rate. But much of that rate is prolonged fallout effects from 1960s.

Alvarez asks would a 1950′s NPR ‘trivialize’ ‘impacts of open-air hydrogen bomb testing?’ You bet. Our government and media is herding us into rail-cars destined for another radioactive holocaust.

“There’s a hell of a lot [of debris] coming towards you. Huge, huge amounts. Because you saw the tsunami come in and take it out. And, of course, some radioactive fallout will have fallen on that, but I’m much, much more worried about the radiation in the ocean.

Woods Hole has said that it’s far more than Chernobyl ever was; [they've] never seen or contemplated anything like this and it will be reaching you quite soon I think in the ocean currents and the fish.

And the fish swim 1000s of miles. The EPA is not testing your fish caught on the West Coast. You should be testing your fish routinely.I would be very cautious about…I don’t know how long it takes for the fish to get here. It’s already been a year.

The fish will be radioactive and I don’t think I’d be surfing.”

What is the greatest threat to humanity? We are, of course….and our technology. Like a dangerous weapon in the hands of a child, technology has overtaken our capacity to control potential consequences.  Oxford University’s Future of Humanity Institute, led by director Nick Bostrom, says we have entered this new kind of technological era that we have no track record of  surviving.

Our technological intelligence may have the potential for creating a better world, but so far, in areas of the economy, genetics and biologics, arms and warfare, security and surveillance, as well as the environment and energy, technology is also completely indifferent to the law of unintended consequences.

Fukushima is what happens when we have the moral responsibility of infants and the technology of adults.