Violence will rise as climate changes, scientists predict
UC Berkeley researchers pull together data on ancient wars, road rage and more, and conclude that violence may increase between now and 2050 because of higher temperatures and extreme rainfall patterns. 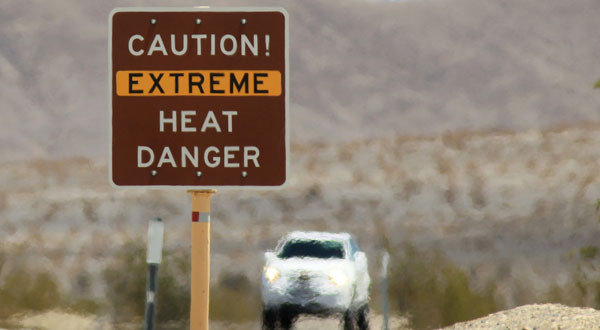 "Every booze party ends in a fight," he wrote in his 1938 story "Red Wind." "Meek little wives feel the edge of the carving knife and study their husband's necks. Anything can happen."

While social commentators have long suggested that extreme heat can unleash the beast in man, formal study of the so-called heat hypothesis — the theory that high temperatures fuel aggressive and violent behavior — is relatively new. Using examples as disparate as road rage, ancient wars and Major League Baseball, scientists have taken early steps to quantify the potential influence of climate warming on human conflict.

Now, three UC Berkeley researchers have pulled together data from these and other studies and concluded that the incidence of war and civil unrest may increase by as much as 56% between now and 2050, due to warmer temperature and extreme rainfall patterns predicted by climate change scientists.

Likewise, episodes of interpersonal violence — murder, assault, rape, domestic abuse — could increase by as much as 16%, they report in a study published Thursday by the journal Science.

"We find strong causal evidence linking climatic events to human conflict … across all major regions of the world," the researchers concluded.

The study assumes a global temperature increase of at least 4 degrees Fahrenheit over the next half-century, based on data from the World Climate Research Program in Geneva. It also assumes that humanity will do little to adapt to large changes in regional climate or altered rain patterns, such as developing new heat and drought-tolerant crops.

With those ground rules established, the team examined 60 papers across a variety of fields — including climatology, archaeology, economics, political science and psychology — and analyzed them against a common statistical framework.

Study topics ranged from the trivial to the sublime.

In one paper, researchers held up traffic at a sweltering Phoenix intersection to see whether motorists in cars without air conditioning were more likely to honk in anger than drivers in climate-controlled vehicles. In another, psychologists looked at weather records and Major League Baseball statistics to see whether pitchers were more likely to throw bean balls at opposing batters as the mercury rose.

Still others used data from tree rings in Southeast Asia to gauge the influence of severe drought on the collapse of the once-mighty Angkor kingdom, or analyzed sediment from Middle Eastern seas to determine how desertification influenced the fall of the Akkadian Empire more than 4,000 years ago.

"The result is alarming," said study coauthor Marshall Burke, a UC Berkeley graduate student who specializes in how climate change affects food security. "However, if we get our act together and we mitigate future climate change ... the effects will be much smaller."

The authors say they can only speculate on the reasons why increased temperature and changed patterns of rainfall would move humans to violence.

One traditional explanation is that climate shifts hit agrarian economies particularly hard. "People are more likely to take up arms when the economy deteriorates," said study leader Solomon Hsiang, who examines the policy consequences of climate change at UC Berkeley.

Hsiang and his colleagues make no attempt to establish a clear cause, though they say there might be a physiological link between heat and aggression. But they are not biologists; their intent, they say, is to spur further research and encourage adaptive planning in the face of global warming.

"We like to compare it to smoking," Burke said. "In the 1930s scientists were figuring out there was this really strong relationship between smoking and lung cancer, but it wasn't for many decades after that they figured out the precise mechanism that links smoking to lung cancer."

Researchers who weren't involved in the analysis praised the team for their ambitious attempt to synthesize data from a variety of studies in disparate fields.

The paper "presents a strong case for the effects of rapid climate change on violence," said Craig A. Anderson, an Iowa State psychology professor who studies violence. "There is considerable evidence that when people are uncomfortably hot, they become more physically aggressive. They tend to interpret minor annoyances as being more serious and intentional provocations than they would in comfortable temperatures."

Yet others said the paper fell short of its intended goal.

"The study does not give a single example of a real conflict where both data and qualitative evidence suggest that the violence was caused at least partly by climatic anomalies," said Halvard Buhaug, a professor of political science at the Peace Research Institute Oslo in Norway.

An accompanying editorial by Science Editor in Chief Marcia McNutt, a geophysicist, did not address the study specifically, but instead called on scientists from different fields to help study the cumulative impacts of climate change.

"There is a need for all scientists to rise to this challenge," she wrote.