Iran "no longer concerned" about uS aircraft carriers


Iranian Revolutionary Guards: US 'Carriers Scenario is Over' 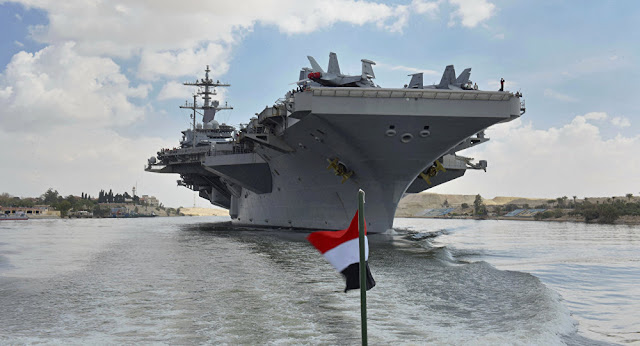 The US has recently been increasing its military presence in the Middle East amid growing tensions with Iran. Among other things, Washington has sent one of its aircraft carrier strike groups to the Persian Gulf in a bid to "deter" an alleged Iranian "threat".

Commander of the Islamic Revolution Guards Corps (IRGC) Major General Hossein Salami has stated that Tehran is no longer concerned about Washington sending its aircraft carriers to its borders, as the country now possesses a means to counter them, Fars News reported. According to him, Iran has obtained a system capable of "steering a ballistic missile" towards any mobile target, calling it a "miracle" of technology possessed by only a handful of states.
"The aircraft carriers’ scenario is over for us. Today, we are a great and invincible power because we have experienced and defeated all of the enemy’s scenarios", he said.
Salami further stated that Iran has managed to "shatter" US psychological warfare operations and dried up the "enemy's capacity for war". The IRGC head noted that Iran is no longer confined to its borders and has become a robust regional power. He also rejected recent threats made by officials in Washington, stating that Tehran is already "saturated with them".
"We are not worried by enemy intrigues and are in the last phase of the battle against it", Salami said.
His words come as tensions between the US and Iran show no signs of abating. The US has sent an aircraft carrier to the region under the pretext of deterring an alleged Iranian "threat" and has recently announced the deployment of 1,500 troops and B-52 bombers to the Middle East for the same purpose.
READ MORE: Iran Lambasts Bolton's Accusations of Involvement in Attacks on UAE Oil Tankers

Iran has repeatedly slammed such moves, saying that certain circles and warmongers within the US administration are trying to push it towards war with Tehran. At the same time, Iranian Supreme Leader Ali Khamenei has stated that the country's people do not seek war with the US, but also vowed that Iran would resist US pressure until it retreats