Kevin Kamps joins the dots on the Chernobyl fires

'Each fire around Chernobyl re-mobilizes poison'

As opposing views on the Chernobyl fires persist, nuclear waste expert Kevin Kamps believes the problem is now an international one, requiring multi-faceted efforts. The region is a tinderbox, as each fresh calamity rearranges the deadly poisons.

RT: How serious are the wildfires in effecting the radiation levels in the region?

Kevin Kamps: It is significant and it is not a one-time affair. There have been many fires over the years, and with climate change, with drought, with the death of the forest from the radioactivity in the first place, the fact that the litter, the leaves and the dead tress will not decay properly, again because of radioactivity.

This is a tinderbox and there is always potential for a catastrophic radioactive wildfire. Each of these fires is remobilizing poison, cesium 137 and strontium 90, plutonium of different isotopes into the air. So the firefighters are in harms’ way. Anyone down wind who breathes it, could ingest these poisons and that can result in cancer or other diseases.
RT: You have been in Chernobyl yourself. What was your impression and how is the area reacting to what had happened in the original нdisaster?

READ MORE: ‘No one tells us the truth’: Locals near Chernobyl fear radiation, Kiev says fire put out

KK: I've flown to Ukraine and Belarus a number of times in the years and decades, all related to Chernobyl activities. And this is an ongoing catastrophe in so many ways. Every spring thaw, with the snow and the ice, the very water solvable cesium will wash into the waterways, the surface waters. It could contaminate drinking water supplies. So unfortunately the radioactive ecosystem, the radioactive environment that people live in is an ongoing risk.

RT: What you're saying is contrary to what they're saying. Their claim is there is no radiation threat. What do you make of that?

KK: First of all, you need very significant radiation detection equipment to know what is going on. And every different approach in trying to figure out what is happening in the environment requires different equipment, whether it is in the air, the water, or food supplies.

You have to have the right equipment to even know what is going on. Our senses aren't really geared toward detecting radioactivity. Although it is very telling that the firefighters testified about tasting metal and feeling a tingling on their skin due to these radioactive fires. That is an indication of significantly high levels of radioactive contamination.

RT: Locals are claiming they didn’t have any evacuation instructions at all...

KK: This is an international issue and Ukraine should not be left alone with it. Because the risks are international down wind and down stream, resources should be made to deal with those threats. So certain areas of the forest may need clear cutting to prevent this from happening.

Certainly, firefighting equipment sufficient to meet this challenge has to be put in place. And of course the firefighters themselves need to have respiratory protection.

RT: Can these fires at the moment reignite the original levels of radiation?

KK: To give some idea, there have been scientific studies done by Timothy Mousseauat at the University of S. Carolina and a team of colleagues. Their determination is that the fires of 2002, 2008 and 2010, just three of these fires, excluding 1992 and 1996, have remobilized 8 percent of the original cesium 137 contamination back into the atmosphere, which is really significant because it was a such a large amount of contamination.

So for eight percent to go back up into the air just because of three of these fires, not to mention any of the others, is very significant indeed.


From the Russian meteorological service a map showing the location of the fires/. To the immediate right is Pripyat' and to the right (and down) is Chernobyl' 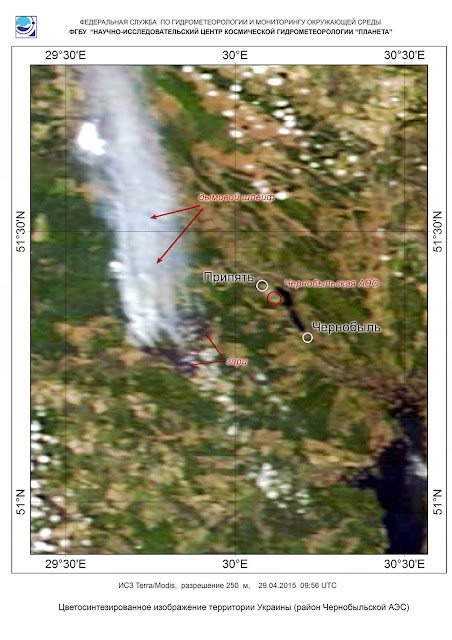