An elected dictatorship in New Zealand

Deconstructing the results of 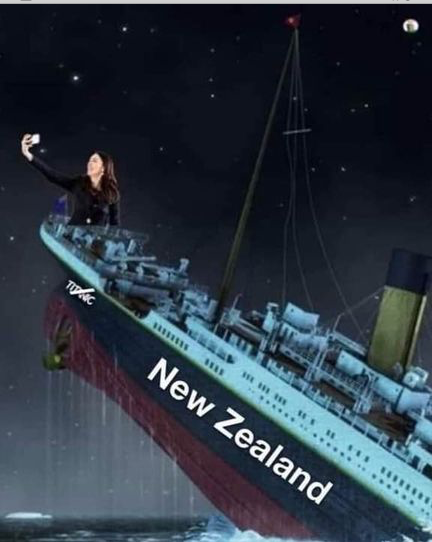 This last weekend saw an election in New Zealand. The results of the elections was easily foreseen. It was no shock.

And the population, driven by fear and gratitude for being delivered from what is a COVID-19 Plandemic.

People are so grateful – we seem to have even found a solution to the common cold and flu by getting people to wear masks and hideaway.

It’s just a pity that it cost the economy and many other aspects of our national life and to get this wondrous result.

I have been far more interested – and concerned by – events as they are unfolding in the United States at the moment. I was so interested in the election results as they were coming in they went to bed I’m at my usual time, which is about 8 pm. 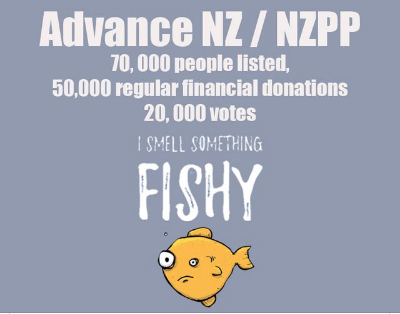 I am so disenchanted with New Zealand politics that I was not going to vote at all I but I based on the scurrilous campaign against a small party that opposes government policies on the pandemic lockdown as well is its New World Order policies and cuddling up to China that I did get out to vote and voted for the party that got 20,000 votes Despite having 70,000 people listed and  59,000 regular financial donations

I am not going to say that this was a rigged election and some on social media have suggested but there is certainly some glaring irregularities.

There were two things that happened in the days leading up to the election.

The first was that a day or so before Saturday’s election Facebook took down Advance NZ (that’s Billy te Kahikas party). Given the perfect timing And the riddle of the results I find it hard to say that this is a coincidence and FB just “chose” that moment to strike.

Nothing of course can be proven but it is highly suspicious and I have heard rumours that I have been unable to confirm, that the debt-ridden government gave $53 million to Facebook (to Facebook!).

What if that is true? The NZ GOVT being able to rely on the social media giant to come to the rescue and remove the presence of a highly inconvenient party that got under the govt’s skin. 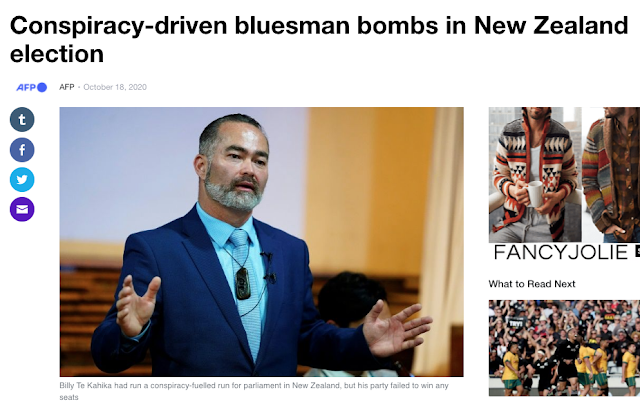 The second involves Winston Peters, who the public has been taught to hate. 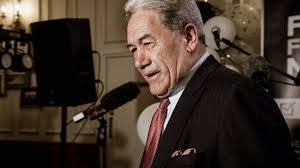 In the days leading up to the election a case being brought to the serious fraud office about the New Zealand first foundation, connected to Winston Peters, its leader who was largely instrumental in keeping the government in power as well as providing a check and perhaps even counterweight to the other left-wing parties - Labour and the Greens. 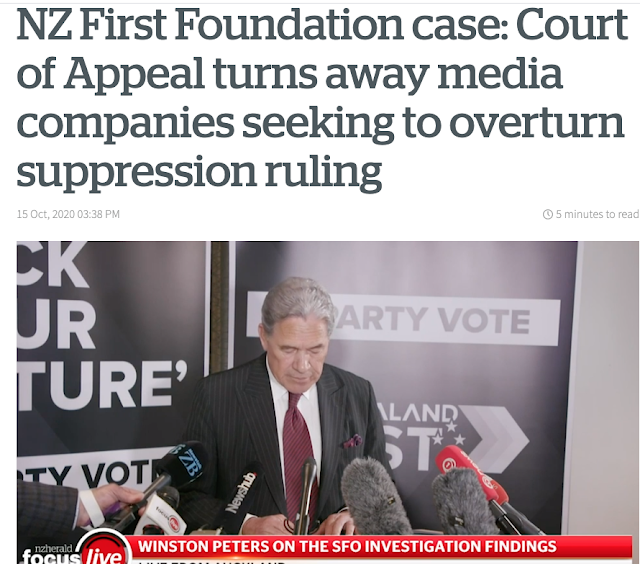 I am unaware of the details but this has happened when governments have wanted to rid themselves of an inconvenient presence.

I have watched while since the election Winston Peters, who is our most senior politician and I would say senior statesman has been almost disrespected and certainly not given the accolades that I think due to him.

He is the only politician across-the-board who has ever talked about the astronomical debt levels and the travel our Economy is in. 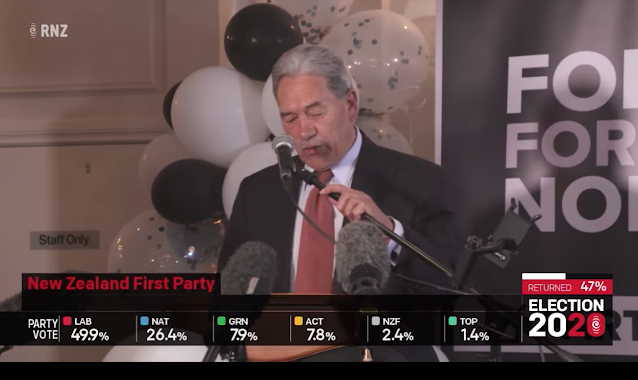 Peters has been the only one to have pointed out that this economic crisis preceded, but was made much worse by  the Covid crisis.

I have felt more and more like an internal exile on a distant and isolated island because I am surrounded by such denial that there is a serious problem.

Everyone thinks Jacinda has made such a fantastic job.

Just have another look at the debt levels. 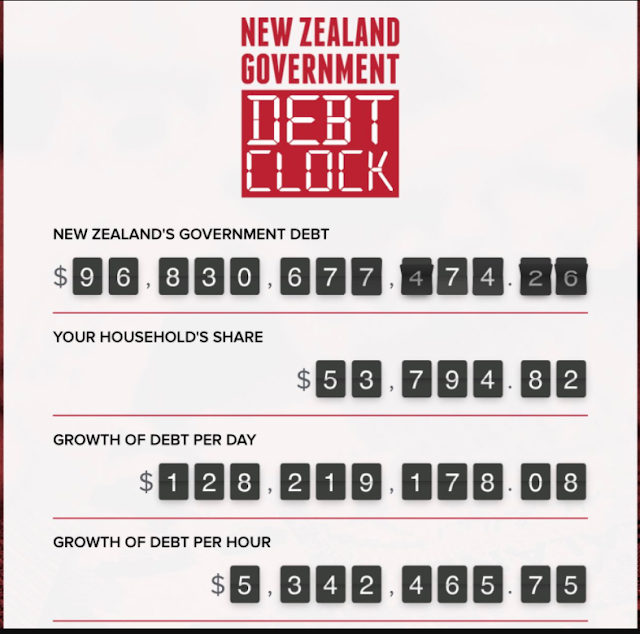 I did a quick back of envelope calculation.

NZ’s govt debt (who knows what private debt levels are) at 96 billion dollars is huge.

Houston, we have a problem

And yet, there is almost total denial across the board. Why not just keep borrowing into infinity and doubling the money supply when there is almost nothing in the economy to even start to pay it off.

I don’t know off hand what tourism’s share in our export earnings but it has dried up.

There is practically no real economy left.

And then there is this.

Jacinda Adern has pledged $65 m for arts and culture 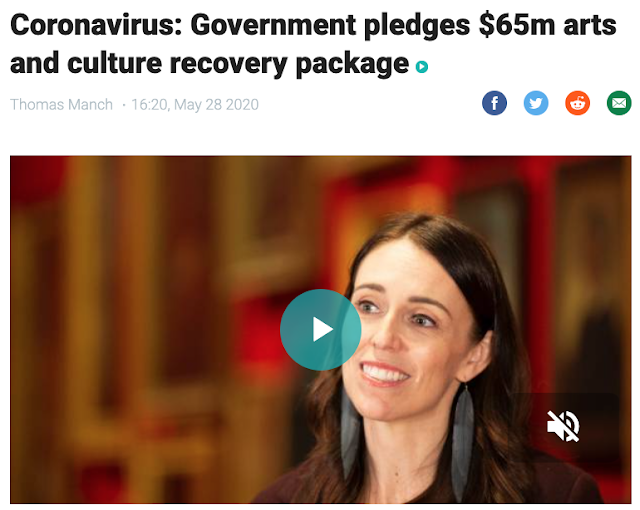 And yet the pickers who come from the Pacific islands every year to pick out fruits and vegetables have been refused entry into NZ.

Given that our traditional trading partners are in their own deep shit I suppose the answer is to cuddle up to China, even more than we have in the past.

And I am not the only one to say it. 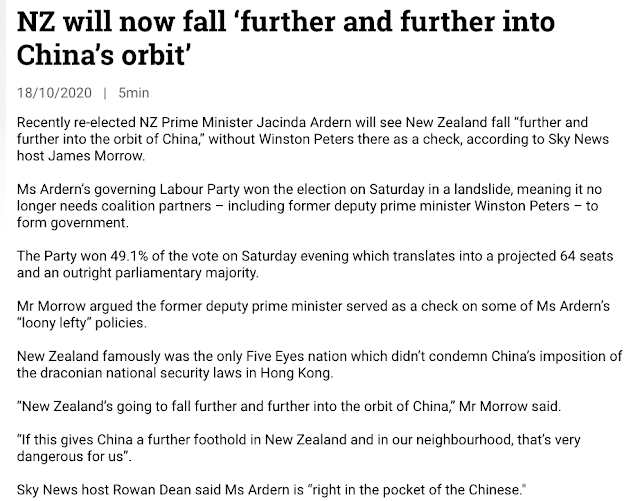 I did pick up a couple of interesting little things from the coverage I did hear on election night.

The first is from Jim Bolger who was the last PM of the old school, in the 1990’s. 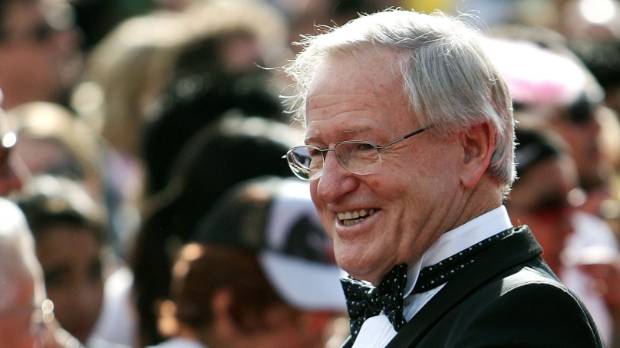 He, it seems to me, I’d worried about the right thing

And our own ex PM, Helen Clark who, I suspect, might be eying up a vacancy for the Sec Gen’s job when it becomes vacant said something that it would be hard to see as anything other than CODE for the Great Reset, so beloved of the World Economic Forum. 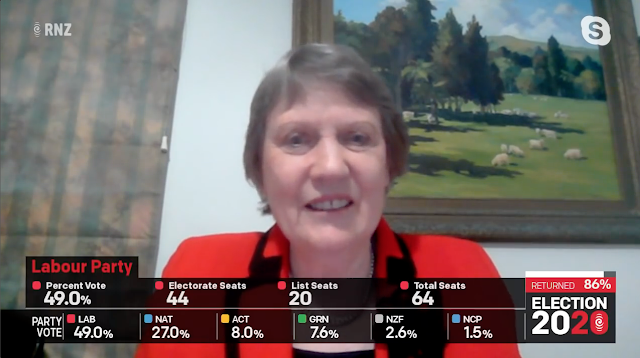