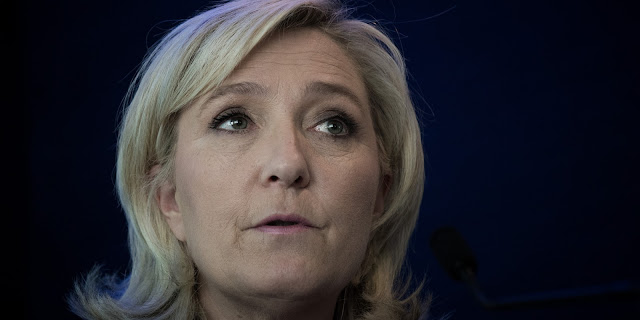 That Marine Le Pen has gained sufficient electoral support to have pushed aside the two traditional French political parties and is one of two candidates for President of France on May 7 has Washington, the EU, and the French elite determined that she be defeated at all costs.

Washington has called out into the Paris streets in protests the American supported NGOs. The EU and the French elites are alleging a misuse of EU funds by Le Pen and are trying to find some loophole through which they can strip Le Pen of her immunity and lock her up.

The outgoing French president, Hollande, a Washington puppet, tries to paint Le Pen as a fascist because she is opposed to France’s domination by Washington, which includes accepting the imposition of millions of refugees from Washington’s wars on the French people. Le Pen’s opposition to Muslim refugees is presented as a moral defect, but Hollande and Sarkozy’s support of Washington’s illegal wars that have murdered millions of Muslims and produced the refugee flow is portrayed as “standing with Washington against terrorists.”

I think that Washington and the EU elites are in a snit for no reason. The French are as insouciant as the Americans and have little awareness of what serves their interests as opposed to the interests of the French and EU elites.

Le Pen is showing that a large segment of the French population is dissatisfied with the policies of the French government. The elites are trying to discredit this expression of dissatisfaction as illegitimate. In other words, it is a moral defect for a French politician to stand for France. That is “fascist nationalism.” Standing for Europe and diversity and American domination, that is the only accepted position.