TEPCO is behaving as though it is the victim of the largest industrial accident in the history of time rather than the perpetrator. Fairewinds Energy Education's Arnie Gundersen analyzes new leaks at Fukushima Daiichi Unit 3 and discusses TEPCO's negligence in not applying engineering rigor to its analysis of the leaks.

Link to Fairewinds Speech at the New York Academy of Medicine: bit.ly/1lnUCEa

Around 100 tons of highly radioactive water leaked from one of the tanks at Fukushima Daiichi nuclear plant, the plant's operator, Tokyo Electric Power Co. (TEPCO) said on Thursday. 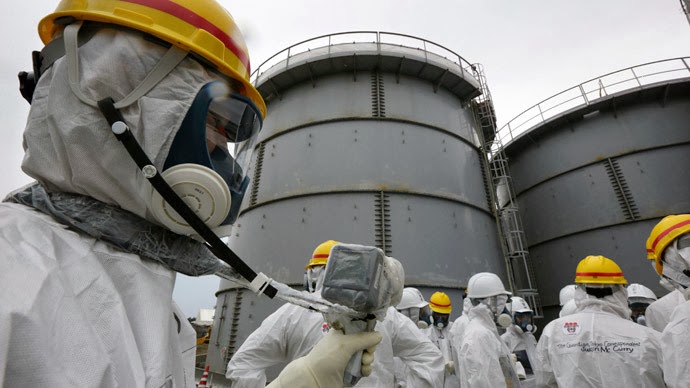 RT,
20 February, 2014
The water reportedly spilled beyond the barrier that is set up to block it from flowing out of tanks.
A process to stop the radioactive leak is underway. The spill is said to contain 230 million becquerels per liter of strontium and other beta ray-emitting radioactive substances.
TEPCO believes the leakage has not reached the adjacent sea, as no drain was found.
The leak was discovered by workers on patrol at around 11:25 p.m. local time on Wednesday.

Airborne plutonium detected outside troubled U.S. nuclear facility — Expert: ‘Radiation event’ appears to have occurred, leading to a release; “Levels are highest ever detected” around site

Nun sentenced to years in prison for nuclear site sabotage — Sister Rice pleads with judge to give her life behind bars, “Greatest honor you could give me” — Yale scholar mentions her along with Gandhi, MLK — TV: Highly unusual hearing, judge repeatedly says how much sway they have to affect change

TV: Bald eagles dying at rate “much higher than normal” and it’s not from West Nile virus as previously claimed — Now around 60 dead in Utah since December — “We feel helpless, we don’t have a lot of answers” (VIDEO)

NBC: ‘Bizarre’ cluster of severe birth defects haunts experts in Pacific Northwest — “I definitely believe something is going on… Maybe it just hit once and blew through” — Officials refused to say how many new cases in 2013 — County on border of most polluted nuclear site in Hemisphere

LA Times: Expert says ‘radiological process’ may have forced material out of container at US nuclear site, “Could be a mess”; Officials saying little about extent of problem — Levels remain too high to let in non-essential personnel — Air monitors not allowed to collect filters

CNN: Alarm due to radiation spike brings ’1st-of-its-kind’ response at US nuclear site — Inspections cancelled, no one able to enter facility due to ‘high radiation’ levels — Reuters: Plans got called off over ‘safety thing’ — Gov’t: ‘Pretty sure’ we know where leak is — Local TV calls it ‘emergency’ (VIDEO)

New Forecast Released: ‘Most’ Fukushima nuclear particles will move east across Pacific — Narrow line of radioactive pollutants to make it all the way across ocean this year — Uses decades of data (GRAPHIC)

Alarm after ‘unusually high’ radiation levels at U.S. nuclear site — Gov’t: “We’ve never seen a level like we are seeing… I can’t tell you the amount” — Could be Plutonium — ‘Unclear’ how much radiation released — Unprecedented event (VIDEO)

Gov’t Report: Plutonium releases from Fukushima a major concern — ‘Uncertainty’ over how far molten fuel has eaten through “what remained of primary containment”

US to Support Fukushima