I cannot vouch for the source of this, but am posting anyhow. Radcast is posting up-to-date inforamtion as it comes to hand 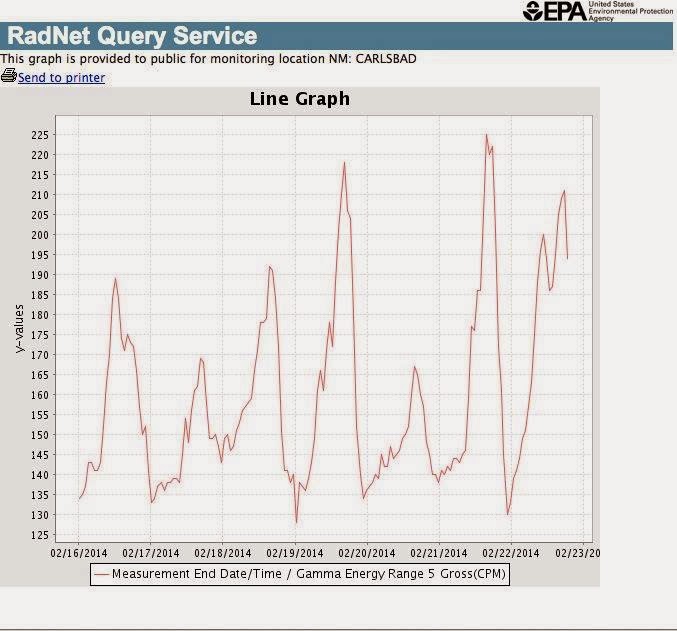 February 23, 2014 -- (TRN) -- For the first time, all Radiation Detectors in the nationwide "RADnet" operated by the U.S. Environmental Protection Agency (EPA) are suddenly "OFFLINE." Right now, this nation is completely, totally vulnerable to the movement of radioactive materials into positions to enable an attack and we would have no warning whatsoever. This is the perfect opportunity for a "dirty bomb" attack or some type of "false flag" attack against ANYPLACE in the ENTIRE United States.*** THIS STORY IS UPDATED BELOW AS OF MON. FEB. 24. ***

EPA is claiming there is a "technical glitch."   No word on when -- or if -- RADnet will  be operational again.

UPDATE: Monday, February 24, 2014 -- It now appears that the OFFLINE status of the EPA "RADnet" may be **DELIBERATE.**  According to sources in New Mexico, the "RADnet" had to be shut down to conceal the leak of radiation from the Waste Isolation Pilot Plant (WIPP) in Carsbad, New Mexico, which is onlging and presently spreading radiation into the air from its ventilation system. That plant is the only location in the United States that receives, processes, then stores (deep underground)  radioactive materials from former nuclear warheads.

According to the POTRblog.com (POTR), a proven reliable source with inside information on the internal happenings at the WIPP  Plutonium disaster has provided a radiation reading for Saturday 2/22/14, taken before and after HEPA filtration of the exhaust air from the WIPP mine shaft. Based on that information, and using risk mitigating assumptions, POTR calculated that Plutonium and Americium are CURRENTLY being RELEASED INTO THE OUTSIDE AIR at a rate of 400,000 Disintegrations Per Minute (DPM), for every single minute the ventilation system is running. For those more comfortable with the Becquerel as a unit of measure, that works out to the plant exhausting 6,667 Becquerels of Plutonium and Americium PER MINUTE into the outside air.

The POTR source reported that at Station A (prior to HEPA filtration) that the small amount of air which is being sampled returned a reading of several hundred DPM's; and that the POST HEPA FILTERED AIR was reading approximately 20 DPM's.

WIPP planning documents indicated that their ventilation system has 3 fans, which which add up to at total ventilation capacity of 20,000 Cubic Meters of Air per minute. The ventilation system has 4 circuits. It is unclear which circuits are running, or at what rates. It is also unclear if there are even higher concentrated released going out of the other shafts at the plant. But given the information available, the wise risk mitigation based measurement for current releases is 400,000 DPM's every single minute.

It is also important to note that the sampling filters are tiny in comparison to the over all airflow, only a small subset of air is measured. The photos of the Station A sensors/ filters show a pipe roughly 1/2 inch in diameter as the air sample source. The actual exhaust pipe is tall enough for a person to walk in. The plant also has 4 ventilation zones, it is unclear which zones are currently being ventilated. Hence 400K DPM per minute is the MINIMUM Radiation release number on which a wise person would base risk mitigation decisions.
During the first 30 seconds of the disaster before HEPA filtration started, POTR calculated that a Plutonium + Americium cloud of 6.6 BILLION DPM's (110,000,000 Becquerels) passed by a radiation monitor 1/2 a mile North West of the Plant.

Those numbers do involve assumptions forced upon POTR by Department of Energy (DOE)  because they don't release the full context of the their detections (they prefer to use Bananas as a basis of radiation exposure). POTR numbers are based on conservatively risk mitigating public health exposure, with context derived from WIPP data gleaned from the EPA permitting documents.

In that regard, understand that when  WIPP  release this data in a few days, you can expect AT BEST they will only mention 20 DPM being measured. Don't expect them to deliver the truthful context of what that means, nor should you expect them to release the RAW DATA and info to check their calculation. It is of utmost importance to them that they control the narrative of what is happening at WIPP.

More details as they become available.

Radcast.com is posting up-to-date information on this situation as it develops. GO HERE

I just read the warnings by Optimal Prediction and Potrblog about the plutonium release in New Mexico:

The story about the plutonium leak at Carlsbad nuclear waste site explains those high radiation levels so consistently detected by the EPA there. I always thought the jet stream must dip down there and deposit Fukushima fallout, which probably happens, but now I realize that the waste site there must be consistently contaminating the atmosphere. Whatever is going wrong there must have worsened substantially on Feb 12 when the alarm sounded.

I don’t know if releases are ongoing, but my guess is that they’ve not ceased altogether.

I am seriously trying to assess the risk to my family. We live in the Phoenix area of Arizona. Although the jet stream flows east, high above us, our lower-level wind patterns sometimes are westerly blowing, coming out of the local north east (New Mexico and Colorado). I don’t want my family to be exposed to another great genotoxic assault.

Plutonium is chemically toxic as well as being radioactive. The alpha particles shed by decaying Plutonium atoms are very effective missiles that can destroy cells and shatter DNA bindings. Beagle dogs injected with plutonium did not fare well. Read The Plutonium Files to learn all about all the ‘scientific’ injections of plutonium in prisoners and laboratory animals.

On March 25, 2011, Dr. Yablokov, author of Chernobyl: Consequences of the Catastrophe for People and the Environment, warned of the potential scale of the Fukushima disaster given plutonium fuel was involved :
We are seeing something that has never happened – a multiple reactor catastrophe including one using plutonium fuel as well as spent fuel pool accidents, all happening within 200 kilometers of a metropolis of 30 million people. Because the area is far more densely populated than around Chernobyl, the human toll could eventually be far worse in Japan… I am not optimistic about the situation at Fukushima. . .It’s especially dangerous if plutonium is released as inhalation of plutonium results in a high probability of cancer. A release of plutonium will contaminate that area forever and it is impossible to clean up. [end]

Also speaking at the press conference was Cindy Folkers, radiation and health specialist at Beyond Nuclear:

At Fukushima, our concern is not just the immediate exposures, but exposures that occur over the long term, from radioactive particles that are inhaled or ingested. . . These particles can fall on soil and in water and end up in the food supply for many years. We are worried that officials are measuring only the radiation that is the easiest to detect – gamma rays. Testing people for radiation on their skin or clothing is necessary, but it tells us little or nothing about what they could have breathed in or eaten—which results in internal exposure and long-term risk. [end]

“When you hear ‘no immediate danger’ then you should run away as far and as fast as you can.”

Majia Here: Dr. Yablokov's greatest concern was for plutonium. All alpha emitters are very bad for our health when ingested/inhaled, including Uranium, Polonium, Astatine, etc.
Alpha particles are comprised of two protons and two neutrons. They are emitted from unstable elements such as polonium, uranium, and plutonium, among others. You can read about their properties at Wikipedia

http://en.wikipedia.org/wiki/Alpha_particles
Alpha particles can be blocked by paper and are not thought capable of penetrating skin (although who knows given the surprises of biology).

Ingestion or inhalation of alpha emitters can be very destructive of health.

“a single α [alpha] particle can induce genomic damage in cells that were not Irradiated. Since a cell cannot receive a lower dose of radiation during exposure to α particles than a single traversal, these data suggest that at very low radiation doses the genotoxic risk  may be significantly underestimated” (Morgan, 573).
Majia here: Alpha particles can break your DNA and kill cells. They can also impact cells that were not even directly hit by the particle.Two of the most important exposure effects recently explicated are “bystander effects” and “delayed effects.”

Both of these effects can produce genomic instability. These effects were discovered as laboratory analysis examined the effects of ionizing radiation on both DNA repair and cell death.

It was discovered that “bystander” cells not directly irradiated by radiation were often impacted nonetheless.  The effects on bystander cells also could take time to develop and were therefore “delayed effects.”

Genomic instability results from these bystander and delayed effects:

“Genomic instability is an all-embracing term to describe the increased rate of acquisition of alternations in the genome. Radiation-induced instability is observed in cells at delayed times after irradiation and manifests in the progeny of exposed cells multiple generations after the initial insult. Instability is measured as chromosomal alterations, changes in ploidy, micronucleus formations, gene mutations and amplifications, microsatellite instabilities, and or decreased plating efficiency. . . . there are multiple pathways for initiating and perpetuating induced instability."  (Morgan, Non-Targeted and Delayed Effects, p. 567).

In effect, the researchers discovered that cells that initially survive irradiation are often unstable. New cells produced by the unstable cells can also be affected.

Thus, radiation-induced genomic instability can result in a “cascade of genomic events that increase the rate of mutation and chromosomal change in the progeny of that irradiated cell”; however, the precise signaling events between cells that initiate and perpetuate the instability remain undisclosed.

Research on the bystander effect has also revealed that the signaling system between cells can also stimulate DNA repair mechanisms.  Corrective cell-repair action stimulated by ionizing radiation is called “hormesis.” Unfortunately, no hormesis effects were found in the research on the effects of alpha particles I examined (and I examined quite a lot of scientific literature)

What relevance do the bystander and delayed effects have on current dose estimates given a single alpha particle can produce genomic instability? This question is relatively taboo in the scientific literature on the biological effects of radiation and it is noteworthy that it was taken up by Morgan in his review of non-targeted effects.

Unfortunately, all of this knowledge about plutonium and alpha particles offers me little protection against an un-announced plume over my home.