BREAKING: Trump Says There ‘Absolutely’ May Be A War With North Korea Soon

The president of the United States just said he was open to the possibility of a huge fallout with North Korea.

Since taking office just a few months ago, Trump has repeatedly tarnished the already sullied reputation of America. He has assassinated the characters of people based solely on their race or ability, he has been sued countless times, and accused of violating the constitution more than once.

Now, the jackass insists that, while he would prefer a less aggressive approach to solving the issue of Korea’s nuclear missile capabilities, he has no problem starting a new war. The tiny tyrant said this to Reuters Thursday afternoon:

“There is a chance that we could end up having a major, major conflict with North Korea. Absolutely.”

Those words don’t seem to phase him, as Trump likely can’t wrap his feathered head around the concept of war being an extremely detrimental thing that would cost money and lives.

The ease with which Trump talks about going to war is extremely alarming for anyone who has ever had to kiss a soldier, seamen, marine, or airmen goodbye. This is unsettling to say the very least. Americans should be terrified at the thought of Donald Trump remaining the commander-in-chief.

We can do better, America. 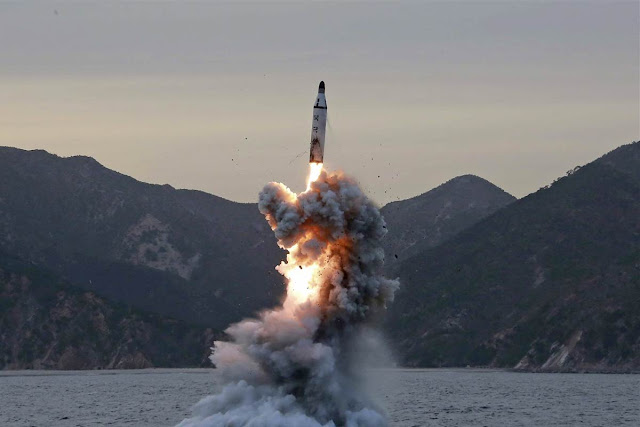 The U.S. could be headed toward a "major, major conflict" with North Korea over that nation's nuclear and missile programs, according to President Donald Trump, although he still hopes a peaceful resolution can be reached by applying diplomacy and economic sanctions.

Trump made his remarks Thursday in an interview with Reuters, saying: "We'd love to solve things diplomatically but it's very difficult."

A little more than three months into his presidency, Trump has made a resolution of the North Korean nuclear threat a top priority. He is responding to the Pyongyang regime's repeated tests of ballistic missiles, it's purported attempts to soon test another nuclear device and its bellicose words.


Trump spoke just hours after a North Korean propaganda outlet put out a video simulating an attack on America, with the White House and aircraft carriers superimposed with targets.


Trump also told Reuters that he was operating under the assumption that the 33-year-old North Korean leader, Kim Jong-Un, was rational.


He noted that the young dictator had taken control of North Korea at a young age.


Image: President Donald Trump speaks during an interview with Reuters in the Oval Office of the White House in Washington


"With that being said, he loves China and he loves the people of China. I know he would like to be able to do something, perhaps it's possible that he can't."

Trump suggested that a more troublesome showdown could be in the offing. "There is a chance that we could end up having a major, major conflict with North Korea. Absolutely," the president said in the Oval Office interview, which was scheduled ahead of his 100th day in office, which comes on Saturday.


The White House invited American lawmakers to the White House Wednesday for a briefing by the president and his national security team on the standoff. Secretary of State Rex Tillerson is expected Friday to ask the United Nations Security Council to pump up sanctions against North Korea.


The new Republican Administration has said it would consider military action to stamp out the North Korean nuclear threat. The rogue nation is already believed to have missiles that can fire a nuclear device on South Korea, Japan and other close neighbors.


Experts believe that the Kim regime is several years away from producing a rocket that could fire a nuclear warhead on the U.S. mainland.

U.S. officials have signaled that a military strike remains an option and sent an aircraft carrier and nuclear-powered submarine into the region to demonstrate strength.


But the Trump Administration has suggested that would not be a preferred option and some experts have said that an attack on North Korea would likely lead to a major counter-attack.


"There is no way to hit North Korea without being hit back harder. There is no military means to 'preempt' its capabilities — nuclear and otherwise — with a 'surgical' strike," Asia scholar John Delury wrote in an opinion piece in the Washington Post. "Any use of force to degrade its weapons program would start a war, the costs of which would be staggering."