--------------------Update: DOE CLAIMS IT DOESN'T KNOW WHAT THE RAD LEVELS WERE! JUST HIGHER THAN NORMAL BACKGROUND. RC CHALLENGES THAT STATEMENT AND DEMANDS AN ANSWER FOR THE MEASUREMENT OF THE RADS WHICH TRIGGERED THE ALERT, EVAC AND SUBSEQUENT RETURN OF PEOPLE TO THEIR HOMES. 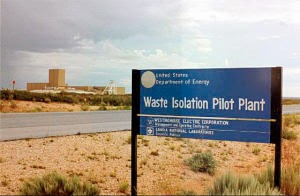 Department of Energy Officials said that all non-essential personnel were allowed to return home this evening after radioactive tests resulted in the employees testing negative for contamination.

No timetable has been set for underground re-entry and officials believe Saturday's incident is not connected to the fire that broke out on a vehicle that hauled salt in the underground north mine less than two weeks ago.

"We don't believe there is a connection between the earlier salt haul truck event and this event," said Roger Nelson, DOE spokesman. "They are obviously in different portions of the underground.

"WIPP has acted quickly and cautiously to ensure the safety of personnel and the local community," said Representative Steve Pearce Saturday afternoon. "My office remains in close contact with officials at WIPP. Full analysis of the readings is expected be available tomorrow."

Senators Tom Udall and Martin Heinrich issued a joint statement late Saturday saying, "We are in close contact with officials at the Department of Energy and WIPP, and we will continue to monitor the situation as more information becomes available. The safety of WIPP personnel and the surrounding community is of the utmost importance."

CARLSBAD -- Technicians at the Waste Isolation Pilot Plant were taking surface samples Saturday afternoon after a radiation leak was reported at the nuclear waste repository.

The airborne radiation was detected around 11:30 p.m. on Friday, according to officials with the Department of Energy. All 139 workers at the site, located 26 miles east of Carlsbad, have been accounted for and are being sequestered on site. No injuries have been reported and no personnel were underground when the facility's continuous air monitors, or CAMs, detected radiation downstream of where nuclear waste is disposed.

"These are radionuclides that are of a hazard if inhaled but it is not the kind of radiation that penetrates, and so the primary concern for the release of this nature is (through) the ventilation passageway and that's why our employees are sequestered in place," said Roger Nelson, a Department of Energy spokesman.

WIPP stores waste that primarily radiates alpha and beta-type radiation, according to Nelson.

"I can't tell you the amount or level but they were elevated and above normal, above background (levels)," Nelson said of the radiation that was detected airborne near Panel 7, Room 7, in the south salt mine.

According to Nelson this is the first time in WIPP's 15-year history that the facility has had a CAM alarm detect this level of radiation underground.

WIPP entered emergency status less than two weeks ago, when an underground fire was reported. A vehicle used to transport salt in the north area of the underground caught fire. Several employees were taken to the hospital with smoke inhalation. WIPP's underground operations have been suspended since the incident and there has been no indication whether the leak is a result of the previous emergency.