Arctic sea ice has passed its minumum for 2015

This seems to be, for all intents and purposed the final word for the 2015 season

It looks like sea ice has passed its minimum extent for the year 2015, as illustrated by the image below. 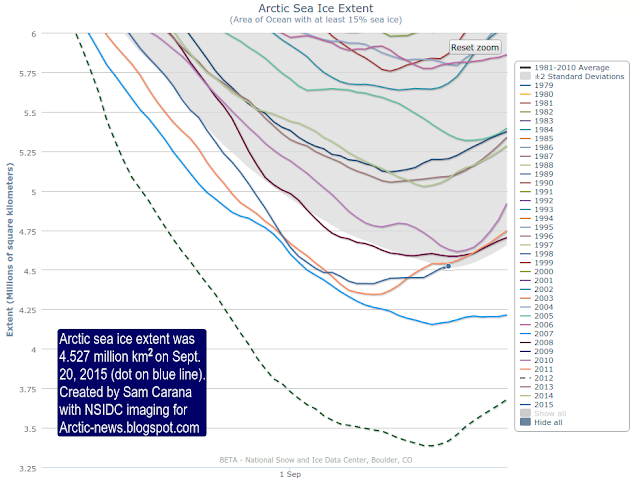 There are some differences between the various websites measuring extent, such as to whether the 2015 low was the third or fourth lowest. Japanese measurements show that sea ice extent was 4.26 million square km on September 14, 2015, i.e. lower than the 2011 minimum of 4.27 million square km, as illustrated by the image below. 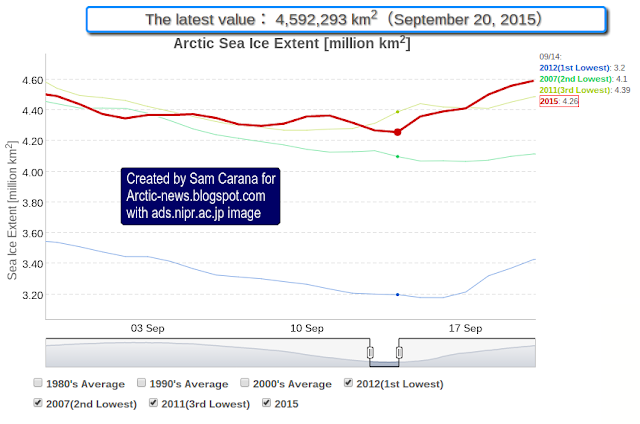 Importantly, the sea ice in many places is now less thick than it was in 2012, as illustrated by the image below, showing sea ice thickness on September 27, 2012 (panel left) and a forecast for September 27, 2015 (panel right).

The reason for the dramatic decrease in thickness of the multi-year sea ice is ocean heat, as illustrated by the image below, showing sea surface temperature anomalies in the Arctic as at September 21, 2015. 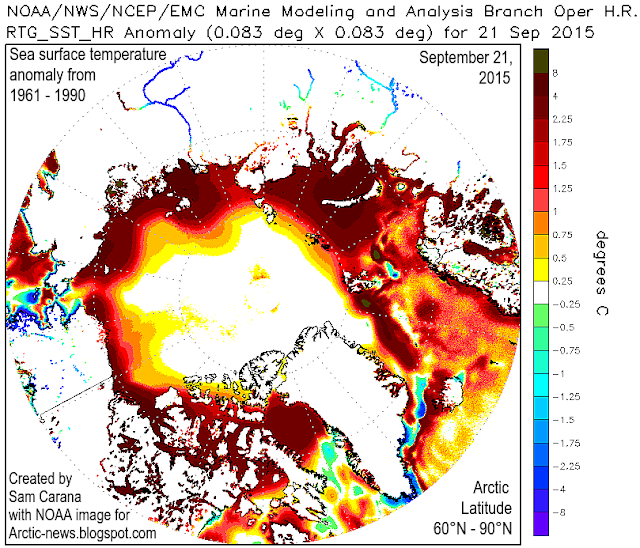 The water of the Arctic Ocean is very warm, not only at the surface, but even more so underneath the surface. What has contributed to this situation is described by the image below. From 2012, huge amounts of fresh water have run off Greenland, with the accumulated fresh water now covering a huge part of the North Atlantic.

Since it's fresh water that is now covering a large part of the surface of the North Atlantic, it will not easily sink in the very salty water that was already there. The water in the North Atlantic was very salty due to the high evaporation, which was in turn due to high temperatures and strong winds. As said, fresh water tends to stay on top of more salty water, even though the temperature of the fresh water is low, which makes this water more dense. The result of this stratification is less evaporation in the North Atlantic, and less transfer of ocean heat to the atmosphere, and thus lower air temperatures than would have been the case without this colder surface water.

Meanwhile, global warming continues to heat up the oceans, while less of this ocean heat can now be transferred from the water to the atmosphere in the North Atlantic, since the fresh water is acting like a lid.

The danger is thus that warmer water will be pushed into the Arctic Ocean at lower depth, and that it will reach the seafloor of the Arctic Ocean where huge amounts of methane are contained in sediments. Ice acts like a glue, holding these sediments together and preventing destabilization of methane hydrates. Warmer water reaching these sediments can penetrate them by traveling down cracks and fractures in the sediments, and reach the hydrates.

In the video below, by Nick Breeze, Professor Peter Wadhams discusses the situation.


The situation is dire and calls for comprehensive and effective action as discussed at the Climate Plan.

I would just add the following, from Harold Hansell

Arctic Sea Ice 09 21 2015 with pink for sea ice concentration of 15 % or less. I am thinking that what I am seeing is Arctic sea ice that has had most of it undermined by warm water 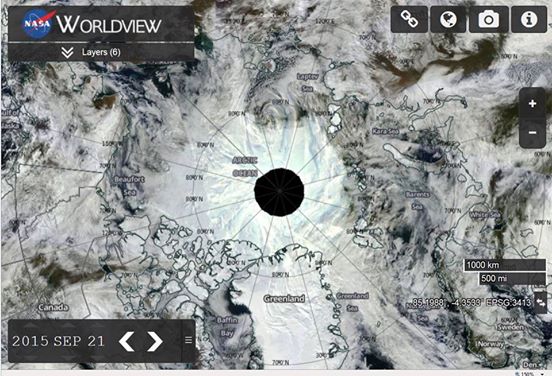 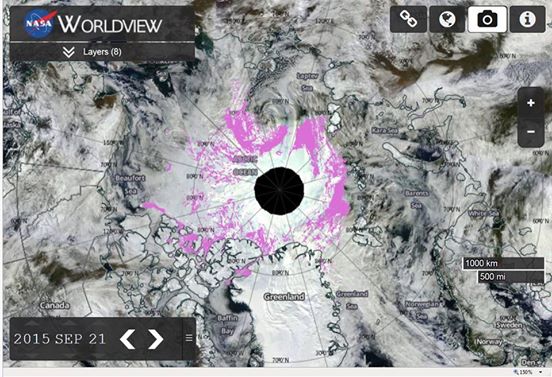