We are seeing increasing evidence of an upcoming change in the Pacific Ocean base state that favors the development of a moderate-to-strong El Niño event this Spring/Summer. To begin, here is a snap shot of global sea-surface temperature (SST) anomalies (the departure of temperature from average) 30 days ago: 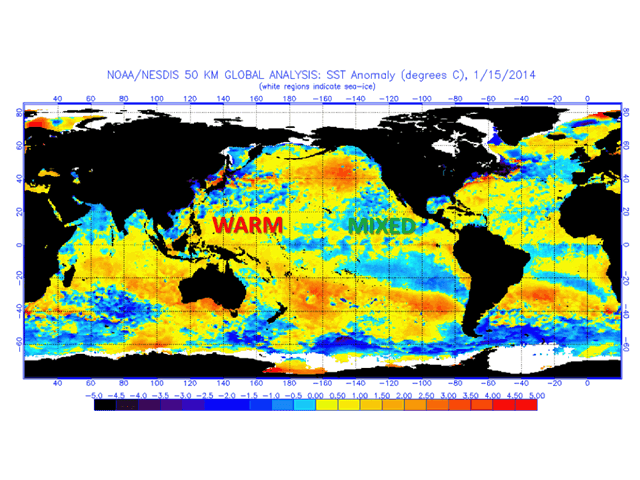 Note the relatively weak look to the SST anomaly pattern in the equatorial Pacific, with warm anomalies in the western half of the basin and mixed warm and cold anomalies in the eastern half of the basin. The mixed warm/cold signals in the equatorial eastern Pacific are the result of instability “easterly” waves in the ocean, which are associated with short distances between “warm” and “cold” phases. Now let’s compare to what the SST anomaly map looks this week: 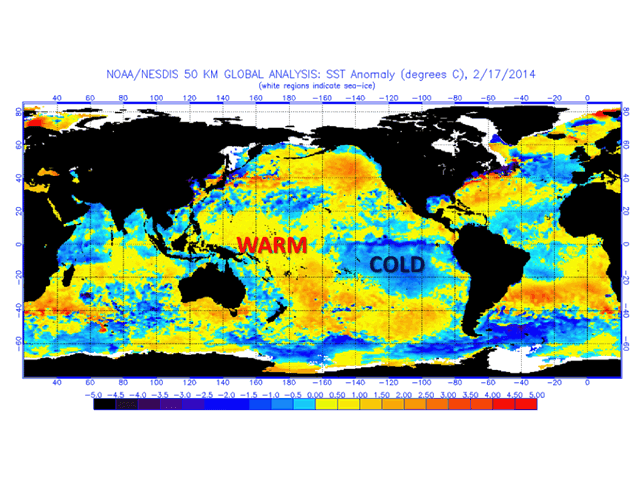 One of nature's key defenses against global warming—the reflection of the sun's rays away from Earth by Arctic sea ice—has fallen victim to... global warming. And according to a study published Monday, the vicious feedback loop is worse than previously thought.

We’ve observed strong cooling in the eastern half of the Pacific Basin, giving a spatial map that strongly resembles “La Niña”--the opposite of El Niño. So why I am pushing the idea that El Niño might be right around the corner if the map looks like La Niña!?
It comes down to ocean dynamics. There are other types of waves that are deep in the Pacific Ocean. One such wave is called an “Oceanic Kelvin Wave”. Oceanic Kelvin waves travel only from West to East at extremely slow speeds (2-3 m/s). These waves have been alluded to as the facilitators of El Niño. There two phases of an Oceanic Kelvin wave, the “Upwelling” phase and the “Downwelling” phase. The Upwelling phase of an Oceanic Kelvin wave pushes colder water from the sub-surface towards the surface, resulting in cooling at the surface. The Downwelling phase of an Oceanic Kelvin wave is the opposite, where warmer waters at the surface of the West Pacific warm pool are forced to sink, resulting a deepening of the thermocline and net warming in the sub-surface. To try to illustrate this, imagine someone holding a blanket. They rapidly lift the blanket up (Step 2) and then push it back down (Step 3).

You will get a wave in the blanket, where it travels from the source region (you) towards the opposite direction. This same exact thing happens during Oceanic Kelvin wave events, where the general wave pattern will propagate from west to east. Since Oceanic Kelvin waves travel only from west to the east, you can expect when one phase is located over a region (i.e., today an “Upwelling” phase is in the East Pacific), the opposite phase will soon to follow (i.e., the “Downwelling” phase will be in the East Pacific in 1-2 months). It may be appropriate to illustrate the evolution of the 1997 Super El Niño event to shed some more light on the similarities of the pattern then when compared to now.

Three fields are shown above in the panel of time-longitude plots. The left most figure is of the departure of the west-to-east winds (the "zonal wind anomalies') in the lower troposphere, averaged about the Equator. The figure in the middle is essentially a field to monitor the fluctuations of the thermocline in the Pacific Ocean, or can be thought of as a crude way to isolate the depth of the SST gradient. The right most figure is SST anomalies. In February and March of 1997, we observed strong westerly winds on the surface of the western Pacific (known as “westerly wind bursts”). Strong westerly wind bursts in the lower atmosphere can initiate an oceanic Kelvin wave. We observed a number of oceanic Kelvin waves that Spring, both having upwelling and downwelling phases. With each oceanic Kelvin wave event, the warm pool kept “sloshing” around until the final Kelvin wave event, which reconstructed the base state of the thermocline, and the Super El Niño was born beginning in May 1997, and lasting through April 1998. It was the strongest El Niño event ever recorded.
Let’s take a look at what happens in the sub-surface during one of these “Oceanic Kelvin waves”. Here’s an example from 2003. During the onset of an oceanic Kelvin wave, you will see strong sub-surface warming in the western Pacific, and strong cooling near the surface in the Pacific. With time, the warming pushes eastward in the sub-surface, eventually eroding the cold anomalies in the East Pacific surface, which switch to warm anomalies thereafter.

Some Oceanic Kelvin waves are not strong enough to reconstruct the Pacific Ocean base state, and will only result in minor adjustments. One way to see this is by using the current 20°C isotherm depth and anomaly Hovmoeller plots from February 2014 below. The black solid line represents the center of the “Downwelling” phase (or warming in sub-surface phase); the black-dashed line represents the center of the “Upwelling” phase (or cooling at surface phase).

There have been a series of 3 strong Kelvin waves over the past 7 months. Each Kelvin wave pushed some water from the West Pacific Warm Pool towards the East Pacific, but the subsequent upwelling phase resulted in cooling. This week, a very strong “Upwelling” phase of a Kelvin wave is pushing across the Eastern Pacific, forcing colder waters from the subsurface towards the surface, cooling the Eastern Pacific surface waters. This cooling has put the index we use to track El Niño--the so-called "ENSO 3.4 index"--at -0.5°C, right at the border of La Niña conditions. This is happening while warm surface water is being pushed down into the sub-surface, resulting in massive warming below the surface. Here is the evolution of the sub-surface SST structure beginning in January and ending this week:

Note that there has been strong cooling in the East Pacific, associated with the strong “Upwelling” phase of the Kelvin wave and strong sub-surface warming in the western-central Pacific associated with its “Downwelling” phase. This strong Oceanic Kelvin wave is the reason why today’s SST anomaly snap-shot map has the appearance of a strong La Niña, but is just the result of processes occurring in the Pacific Ocean at sub-seasonal time scales.
The current Kelvin wave in the Pacific Ocean has achieved the same strength as the one that preceded the 1997 Super El Niño event. This is an extremely rare feat but there still has to be a number of things to happen before we can say we are headed towards a strong El Niño. We need to see the continuation of strong westerly winds near the Equator over the Central Pacific to keep the momentum forward.
What caused the development of the strong Oceanic Kelvin wave? A strong westerly wind burst (WWB1) was observed during January 19 - 30 over the equatorial West Pacific:

Note from the time-longitude plot of Madden Julian Oscillation (MJO) filtered velocity potential anomalies at 200 mb (VP200), the convectively active phase of the MJO passed across the Western Pacific in late December through early January. Therefore, WWB1 on January 19 - 30 was likely driven by other features in the atmosphere other than the MJO:

Looking more into the finer details, there was a pair of strong gyres (or “low pressure systems”) mirroring each other about the Equator. One gyre set up shop over the Philippines, and caused major flooding. The gyre south of the Equator set up over northern Australia, and also produced a great deal of precipitation and thunderstorm activity.

Since the flow in the Northern Hemisphere around a low pressure system (or gyre) is counterclockwise, it produces low-level westerly flow to the south of the gyre. Vice versa, flow around a low pressure system in the Southern Hemisphere is clockwise. Thus, to the north of the low, there is also accelerated westerly flow. The net combination of these gyres over the equatorial West Pacific aided in a significant westerly wind burst in late January, as these gyres persisted for nearly 1-2 weeks.
Note that the GFS forecast calls for another amplification of mean westerly flow about the Equator west of the Date Line February 18 - 28 (WWB2). Looking at the 1000mb standardized geopotential height anomaly map, the forecast calls for *two* sets of twin cyclones mirroring each other about the Equator, with one of the Southern Hemisphere gyres forming into a tropical cyclone near the Date Line!

The pair of twin cyclones will likely amplify westerly flow in the medium range, and would likely keep the forward momentum of the Oceanic Kelvin wave, providing more evidence in a possible change of the base state in the Pacific. The kicker for a full blown 1997-like Super El Niño to develop would likely be some additional assistance from the development of early-season Pacific tropical cyclones near the Equator, as the GFS model is starting to hint at south of the Equator. Note that the 1997 Super El Niño event had the help from Category 5 Super Typhoon Isa during early April, which developed close enough to the Equator over the Central Pacific to produce another significant westerly wind burst there, and continue to push the West Pacific Warm Pool eastward.

So as it stands now, the ocean has geared in towards another big eastward push of the West Pacific Warm pool towards the East Pacific. We do need to see more westerly winds develop across the Central Pacific to completely swap the base state this Spring. This piece of the puzzle is difficult to predict at such long time-scales, but there are some indications for this to occur at least in the medium-range. Both the CFSv2 and European seasonal model forecasts are extremely aggressive with this transition to El Niño idea, as shown in the time series plots below:

What does this mean for the U.S. this summer? Well, why it’s still a bit early to be certain, typical conditions over the U.S. during strong El Niño’s favor a ridge over the West and a trough over the East. Therefore, you typically see warmer than average summers over the West Coast, and colder than average temperatures over eastern two thirds of the nation, as shown by a simple surface temperature correlation map with the ENSO 3.4 index:

BOTTOM LINE: The Pacific Ocean is now in a state that could reconstruct the base state of the Pacific, favoring an El Niño to develop later this Spring. That being said, it’s not a locked in solution yet as we need to monitor the atmosphere for future westerly wind bursts to help push the Western Pacific Warm Pool along. Thanks go to NOAA for providing the majority of the images used in this post.
Michael Ventrice

Dr. Michael Ventrice is an operational scientist for the Energy team at Weather Services International (WSI), who provide market-moving weather forecasts and cutting-edge meteorological analysis to hundreds of energy-trading clients worldwide.  Follow the WSI Energy Team on Twitter at @WSI_Energy and @WSI_EuroEnergy