Guy McPherson is visiting New Zealand in the next 2 weeks

British economist John Maynard Keynes (1883-1946) is well known for his views on monetary policy. The printing-press approach he forwarded is widely used today, even as especially as the world-wide Ponzi scheme nears its end. My favorite line from Keynes: “In the long run, we’re all dead.”

As I pointed out in this space a few years ago, I concluded in 2002 that we had set into motion climate-change processes likely to cause our own extinction by 2030. I mourned for months, to the bewilderment of the three people who noticed. And then, shortly thereafter, I was elated to learn about a hail-Mary pass that just might allow our persistence for a few more generations: Peak oil and its economic consequences might bring the industrial economy to an overdue close, just in time. Like Pandora with her vessel, I retained hope.

No more. Stick a fork in us. We’re done, broiled beyond hope wishful thinking. It seems we’ve experienced a lethal combination of too much cheap oil and too little wisdom. Yet again, I’ve begun mourning. It’s no easier the second time.

As always, I’m open to alternative views — in fact, I’m begging for them, considering the gravity of this particular situation — but the supporting evidence will have to be extraordinary. By the way, irrationally invoking Al Gore doesn’t count as evidence. Ditto for unsubstantiated rumors about global cooling. A small dose of critical thinking might be required, rather than the ability to repeat lines touted by neo-conservatives and their owners in the fossil-fuel industries.

Before you launch into the ridicule I’ve come to expect from those who comment anonymously from a position of hubris and ignorance in the blogosphere, I invite you to fully consider the information below. I recommend setting aside normalcy bias and wishful thinking as you peruse the remainder of this brief essay. (While you’re at it, go ahead and look up the word “peruse.” It probably doesn’t mean what you think it means. I’ll make it easy: Here’s a link to the definition.)

We know Earth’s temperature is nearly one degree Centigrade higher than it was at the beginning of the industrial revolution. And 1 C is catastrophic, as indicated by a decades-old cover-up. Already, we’ve triggered several positive feedbacks, none of which were expected to occur by mainstream scientists until we reached 2 C above baseline global average temperature.

We also know that the situation is far worse than indicated by recent data and models (which are reviewed in the following paragraphs). We’ve known for more than a decade what happens when the planes stop flying: Because particulates were removed when airplanes were grounded, Earth warmed by more than 1 C in the three days following 11 September 2001. In other words, Earth’s temperature is already about 2 C higher than the industrial-revolution baseline. And because of positive feedbacks, 2 C leads directly and rapidly to 6 C, acidification-induced death of the world’s oceans, and the near-term demise of Homo sapiens. We can’t live without life-filled oceans, home to the tiny organisms that generate half the planet’s oxygen while comprising the base of the global food chain (contrary to the common belief that Wal-Mart forms the base of the food chain). So much for the wisdom of the self-proclaimed wise ape.

I’ve detailed the increasingly dire assessments. And I’ve explained how we’ve pulled the trigger on five positive-feedback events at lower global average temperature than expected, while also pointing out that any one of these five phenomena likely leads to near-term human extinction. None of these positive-feedback events were expected by scientists until we exceed 2 C warming above the pre-industrial baseline.

My previous efforts were absurdly optimistic, as demonstrated by frequent updates (for example,here, here, and here, in chronological order). Yet my frequent writing, rooted in scientific analyses, can barely keep up with increasingly terrifying information about climate change. Every day, we have more reliable knowledge about the abyss into which we have plunged. Consider, for example, the International Energy Agency’s forecast of business-as-usual leading to a 6 C warmer planet by2035. Malcolm Light, writing for the Arctic Methane Emergency Group, considers one of the many positive feedbacks we’ve triggered in one planetary region and reaches this conclusion: “This process of methane release will accelerate exponentially, release huge quantities of methane into the atmosphere and lead to the demise of all life on earth before the middle of this century.”

Please read that sentence again. Light is a retired earth-systems scientist. As nearly as I can distinguish, he has no hidden agenda, though he believes geo-engineering will save us (an approach that would take several years to implement, and one that we’d almost certainly FUBAR).

Forecasts by the International Energy Agency and the Arctic Methane Emergency group match the recent trend of increasingly dire assessments based on collection and interpretation of more data and increasingly powerful models. If these forecasts are close to accurate, we’ve only a requiem to write for human beings on Earth.

It’s time to modify Keynes’ famous line thusly: “In the short run, we’re all dead.” For those of us living in the interior of a large continent, much less on a rock-pile in the desert, I’d give us until 2020 at the latest. Carpe diem, reveling in the one life we get.

What, then, shall we do? As I contemplate the shackles we’ve created for ourselves, the words of Albert Camus come to mind: “The only way to deal with an unfree world is to become so absolutely free that your very existence is an act of rebellion.” In terms of action, I hardly know what that means for me, much less for you. But I encourage any and every act of liberty and rebellion, particularly as the world burns.

I’m often asked why people living in industrialized nations shouldn’t relent to hopelessness and party like hedonists as the world burns. My typical response is to ask how our lives would be different if we suddenly starting acting like hedonists.

Except when I am presenting at a conference or symposium, nearly all events are free and open to the public. At some events, donations are accepted to cover my travel costs. 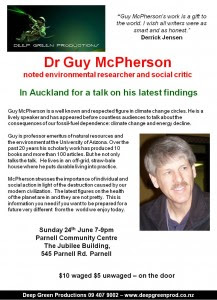