More on Victoria fire - Morwell to be evacuated 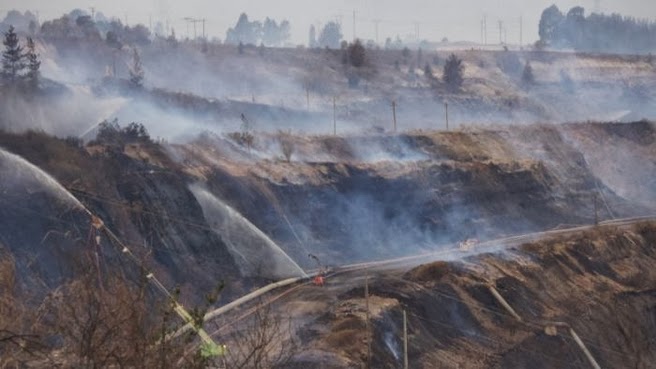 Premier Denis Napthine is refusing to confirm or deny the speculation, except to say that he will be making an announcement in Morwell at 1pm (AEDT) with health and fire officials.

Dr Napthine says the Government has done enough to provide a break for residents trapped indoors by the smoke.

"We are running respite centres, we will be looking to have broader respite options over the weekend when families and people who are normally week day workers have the opportunity to get out of Morwell," he said.

The town has been in the path of a choking stream of smoke coming from a fire at the Hazelwood coal mine which has been burning since February 9.

Residents are complaining of headaches and trouble breathing.

People with chronic heart and lung conditions, the elderly, pregnant women, smokers and children, are being advised to stay indoors.

A Latrobe City Councillor says the State Government should be doing more to help the residents.

Councillor Graeme Middlemiss says the Government should pay to evacuate the most vulnerable people.

"I just don't know why we are leaving people in this atmosphere who are at risk from it," he said.

As recently as yesterday the Government was calling on Victorians to give up their empty holiday houses to give those in the path of the smoke a break.

The main health concern surrounds exposure to small particulates found in the air and smoke.

The invisible particles, known as PM2.5, can penetrate the deepest part of the lungs and respiratory system.

A study published in the British Medical Journal last month found only a small increase in this particulate matter can lead to an increased risk of heart attacks and lung cancer.

The concentration of these particulates reached 280 micrograms per cubic metre in Morwell South on Thursday, more than 11 times Australia's daily threshold.

The study's lead researcher, Guilia Cesaroni from the Department of Epidemiology at Rome's regional health service, studied more than 100,000 people in five European cities over a decade.

"We found an association between increased levels of PM2.5 and mortality and also with incidence of lung cancer," she said.

Dr Cesaroni found an increase in annual exposure to PM2.5 of just 5 micrograms per cubic metre means a 13 per cent increased risk of heart attack.

She calls the Morwell reading of 280 micrograms per cubic metre "a huge level".

Dr Cesaroni says it would lead to more hospital admissions and, if the area is largely populated, "an excess in mortality" if the readings continue for a month or more.

"For sure there will be an increase in the annual average, but at the moment I would be more worried about the immediate effect," she said.