Carlsbad Environmental Monitoring and Research Center, Feb. 20, 2014: Scientists [...] have detected trace amounts of the radioactive isotopes Americium (241Am) and Plutonium (239+240Pu) on an air filter from an ambient air sampling station located approximately 0.6 of a mile northwest of the WIPP [...] Analyses of this filter show that 0.64 Becquerels (Bq) of 241Am and 0.046 Bq of 239+240Pu were found to be deposited on the filter media. The Becquerel is an international unit of measure of radioactivity and is defined as one disintegration per second. 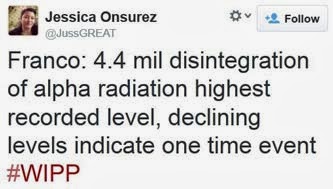 City of Santa Fe, NM Emergency Management, week ending Feb. 23, 2014: Late last week a radiation leak was detected in an underground chamber of the Waste Isolation Pilot Plant (WIPP) just outside of Carlsbad. This marked the first serious incident involving radiation at the WIPP site and comes just weeks after a truck fire [...] it is important to understand the effects different types of radiation can have on the human body and how to protect yourself in the extremely rare event that you are exposed to radiation either accidentally or through a deliberate attack.
Carlsbad Current-Argus, Feb. 22, 2014: Meanwhile, an organization affiliated with the Department of Labor began reaching out to employees who are worried they may have been exposed to health risks from the radiation.


And: LA Times: Expert says 'radiological process' may have forced material out of container at US nuclear site, "Could be a mess"; Officials saying little about extent of problem -- Levels remain too high to let in non-essential personnel -- Air monitors not allowed to collect filters
Posted by seemorerocks at 14:35