Like a Volcano Slowly Awakening at the Top of our Earth From Baffin Bay to the Laptev Sea, Arctic Methane Monster Releases Troubling Outbursts 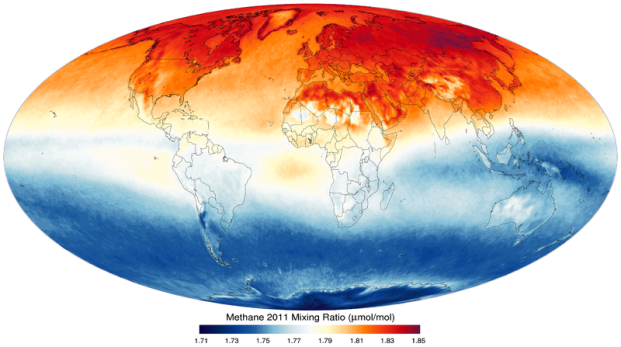 (Initial methane out-gassing shows a tell-tale methane overburden in the troposphere near Arctic ocean and tundra methane sources in 2011. Just one of many signs of what may be a very large, impending methane eruption. Image source: NASA/AIRS.)

The most dangerous of volcanoes have a number of identifiable behaviors.
They tend to lay dormant for hundreds, thousands, or tens of thousands of years. Then, slowly, as heat and pressure beneath the Earth builds, they begin to awaken. First they tremble a bit. Then they emit a growing volume of noxious gas. Then, they begin a series of mini-outbursts in an ever more violent build-up to an explosive and destructive grand eruption.
The lost residents of Pompeii, were they here today, could tell us what such an event is like.
Now consider that a volcano-like thing also exists beneath the world’s frozen oceans and lands near the roof of our world. A thing that probably hasn’t erupted in over 45 million years. A thing that has had this immense period of time in which to build up an enormous highly toxic and explosive reserve of frozen and sequestered methane. A thing that is at least as large as the boundary circumscribed by the Arctic Circle. A vast and extraordinarily dangerous monster of a thing. A kind of climate super-volcano.
For ever since the Earth began its long fall into cooling at the end of the Eocene, methane has been freezing at the bottom of the world’s oceans, sequestering in the frozen earth. As world land and ocean temperatures fell, the methane formed into clathrates or was bound up in organic permafrost and was, ever-after, locked away. There it lay patiently, waiting for the time when it would be, once again, disturbed by a return to warmth.
And that time of dangerous and explosive reawakening, increasingly, seems to be now.
Footprint of the Vast Volcanic Monster: Shallow Seas, Deep Seas, Permafrost
Of these volatile methane concentrations, some of the most prolific and the most vulnerable reside in the Arctic. Some, which lay sequestered within the shallow sea bed near the East Siberian Arctic Shelf, have been the subject of much controversy during recent years. Scientists like Natalia Shakhova and Peter Wadhams have issued repeated warnings that these methane stores could be vulnerable to a rapid release as sea ice retreats and waters warm. It is estimated that as much as 1400 gigatons of methane lay sequestered under Arctic submarine permafrost in the ESAS. A massive store that, if disturbed even in part, could provide an immense amplifying feedback to human-caused warming.
But the Arctic submarine permafrost isn’t the only zone in which large volumes of methane lay hidden. The Amundsen Basin, one of the deepest trenches in the Arctic Ocean, in the Laptev Sea is a known emitter of methane from sub-sea sources. A region near Svalbard both stores and emits large volumes of methane. And, recently, high rates of methane release have been observed near Baffin Bay. A complete catalog of these stores has not been adequately assessed. But, in combination, it is likely that they at least approach the total volume of stores in the vulnerable East Siberian Arctic Shelf (ESAS) zone.
Ominous Rumblings from the Rapidly Warming Deeps
These stores are deeper beneath the ocean surface and so are not generally thought to be as vulnerable as the shallow sea reserves in the ESAS. But this thinking may be in error as Arctic waters display a temperature inversion in which surface waters near the ice pack are colder than deeper waters far below.
In addition, wide zones of deep water in the Arctic have displayed rapid warming over the past few decades. As an example, bottom waters in the Greenland Sea, an area between the east coast of Greenland, Iceland and Svalbard, were shown in a September 2013 study to be warming 10 times faster than the rest of the world’s deep ocean system. According to the report:
Recent warming of the Greenland Sea Deep Water is about ten times higher than warming rates estimated for the global ocean. Scientists analyzed temperature data from 1950 to 2010 in the abyssal Greenland Sea, which is an ocean area located just to the south of the Arctic Ocean. 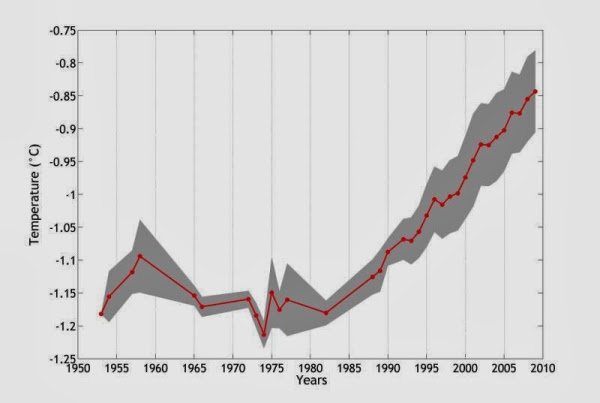 (Deep Water Warming in the Greenland Sea since 1950. Image source: Science Daily. Image credit: Alfred Wegener Institute, Helmholtz Centre for Polar and Marine Research.)
In other regions of the Arctic and through the rest of the global ocean system rapid ocean bottom warming has also been observed. Recent studies by Kevin Trenberth have found that heat accumulation in the deep ocean, during recent years, has outpaced that of warming at or near the surface. And because this warming occurs adjacent to frozen methane stores on or beneath the sea floor, it is a very, very dangerous development.
To the point of an observed rapid warming of the deep ocean, it is important to note that there are a number of mechanisms that transport heat into the abyss worldwide. But in the Arctic, this transfer system is amplified and particularly intense. Fresh, cold surface waters tend to deflect warmer, saltier waters funneling in from more southerly latitudes toward the Arctic Ocean bottom. As glacial ice melts in Greenland, as storms within the Arctic intensify and become more prevalent, and as fresh water runoff from the continents surrounding the Arctic basin increases, fresh water content at the surface grows and widens, creating a kind of fresh water wedge that expands southward and deflects warmer, saltier water toward the ocean bottom.
And there, the warmer waters can go to work releasing the massive volumes of methane stored in frozen clathrates near the ocean floor.
Large Mid-February Methane Belch
Methane released from deep water clathrate stores has a long journey before it reaches the atmosphere. The methane passes through the water column, where a portion of it oxidizes into CO2. Microbes near the methane source and throughout the water column devour a portion of the methane as an energy source. But eventually, if the pulse is large enough, the methane finds its way to the surface and releases. Such outbursts are, likely, only a fraction of the initial bottom release. So a large expulsion into the atmosphere may well be a hint that something even more powerful and energetic is going on down below.
Over the past decade, deep water regions have shown at least as much atmospheric venting as the East Siberian Arctic Shelf. And this year has been no exception with troubling outbursts continuing in a zone from Baffin Bay to Svalbard to the Laptev Sea. These outbursts have, in part, contributed to increasing atmospheric methane concentrations at a rate of around 7 parts per billion each year since 2007 after an 8 year period during which global methane levels had plateaued at around 1790 parts per billion. By comparison, pre-industrial global methane levels were around 750 parts per billion during the 1880s. Today, they average around 1835 ppb (Mauna Loa). Should very large outbursts emerge, the rate of atmospheric methane increase would be expected to dramatically steepen. And though we haven’t yet seen these kinds of outbursts, more minor, but still large and concerning, continue to occur with troubling frequency.
This past week, according reports from Methane Tracker and Sam Carana, two particularly large and troubling ocean to atmosphere methane outbursts were observed in this region — one over the Laptev Sea and the other over Baffin Bay. The Baffin Bay outburst occurred in a zone where water depths ranged from 1,000 to 2,500 meters (middle to deep ocean) and the Laptev outburst likely occurred from the deep waters and precipitous slopes of the Amundsen Basin which plunges as deep as 4,400 meters (extraordinarily deep ocean) and extends almost directly under the North Pole. 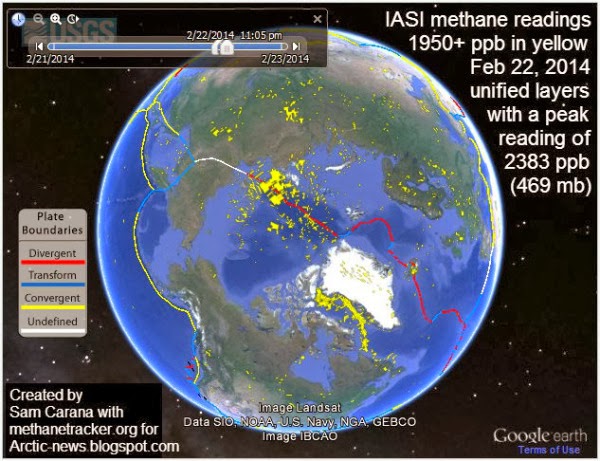 From these outbursts, 10,000 foot methane concentrations of 2383 ppb were observed. These readings are about 500 ppb higher than the global average and represent an extraordinary local spike for the Arctic.
The outbursts occurred in a region where the fresh water wedge was most recently active — areas where sea ice keeps expanding then melting and retreating as warmer, saltier waters encroach. Regions where the warmer water column would be continuously flushed toward ocean bottom zones containing methane hydrates.
If we were to continue with the volcano analogy, we could well consider the most recent Laptev and Baffin Bay outbursts to be a series of minor but intensifying eruptions. The most recent in a string of troubling and increasingly more volatile activity from the methane volcano rumbling at the top of our planet.
Links:
Deep Greenland Sea is Warming Faster than the World Ocean
Global Heating Accelerates, Deep Ocean Warming the Fastest, What Does it Mean for Methane Hydrates?
Methane Tracker
NOAA ESRL
Massive Methane Concentrations over Laptev Sea
2013 4th Hottest Year on Record, Deep Ocean Warming Fastest
Triggers to Release the Methane Monster, Deep Ocean Warming, Sea Ice Melt, Sea Level Rise and the Fresh Water Wedge
Methane Emissions From ESAS Occurring at Twice the Expected Rate
The Arctic Methane Monster Stirs
Beneath the Cracking, Melting Ice, The Arctic Methane Monster Continues it Ominous Rumblings

Posted by seemorerocks at 10:46