Elite US troops trained to use backpack nukes 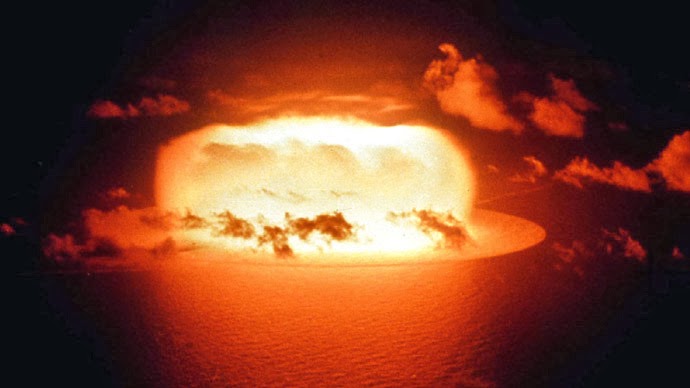 
Skiing down a mountain and into a battlefield with a nuclear bomb strapped to your back seems like something you’d see only in a James Bond movie, but that’s just one of the things the US elite military personnel were trained to do during the Cold War.


In a detailed report by Foreign Policy, the publication chronicles the creation of the Special Atomic Demolition Munition (SAMD), a portable nuclear weapon that could be carried into battlefield by a single solider. During the Cold War’s final 25 years, Navy SEALs and Army Special Forces were trained to carry these “backpack nukes” beyond enemy lines where, if necessary, they'd be used to destroy valuable infrastructure and keep opposing forces at bay.
Concerned with the Soviet Union’s military advantage over the United States and its allies in terms of manpower and traditional weaponry, President Dwight Eisenhower looked to enhancing the country’s nuclear capabilities as a way to level the playing field. His “New Look” strategy, however, promised “massive retaliation” to any form of aggression by the Soviet Union – a bold strategy that in reality left the US with little room to maneuver.
“In the event that communist forces launched a limited, non-nuclear attack, the president would have to choose between defeat at the hands of a superior conventional force or a staggeringly disproportionate (and potentially suicidal) strategic nuclear exchange that would kill hundreds of millions of people," the report stated.

In an attempt to develop targeted nuclear weapons that wouldn’t cause as many casualties, the SAMD was born. Often strapped to a soldier’s back, the 58-pound bomb made it difficult for soldiers to maneuver through a war zone, and those chosen to carry the device – known as the “Green Light” teams – underwent extensive training to ensure they could deliver the bomb, even at the expense of their own lives.
"I think that my first reaction was that I didn't believe it," former Green Light member Ken Richter told Foreign Policy. "Because everything that I'd seen prior to that, World War II, showed this huge weapon. And we were going to put it on our backs and carry it? I thought they were joking."

More powerful than the bomb dropped on Hiroshima, though, the SAMD was no laughing matter. US forces would be subjected to eight to 12 hours of training a day when it came to using the device, and in some cases troops would parachute out of planes with the SAMD dangling below them in a protective case, dive underwater with it in a pressurized case, or, yes, ski down a mountain with bomb attached to them.
"I had a lot of people that I interviewed for our team,” Richter recalled. “Once they found out what the mission was, they said, 'No, thanks. I'd rather go back to Vietnam.' "

Fortunately, these weapons were never actually used. US allies were not particularly fond of the idea of detonating numerous nuclear devices across their countries, while others within the American military questioned the whole enterprise.
"In our hearts, we knew nobody was going to give control of these to a bunch of big old boys running around the countryside," Tom Davis, another Green Light member, told Foreign Policy. "We just didn't believe it was ever going to happen."

The SADM program was officially halted in 1989, after the Defense and Energy departments found it to be “obsolete.”
This, however, wasn't the only controversial idea the United States tested during the Cold War. A lawsuit is currently unfolding in federal court concerning a military program that subjected servicemen to various secret drug and chemical experiments. The US hoped to discover new ways to control human behavior, pinpoint weaknesses, hypnotize, and increase an individual’s resistance to torture.

As a result, many former soldiers have come forward claiming that their long-term health problems are a direct product of the experiments conducted on them. The Department of Veterans Affairs has generally declined to cover the health costs of these individuals, though just recently a federal judge ruled the US must notify all veterans of any potential health problems stemming from the experiments.